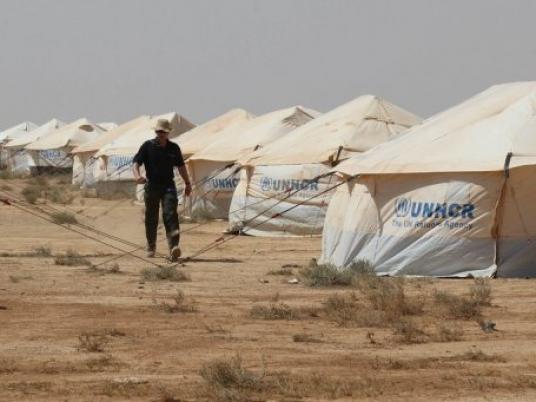 Egyptian authorities' decision to introduce new restrictions on Syrians travelling to Egypt is a response to internal security developments, a Foreign Ministry spokesperson said Tuesday.
Officials denied the move had anything to do with Egypt's support for the Syrian opposition against President Bashar al-Assad.
"This decision does not affect in any way initial Egyptian support for the Syrian revolution and the struggle of the Syrian people…to achieve their hopes and aspirations in democracy and pluralism," said the spokesperson in a statement Tuesday.
He called on Syrians residing in Egypt, or those looking to move there, to following the laws of the Egyptian state and bear in mind current security conditions.
New procedures do not impinge on the historical relationship between Egypt and Syria, the spokesperson stressed.
Authorities at Cairo International Airport banned 276 Syrian passengers from entering Egypt on Tuesday, citing their failure to obtain security approvals and visas, new procedures aimed at limiting jihadist elements from moving from Syria to Egypt.
A security source at Cairo airport said  200 passengers coming from Damascus were turned away.
Seventy-six Syrian passengers coming from Beirut were deported for the same reason, he said.

"There is a decision from Cairo that any Syrian travelling to Egypt must apply for a visa at the Egyptian embassy," AFP quoted a staff member at the Egyptian consulate in Beirut as saying.

"A decision will be made some 10 to 15 days after the traveller has made his visa application," he said.

"I don't know whether this change is temporary or permanent. All I know is that it applies as of Monday," he added.

The United Nations says nearly 90,000 Syrians have registered with the High Commissioner for Refugees in Egypt.

But the actual number of Syrians who have sought refuge in Egypt is believed to be much higher, in part because the country did not require Syrians to have visas until this week.

"Syrians now need a visa to go to Cairo. I have no information on the reasons behind the change," said a telephone operator.

MEA flights from Beirut to Cairo are frequently packed with passengers who have fled Syria by road into Lebanon, and then continue on by air to Egypt.

The confirmation of the new policy comes a day after several reports emerged of Syrians who were turned back on arrival in Cairo.

Egypt's state newspaper Al-Ahram reported Monday that passengers on a flight from the coastal Syrian city of Latakia were refused entry.

Though he was eventually allowed into Cairo, prominent Syrian dissident Haytham al-Maleh waited for permission from the Egyptian authorities at the airport for two hours, he told AFP.

"I have connections, and I was able to secure permission to enter Cairo after two hours waiting in the airport," Maleh said.

"But I saw some 25 Syrian families being made to wait before deportation," he added.

"We are surprised by the decision, especially because it comes from Egypt, which is a sister nation to Syria," said Maleh, who is a member of the main Syrian opposition National Coalition and who is based in Cairo.

He said the Coalition is working to convince the Egyptian authorities to cancel the decision.

Egypt has seen unprecedented unrest since June 30, when massive demonstrations calling for President Mohamed Morsy to resign led the military to oust him.

Reports emerged on Monday that Palestinians looking to return home to the Gaza Strip via Cairo were also being turned away by the authorities.