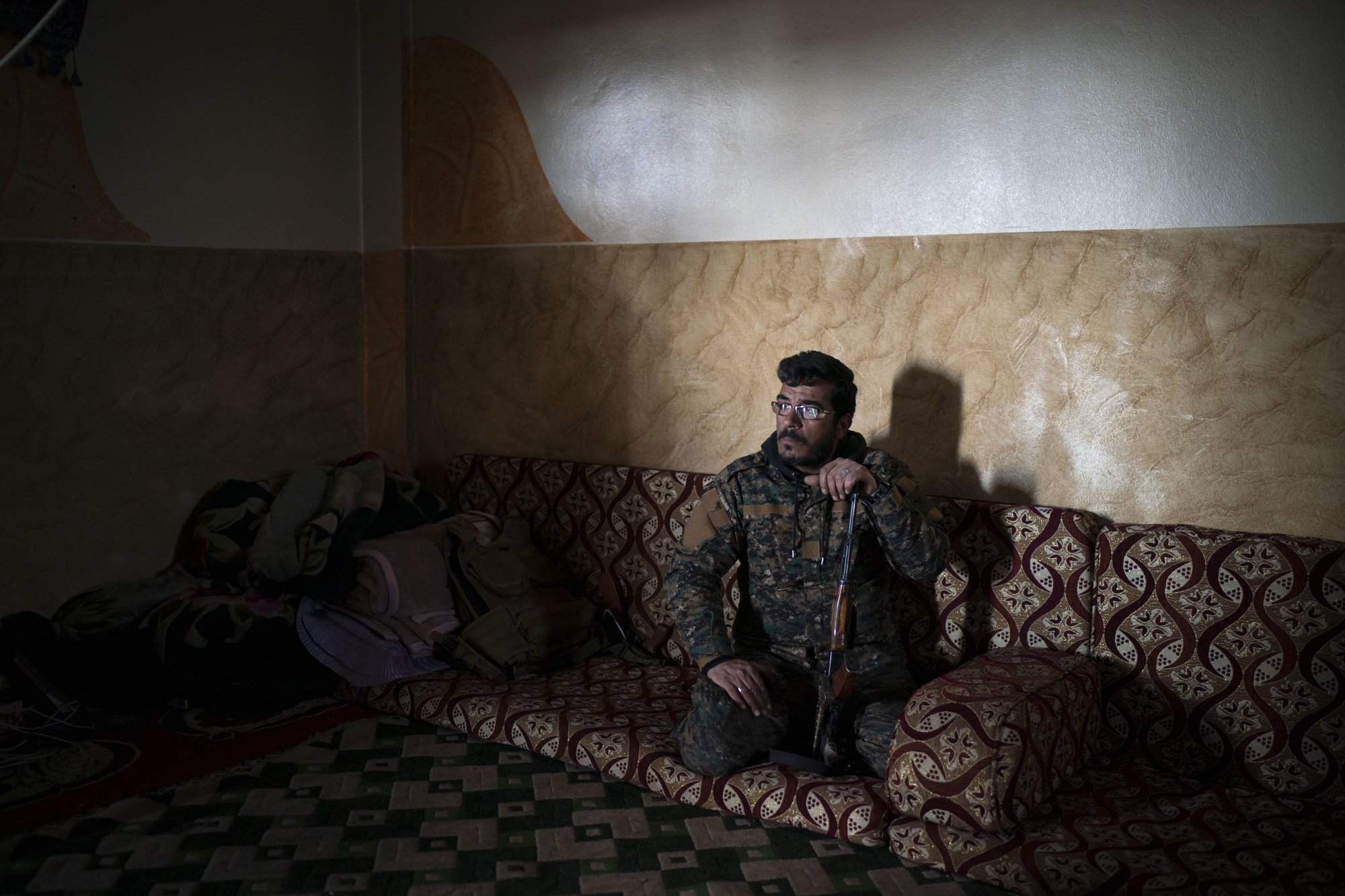 BAGHOUZ, Syria (AP) — War is personal. And in Syria, after eight years of a grinding conflict, there are as many stories of loss, dispossession and desperate hope as there are people.

What started as peaceful protests in 2011 asking for government change turned into one of the cruelest modern wars and left a trail of broken lives among the country’s pre-war population of 23 million. Now half are displaced, nearly half a million dead and many live with permanent scars or have joined militias.

The years of war have left their mark on Dia Hassakeh’s 45-year old face. The Arab fighter in the Kurdish-led US-backed Syrian Democratic Forces has seen his family suffer on the conflict’s many fronts.

In the early days of the conflict, two of his brothers were wounded fighting in the government military against the armed opposition. In November, another brother was killed by the Islamic State group. Now Dia is battling the militants at IS’ last holdout, a speck of territory along the Euphrates River near the Iraqi border called Baghouz.

“As Syrians, every citizen has paid the price,” he said, speaking just outside Baghouz. He took the name of his hometown Hassakeh as a nom de guerre when he joined the SDF.

While the Islamic State group’s territorial defeat will close one bloody chapter, Syria is still wracked by conflict on the eighth anniversary of its long-running civil war.

Syrian President Bashar Assad’s government appears to have won the war against the insurgency trying to topple him. But much of the country is out of Assad’s hands. The northeast and east, wrested from IS, is largely held by the US-backed Kurdish-led forces. But their fate as well is uncertain. Though President Donald Trump announced he would withdraw American troops, the US is apparently keeping a small force, hoping to encourage the Europeans to strengthen their presence to protect its Kurdish allies from their nemesis Turkey, and counter Iran’s expansion in the region.

Militants are still a potent force. The Islamic State group has planted the seeds to wage an insurgency. The northwestern province of Idlib — an opposition stronghold throughout the war — is home to other jihadists as radical as IS. Nearly 3 million Syrians live in the province, most displaced from other parts of Syria that fell under government control. A Turkish-Russian truce that averted a government assault on Idlib and took pressure off Assad is fraying, threatening new bloodshed.

Assad remains hostage to his massive need for cash to rebuild and his reliance on his allies, Russia and Iran, which are pursuing their own interests. Moscow wants to keep access to the Mediterranean and a position to challenge the West; Tehran is keeping an array of militias in Syria to preserve its domain of influence stretching from Iraq to Lebanon.

And public opposition is not extinguished.

Like Groundhog Day, protesters in southern Syria took to the streets of Daraa, the city where the 2011 anti-government rallies first erupted and where the government only finally managed to re-establish control last year. Men and children this month held day and night protests chanting against Assad after authorities planned to erect a statute for his late father.

Within this maze of conflicts, players and interests, Syrians try to find their way.

Dia never liked the anti-government protests. When they erupted in 2011, he left Hassakeh — in the northeast of Syria — to live in northern Iraq. There, while two of his brothers fought in the military against the rebels, he ran a home appliances business and sat out the war — until the war caught up with him unexpectedly. The Islamic State group, feeding off Syria’s chaos, swept over much of Syria and northern Iraq. Dia returned to Hassakeh and found the militants closing in on his home province.

He volunteered to fight against them to “protect our family, land and country,” he said.

He blames outsiders— militants and superpowers — for breaking up his country. Having fought in the SDF and served in his own government’s army before the revolts, he still believes the country will be put back together and heal.

“Any country that goes through this needs time.”

The irony is he is fighting in a force backed by a foreign power — the US — and led by Kurds determined to stay as separate as possible.

Sefqan, a 29-year old Kurd who commands an SDF unit of more than 200 special forces fighters, has no issues with his country breaking up and the central government losing authority.

“The Baath regime is no good for us Kurds,” he said, referring to Assad’s ruling party. “Our rights were lost in Syria … Our war is to get out from under of this injustice.” Sefqan fought against IS and prior to that other jihadist groups who threatened his hometown, Amuda, in Hassakeh province.

Kurds, who made of 10 percent of Syria’s pre-war population, have long complained of discrimination and oppression by Damascus. Sefqan belongs to an even more disenfranchised community — he’s one of thousands of Kurds who are stateless, because in the past they either failed to convince authorities they were Syrian residents or didn’t take part in censuses in the 1960s and 1970s. Referred to as the “foreigners of Hassakeh,” ″the muted” or “the concealed,” they were long deprived of basic rights like education and health services and were barred even from moving from province to province.

“Any group has a state. Why do we the Kurds not have one? To go to schools. To speak our language. To have an airport and travel. I can’t even go to Damascus,” said Sefqan, who spoke on condition he be identified only by his first name in accordance with SDF rules for its commanders.

Now Sefqan and many of his people enjoy new found confidence and clout, with the Kurdish-led administration controlling northeastern Syria and bolstered by natural resources and good relations with the US-led coalition.

Sefqan and other Kurds dream of emulating the extensive autonomy enjoyed by Iraq’s northern Kurdistan. He said the Kurdish-led administration has made strides in giving real representation to the community and praised its efforts to introduce democracy.

“If they continue this, it will be good,” he said — though with a note of wariness. Rights groups blame the SDF and the administration for arbitrarily detaining critics, forcing military conscription and controlling what are meant to be representative political bodies.

The SDF has emerged as the most organized non-state actor from the war. It and its political arm have successfully established facts on the ground that will likely be hard to reverse — such as teaching the Kurdish language in schools and setting up parallel governing institutions and their own economic infrastructure.

Ali Ahmed al-Hassan, a 29-year-old Arab, works trucking crude oil from one of the richest oil fields controlled by the SDF. It is a profitable, but highly risky business, because remnants of IS have threatened those helping the “Kurdish economy.”

Al-Hassan lived for four years under IS rule after the militants took over his home province of Deir el-Zour. Two of his brothers died, one as a bystander when airstrikes hit an IS position and another when he was caught in a cross fire.

“No one has been spared. My two brothers. My two nephews. And about six cousins. All were killed in the war,” he said.

Deir el-Zour has been freed of IS, but it’s still insecure. He has to be home before dark because of IS sleeper cells lurking in the countryside.

“We need more than a year” to regain security, he said.

IS has left its mark. The locals “have become foreigners. Many of the (foreign militants) married locals. Our children have become Chinese,” he said — his term for the many Central Asian fighters who joined IS in Syria.

Dia believes the militants’ presence is a pretext for foreign powers to meddle in Syria.

“Everyone is responsible for the creation of Daesh,” he said using the Arabic acronym for IS. “It was created and put on a pedestal to ruin this country, like the Arab spring. ”

“All my family has taken part in this war. Five of us. Two were injured — one lost a leg, and another carries a cane — and one was killed. There is only me and another left,” he said. “So long as we have life and our hearts are beating, we will fight to liberate this country.”