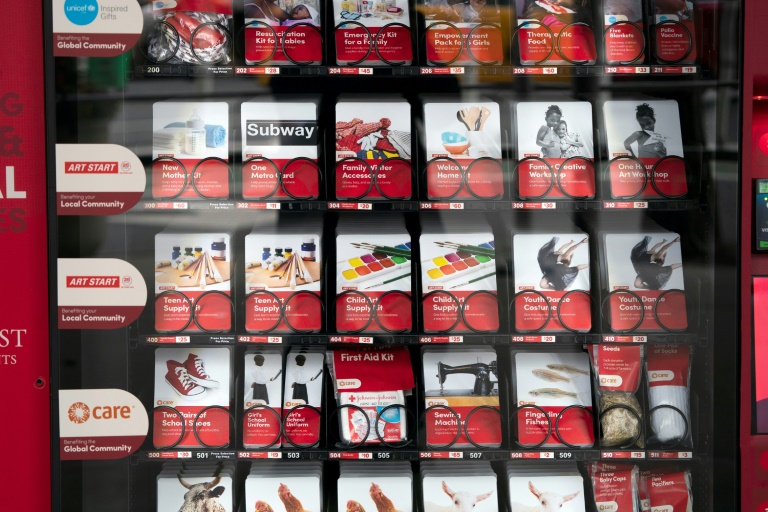 Buy a goat to donate to a poor family…from a vending machine?

It’s now possible in New York, London and Manila, thanks to an action spearheaded by the Mormon Church and charitable organizations like UNICEF.

The idea is simple: instead of snacks, the vending machines sell brightly colored boxes with prices ranging from two to 200 dollars, illustrating the needs of poor families at home and abroad.

Those looking to donate can choose everything from fishing bait (two dollars) to a cow that goes toward feeding a family ($150).

Other items include a polio vaccine, a sewing machine or, for local use, a New York subway map.

Donors choose a box, pay with a credit card and the “gift” falls to the bottom of the machine — a purely symbolic operation, as the boxes are empty and just used to visualize the gift.

But it’s enough to make some passersby pull out their wallets.

“The concept is excellent,” said Julie Brannan, a real estate agent from Manhattan, who stopped on her way to an appointment.

“I chose the empowerment pack for girls because there are places where girls have to miss school during their periods, I have heard about that before and I thought that was a great thing to give.”

‘Ignite the gift of giving’

Brannan said she donates several thousand dollars to charity each year, especially during the holidays.

She plans to stop back at the vending machine to buy something else.

“Honestly you could do every single one in these machines and feel good about it, it was actually hard to decide,” she said.

Steven Sookhoo of Delaware used the vending machine with the same enthusiasm, after hearing about it on social media.

“I thought it was a really cool concept,” said the 40-year-old from Delaware, who works two days a week for a Wall Street finance company.

“I thought about the chickens but I liked the goat — my kids will be excited about that,” Sookhoo said.

“Hopefully it will help somebody in a struggling country and hopefully, a rising tide will raise all the ships.”

That’s the power of these machines, said Ryan John Koch, a New York-based spokesman for The Church of Jesus Christ of Latter Day Saints, better known as the Mormon Church.

“It does ignite the gift of giving in you,” Koch said.

And with prices starting at two dollars, “anybody can give,” he said.

The pilot vending machine installed last year in downtown Salt Lake City, Utah, the home of the Mormons, raised $550,000 during the holiday season, Koch said, with an average donation of $25 per person.

The project was expanded to five cities to include Gilbert, Arizona, New York, London and Manila.

The vending machines will remain in place until December 30, after which all the money raised will be donated to partner organizations, Koch said.

Survivors find reasons to be thankful after deadly California fire

'A Doll for Every Girl': initiative aims to put a smile on Egypt's underprivileged