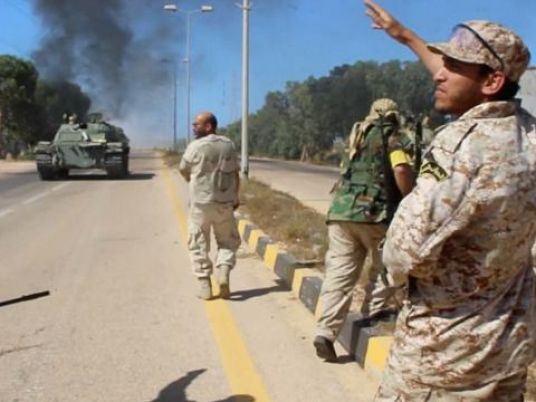 BENGHAZI, Libya (Reuters) – At least four Libyan soldiers were killed on Friday when forces loyal to Khalifa Haftar fought with a local armed group as they sought to expand south, military officials said, with the World Health Organization putting the overall death toll at 14.

Libya has been in turmoil since the NATO-backed toppling of Muammar Gaddafi in 2011, with parallel administrations and armed groups carving the nation into swathes of control.

Friday’s clashes were the first real resistance the Libyan National Army (LNA) faction faced since arriving in the south two weeks ago from its main eastern stronghold of Benghazi.

An official at the WHO said the fighting had killed 14 and wounded 64, mostly from the LNA’s opponents. No more information was immediately available.

LNA officials said clashes began when soldiers left the main southern city of Sabha and arrived in the nearby town of Ghudduwah. It backed troops with air strikes on the “terrorists” and “Chadian mercenaries”, the officials said, using a pejorative for Chadian opposition groups active in south Libya.

As well as the four LNA fatalities, several of its soldiers were wounded, the officials said.

A WHO official said on Twitter the organization had delivered emergency supplies to a local hospital.

The LNA spent the last two weeks securing Sabha, which had been nominally under the control of the internationally-recognized government in Tripoli but was in practice run by local groups including tribes.

The LNA says its campaign is intended to combat Islamic militants and secure oil facilities in the south, which include al-Sharara oilfield, Libya’s biggest. It has been closed since December when tribesmen and state guards seized it.

The LNA, whose commander Haftar dominates eastern Libya, is allied to a parallel government in Benghazi that opposes the Tripoli administration.