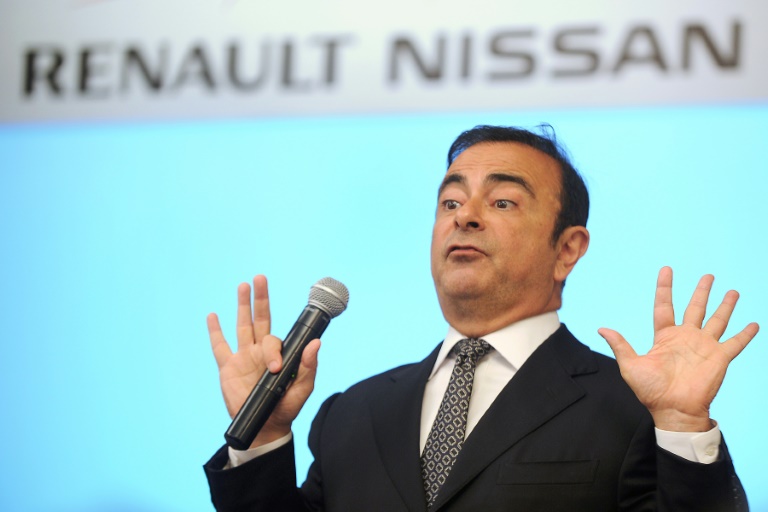 When Carlos Ghosn’s private Gulfstream jet touched down at Tokyo’s Haneda Airport at around 4:35pm on Monday, November 19, the millionaire auto tycoon had an unexpected welcoming committee: an elite unit of prosecutors.

The weak winter sun had set moments before and the brightly lit interior of the plane — call-sign ‘N155AN’ — twinkled through the oval windows as the boarding steps unfurled.

The first sign Ghosn would have had that all was not as normal was when a white van pulled up onto the tarmac and a line of men in dark suits rushed up the steps.

These were top investigators from the Tokyo District Public Prosecutors Office, preparing to interrogate the 64-year-old businessman over allegations he under-reported his income by about half over five years — concealing some $44 million.

As the interviews began, shutters descended over the plane’s windows to offer privacy to the very public figure inside.

This was all captured on a video that appeared on the website of the Asahi Shimbun newspaper, which broke the story in a special digital edition — “Ghosn to be arrested” — sparking pandemonium in newsrooms and trading rooms around the world.

Meanwhile, investigators were springing into action. At around 5:00pm, more than 10 men suddenly appeared at the glass-walled reception desk at Nissan’s plush Yokohama headquarters.

Another team stormed Ghosn’s luxurious apartment high up in a skyscraper in the affluent Tokyo neighborhood of Motoazabu. By 5:30pm, word was out and hoards of camera crews swarmed around the building — home to wealthy ex-pats and celebrities.

The Brazil-born Frenchman himself spent hours inside the plane with prosecutors — initially on a voluntary basis — and was later arrested, a stunning development in a glittering career that made him a rare foreign household name in Japan.

Queues soon began to form outside Nissan’s Yokohama HQ in expectation of a press conference by Chief Executive Hiroto Saikawa that would be watched around the world.

Hundreds of journalists clutching cameras and laptops waited patiently for three hours under a huge Nissan advert — “Innovation is our Finish Line” — before the doors opened and the press crammed into a windowless room as the tension built.

At around 10.00pm, Saikawa delivered an extraordinary news conference dripping with emotion, which lasted around an hour and a half.

A trim bespectacled 65-year-old, his short black hair tinged with grey, Saikawa was known as one of “Ghosn’s children”, a company lifer who owed his career to his mentor.

His voice sometimes catching, he spoke of his “resentment and dismay” at the allegations and lashed out at what he called “the dark side of the Ghosn era”.

Standing alone in front of hundreds of flashing cameras, he pointedly refused to offer the “apology” deep bow usually associated with corporate scandals in Japan and announced a board meeting in three days to oust Ghosn as chairman.

As heavy rain now lashed the Japanese capital, Ghosn was spending his first night in a detention center in northern Tokyo — a far-cry from the jet-setting and glamorous life he usually leads.

Rooms there are typically small and basic, with bars on a single window in the door. Experts say Ghosn is almost certain to be alone in his cell.

Regulations at the concrete 12-floor center state he has a right to 30 minutes of exercise per day and two baths a week.

The wake-up call is shortly before 7.00am and lights out at 9.00pm. Breakfast, lunch and dinner are provided. For an extra charge, inmates can order additional food from pre-approved options.

Ghosn received consular visits from the French ambassador and the Brazilian consul. The latter told AFP he chatted in Portuguese with Ghosn through a screen and found him “in good health”, dressed in detention center uniform.

Meanwhile, near-daily allegations surface in the Japanese media. Ghosn is said to deny them and he has not been formally charged.

Fast forward to Thursday as Nissan board members gather in the conference room near the top of the 22-storey Yokohama HQ to jettison the boss credited with saving the company.

The meeting started just after 4:00pm and crowds of journalists huddled outside were told it would last probably a couple of hours.

In the event, the five Japanese and two Frenchmen joining by video-conference spent more than double that time scouring the allegations.

According to the Asahi Shimbun, Saikawa saw the two French executives — former Renault men Jean-Baptiste Duzan and Bernard Rey — as “very close” to Ghosn and needed more time to explain the scope of the internal investigation which had worked for months in secret to gather evidence.

By the time the briefing was over, “everyone was at a loss for words,” according to the Asahi.

Outside, photographers snapped every black saloon car exiting the building and reporters speculated feverishly on social media that the meeting could be over.

But inside, a rare vote was taking place. Executives were asked to vote on the motion to dismiss Ghosn as chairman by simply saying “agree.”

By 9:30pm, Ghosn’s fate as head of the company he had turned around was sealed. Nissan announced he had been sacked as chairman. Unanimously.