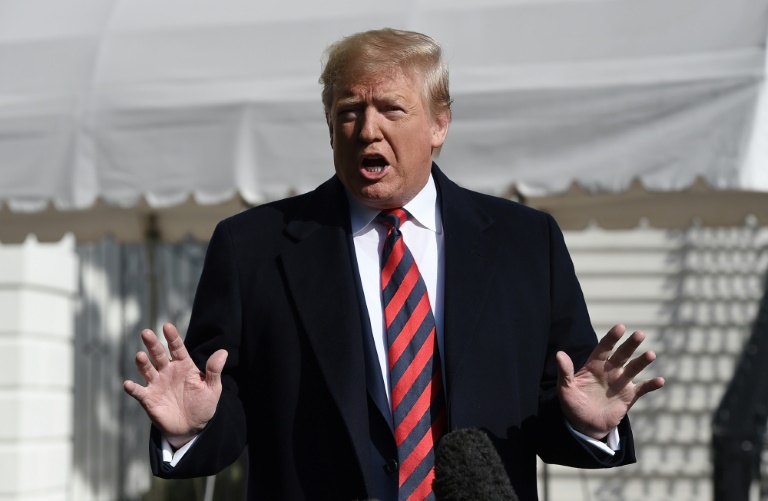 An irate Donald Trump said Friday he welcomes the prospect of an impeachment trial, as the US leader lashed out at “crazy” and “corrupt” opponents probing potential abuse of presidential power.

After a week of dramatic impeachment testimony from current and former administration officials, an embattled Trump took to a favorite broadcaster to air a long, occasionally incoherent list of grievances — against the FBI, his political adversaries, impeachment inquiry leaders, the “deep state,” and more.

“These people are sick,” Trump raged down the telephone line to Fox at the start of a 53-minute tirade that showed how angered and unsettled he has been by an impeachment inquiry that threatens his presidency.

But with many Republicans seemingly unmoved, Trump bashed the testimony as “total nonsense” and said he relished the chance to defend himself.

The House Intelligence Committee has not formally concluded its role in the inquiry, possibly waiting for a court ruling on Monday that could empower members to force senior Trump aides to testify.

But Democrats appear determined to hold an impeachment vote in the House of Representatives by the end of the year, which could see Trump go on trial in the Senate in January.

Removing him from office would require conviction by a two-thirds majority in the Republican-controlled upper chamber.

The increasing prospect of becoming only the third US president formally impeached, after Andrew Johnson and Bill Clinton, has riled the brash New York billionaire, and he fired off multiple attacks against rivals leading the effort.

His main Democratic nemesis in Congress, House Speaker Nancy Pelosi, is “crazy as a bedbug” for pressing a “scam” impeachment, he fumed.

House Intelligence Committee chairman Adam Schiff, who has presided over the public phase of the inquiry? A “nutjob” and a “sick puppy” who should be sued for having “lied” about the president’s “flawless” Ukraine call, Trump added.

Trump was quick to say he “hardly” knows several of the witnesses, including his own ambassador to the European Union Gordon Sondland, who said Trump sought a quid pro quo from Ukraine.

But he rushed to the defense of his personal lawyer Rudy Giuliani, who has emerged in many accounts as having orchestrated the shadow policy to pressure Ukraine.

“Rudy is a great crime fighter,” Trump said, giving an unqualified endorsement to one of the most controversial figures in the Ukraine saga.

“He is a friend of mine. He is a great person, an iconic figure in this country,” he said of the former New York major.

Trump also repeated the conspiracy theory that Ukraine, not Russia, interfered in the 2016 US election — just a day after a former National Security Council expert, Fiona Hill, denounced that in testimony as a “fictional narrative” advanced by Russia to harm the United States.

“They have the server from the DNC — Democratic National Committee,” Trump said of Ukraine, claiming that Democrats gave the computer to “a company owned by a very wealthy Ukrainian.”

The claim appeared to alarm Fox hosts, including Steve Doocy.

“Are you sure they gave it to Ukraine?” a skeptical Doocy asked Trump.

“That’s what the word is, and that’s what I asked actually in my phone call,” Trump responded, referring to his July 25 conversation with Ukrainian counterpart Volodymyr Zelensky at the heart of the impeachment inquiry.

Trump mentioned his political rival Joe Biden to Zelensky and pressed the new president to investigate a Ukrainian firm where Biden’s son worked while his father was vice president.

Democrats argue that Trump’s demand that a foreign leader investigate his potential adversary in the 2020 presidential election is impeachable conduct.

Trump has said he was merely pressing Ukraine to ramp up its anti-corruption efforts. But he also claims the Bidens were involved in corruption.

There is no evidence to back up the assertion, but Trump nonetheless repeated it on Fox, saying “you have to say Joe Biden is corrupt.”

Biden, who leads the Democratic 2020 nomination race, has said Trump has smeared him with corruption allegations because he fears a Biden candidacy.

But Trump seized on polling released this week that shows him winning in hypothetical matchups against Biden and other Democrats in battleground Wisconsin, a state Trump flipped in 2016 but which Democrats aim to retake.

Image: AFP / Olivier Douliery US President Donald Trump is lashing out at his critics including opposition Democrats, as well as diplomats and White House employees who have testified in the impeachment hearing against him

45 years after Nixon, another US president faces impeachment