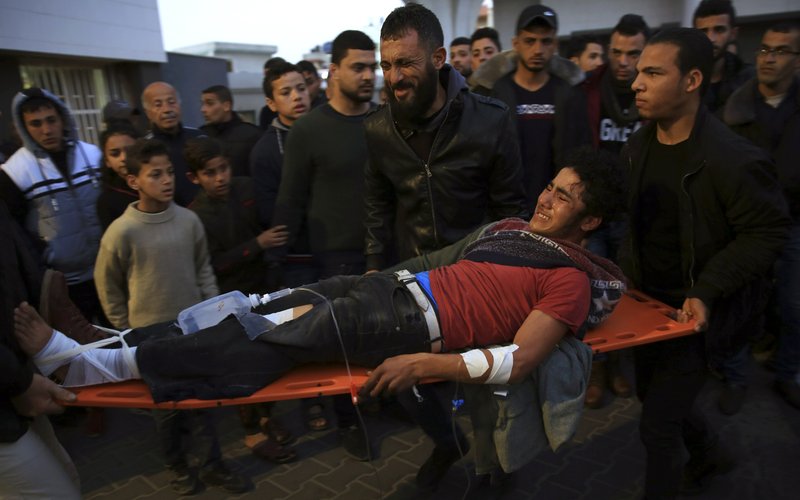 GAZA, Gaza Strip (AP) — Israeli troops shot and killed a Palestinian man in Gaza as thousands took part Friday in a protest along the border, fueled in part by Hamas’ rejection of Qatari cash aid after what the militant group says were Israeli delays in transferring the funds.

In the West Bank, meanwhile, Israeli soldiers shot and killed a Palestinian teen and wounded another as a group of young men hurled stones at the troops.

The infusion of $15 million from Qatar would have been used to pay civil servants in the Hamas-ruled strip but the militant group on Thursday declined to accept the funds. In turn, Qatar said Friday it was redirecting the money to UN humanitarian projects in Gaza.

Hamas also vowed to escalate the weekly demonstrations, which it has organized since last March to highlight the strip’s dire economic conditions, exacerbated by more than a decade of Israeli-Egyptian blockade.

The Hamas-run health ministry said Ehab Abed, 25, was critically shot on Friday in the chest along the fence east of the town of Rafah in southern Gaza Strip and died soon afterward. At least 22 other Palestinians were wounded by gunfire, including 14 minors, at several locations along the fence, it said.

The violence came despite calls by Qatari mediator Mohammed al-Emadi for “a quiet day” along the border.

Israel approved on Thursday the delivery of the third installment of Qatari cash infusion but only after two weeks of postponement, prompting an embarrassed and cash-strapped Hamas to reject the funds.

Qatar had pledged a $90-million package to help Hamas pay long overdue wages for its civils servants for six months. Israel hopes the money would ease the deadly demonstrations.

Over 185 Palestinians have been killed in the marches, including two journalists and three medics, and thousands have been wounded.

Responding to international criticism for using lethal force, Israel says that Hamas, which has ruled Gaza since 2007, is using the protests as a cover to carry out cross-border attacks.

In the West Bank, the official Palestinian news agency Wafa reported that Israeli troops killed a Palestinian teenager near the city of Ramallah.

The Israeli military told The Associated Press that soldiers shot at a group of teenagers throwing rocks toward the troops, killing a 16-year-old boy and wounding another.