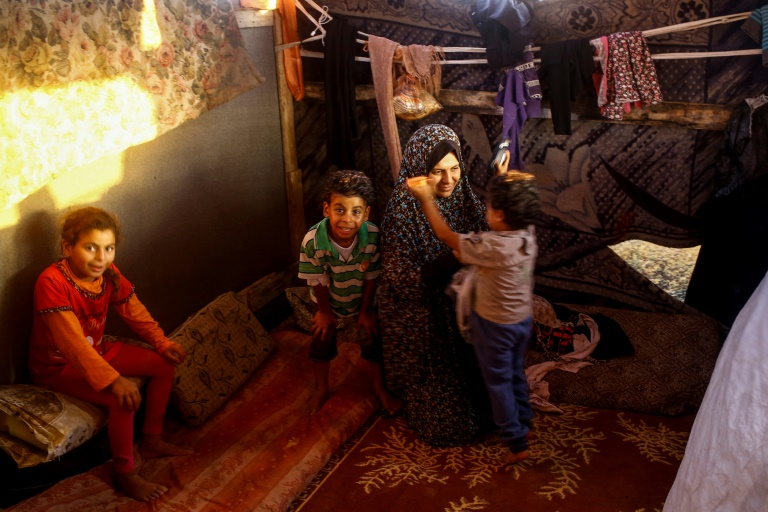 Hani al-Laham sits down to a family dinner after a long day of fasting, but he has little to celebrate as the end of the Muslim holy month of Ramadan approaches.

Despite Laham having a monthly salary of 1,700 shekels ($475), tied to a job in the security services, the Palestinian government has repeatedly failed to pay him.

He is one of nearly 60,000 Palestinians in Gaza on the payroll of the internationally-recognized administration based in the West Bank.

More than a decade ago the Palestinian Authority (PA) ordered its employees in the enclave to stay at home, over a dispute with Gaza rulers Hamas, promising to continue paying their salaries.

But now the money has been cut back.

“This is a disaster, Gaza is collapsing,” said Laham, whose financial woes have seen the family evicted from their rented home in Khan Yunis in the southern Gaza Strip.

They have now moved to a homemade shack on the coast near Gaza City, but even that meagre existence is threatened.

The local municipality is trying to demolish their temporary home, claiming it was built without the necessary permits.

“If they give me back my salary, I will rent an apartment. I am tired of this life,” the 55-year-old told AFP.

Last week Laham finally received a small sum of money, ahead of the Eid al-Fitr Muslim festival marking the end of Ramadan, but it doesn’t cover the family’s basic needs.

The family’s situation — and that of thousands of other Gazans — is one of the idiosyncrasies of the bitter intra-Palestinian conflict.

The Islamist Hamas movement seized control of Gaza in 2007, after a near civil war with the PA which is led by president Mahmud Abbas.

Hamas argued it had won 2006 parliamentary elections and been deprived of the right to rule after the international community refused to accept the result.

The Gaza takeover was deemed a coup by Abbas, who eventually told his employees not to go to work until Hamas ceded power.

The salaries of staff including judges, doctors and ministry workers continued to be paid while they waited for bickering politicians to allow them to return to jobs.

But years later they are stuck, with Israel imposing a blockade on Gaza that has crippled the economy and no realistic employment opportunities under Hamas.

Last year they were reduced by 30 percent, while in March the PA paid nothing at all — without explanation.

The following month Abbas promised the salaries would be paid within a few days, but nothing happened.

Finally 50 percent of one month’s salary was paid on June 5, ahead of Eid which will likely be celebrated Friday.

The Ramallah government has said the lack of payment is a “technical” issue, but it has long had budgetary problems.

Critics also argue that by cutting salaries the PA is seeking to sow discord among Gaza’s two million residents, and make life difficult for Hamas.

Hundreds of Palestinians in the West Bank took to the streets of Ramallah on Sunday and Wednesday to demand that salaries be paid in Gaza, a rare show of opposition in the city where Abbas’s government is based.

The latter protest had been banned by the Palestinian administration and security forces dispersed demonstrators with tear gas and sound grenades.

The United Nations warned last month that Gaza could be on the brink of war, after at least 129 Palestinians were killed by Israeli fire in border protests.

Hamas, which has strongly backed the demonstrations, has fought three wars with Israel since 2008.

Sabara Abu Ali, 67, has kidney failure but can no longer afford the necessary care after her income was stopped.

“I get dialysis three times a week,” at Gaza City’s Shifa Hospital, she said. “I don’t even have the 30 shekels I need for transport each day.”

“How could you desert us Abu Mazen?” she asked, using Abbas’s Arabic nickname.

Yasser, an employee of the health ministry, said even if he were to receive his full salary, his debts are such that once the bank takes its loan repayment and electricity and telephone bills are paid he would have only 75 shekels left.

“I have debts to the supermarket, the greengrocer, the pharmacy, university fees for my daughter and school fees for my youngest,” he said.

Yasser said his financial situation led his wife to desert him, taking the children and returning to her family home.

“Suicide is better than this humiliating life,” he said.