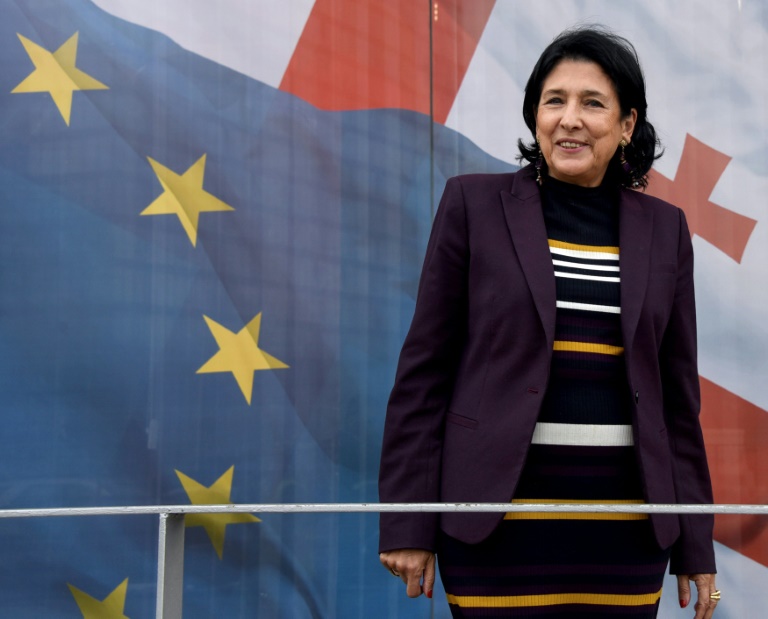 Georgians on Sunday went to the polls to elect a figurehead president in a vote seen as a crucial test for the increasingly unpopular ruling party.

The two have an almost equal chance of being elected, but neither is expected to get the necessary 50 percent plus one vote to win in the first round, according to opinion polls conducted in the run-up to the vote.

Vashadze — backed by exiled ex-president Mikheil Saakashvili’s United National Movement (UNM) and 10 other opposition groups — has been boosted by growing popular discontent over the government’s failure to tackle poverty.

Over a fraught campaign Vashadze has lashed out against what he says is official graft and political meddling in the judiciary.

On the campaign trail, Zurabishvili and Georgian Dream have slammed the UNM for alleged human rights abuses during its previous stretch in power.

Vashadze has also criticized the “informal oligarch rule” of Bidzina Ivanishvili, the billionaire leader of the Georgian Dream party.

Georgia’s richest man, Ivanishvili stepped down as premier in 2013 after just a year in office, but is still widely believed to rule the country of 4.5 million people from behind the scenes.

The presidential campaign saw the ruling party and the opposition cross arms in what is a prelude to their decisive stand-off during parliamentary polls scheduled for 2020, analysts said.

“Over the last several months, the Georgian Dream and the opposition have been rehearsing their pitched battle, which will take place during the legislative elections,” political analyst Tornike Sharashenidze told AFP.

Another analyst, Ghia Nodia, said: “The ruling party knows that its defeat in presidential polls will be the beginning of its end.”

“The camp that wins the presidential vote gets an upper hand in the parliamentary election,” he added.

If elected, Vashadze has promised to mount a campaign demanding snap parliamentary polls.

Zurabishvili, a stylish 66-year-old independent MP, is the daughter of refugees who fled Georgia in 1921 for Paris after the country’s annexation by the Red Army.

Her career in France’s foreign ministry culminated in her posting to Tbilisi.

From that position Saakashvili appointed her foreign minister — after approving the move with then French leader Jacques Chirac.

But she quickly made enemies in the ranks of the parliamentary majority, with MPs and a number of senior diplomats publicly accusing her of arrogance and impulsivity.

She was sacked after a year on the job, though thousands took to the streets of the capital to protest her dismissal.

She then joined the opposition and became one of Saakashvili’s fiercest critics.

Her main rival Vashadze is a respected career diplomat who served in the Soviet foreign ministry where he helped craft the Soviet-US treaty on the reduction and limitation of strategic offensive arms.

Vashadze is married to the world-renowned prima ballerina Nina Ananiashvili, who has been described in the foreign press as one of the greatest ballet dancers of all time.

Both candidates have campaigned on similar promises to bring Georgia closer to full membership of the European Union and NATO.

The tiny Black Sea nation has knocked on NATO’s doors for more than a decade but the bloc has not yet put Tbilisi on a formal membership path, despite a pledge in 2008 that it will at some point be admitted to the club.

The vote is Georgia’s last direct leadership poll as it transitions to a parliamentary form of governance following a controversial constitutional reform.

The inauguration of a new president will pave the way for the new constitution to enter into force, making the head of state a largely ceremonial figure.

Georgia’s next president will be elected in 2024 by a 300-member electoral college.

The constitutional change was adopted in September 2017, a move protested by all opposition parties, which denounced it as favoring the ruling party.

Georgia’s outgoing President, Giorgi Margvelashvili, refused to run for a second term, saying he is not interested in assuming the reduced role.

Over 3.5 million people are eligible to vote in the election, which will be monitored by international observers from the Organisation for Security and Cooperation in Europe.

If the vote goes to a run-off, a second round will be held by December 1.

Polls will close at 1600 GMT, with results expected to start coming in overnight.