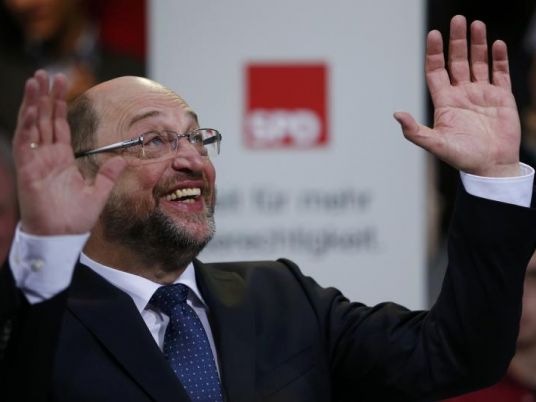 Martin Schulz, the German Social Democrats' candidate for federal elections in September, would beat Chancellor Angela Merkel if balloting was based on a direct leadership vote, a poll showed on Friday.
The poll carried out by Forschungsgruppe Wahlen for broadcaster ZDF showed 49 percent of Germans wanted former European Parliament President Schulz to be their chancellor while 38 percent would prefer Merkel to stay in office.
That marks a turnaround compared with the end of January, when the same poll showed Merkel had 44 percent support compared to Schulz's 40 percent, ZDF said.
Earlier this month another poll also showed Schulz had overtaken Merkel.
The SPD, junior partner in Merkel's ruling coalition, has trailed her conservative bloc for years in opinion polls until the nomination of Schulz sparked a revival in support for the party, which last won an election under Gerhard Schroeder in 2002.
By party, the poll showed the SPD up 6 percentage points at 30 percent – its highest level of the current parliament in that survey.
Merkel's conservatives — comprising her Christian Democrats (CDU) and their Bavarian sister party, the Christian Social Union (CSU) — shed 2 points to 34 percent.
The anti-immigrant Alternative for Germany (AfD) weakened by one percentage point but was in third place on 10 percent. Its fortunes have been boosted by worries about security and the integration of more than 1 million migrants who have arrived in Germany in the last two years.
The AfD was followed by the Greens on 9 percent and the far-left Linke on 7 percent. The pro-business Free Democrats (FDP) were on 6 percent — enough to cross the 5-percent threshold needed to enter parliament.
Some 30 percent would like to see a left-leaning alliance of the SPD, Linke and Greens take power while 44 percent were against such a coalition, the poll showed.
The survey of 1,231 people was conducted between February 14 and February 16.
Reporting by Michelle Martin; editing by John Stonestreet; Reuters