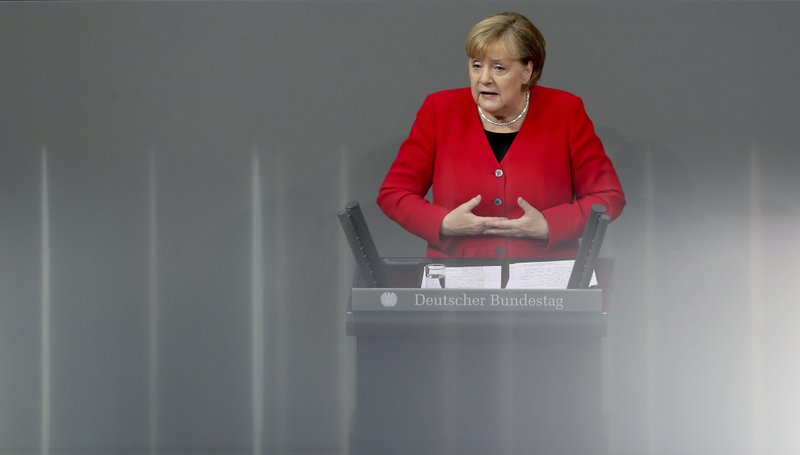 BERLIN (AP) — NATO is at least as essential today as it was during the Cold War, Chancellor Angela Merkel said Wednesday, renewing a pledge to keep raising Germany’s defense spending and arguing that it is important to keep Turkey in the alliance.

Merkel told the German parliament before a NATO summit in London next week that “Europe cannot defend itself alone at the moment; we rely on this trans-Atlantic alliance.”

“The preservation of NATO is in our very own interest today, more strongly than during the Cold War — or at least as strongly as during the Cold War,” she said. Merkel added that it’s “right for us to work for this alliance and take on more responsibility.”

French President Emmanuel Macron’s recent public criticism of NATO — notably a perceived lack of US leadership, concerns about Turkey since it invaded northern Syria without warning its allies, and the need for Europe to take on more security responsibilities — has shaken the alliance.

President Donald Trump has repeatedly criticized alliance members for not spending enough on defense, and in the past has called NATO “obsolete.”

NATO members in 2014 agreed to “aim to move toward” increasing defense spending to two percent of gross domestic product by 2024. The US has been particularly critical of defense spending in Germany, which has Europe’s biggest economy.

Merkel noted that Germany’s spending has risen from 1.18 percent at the time of the 2014 decision to a planned 1.4 percent next year. It aims to reach 1.5 percent by 2024 and Merkel said that “people can rely on” Germany hitting two percent in the early 2030s.

The chancellor acknowledged that “Turkey has become alienated as a member state within NATO” and that “the United States no longer automatically takes responsibility when things are on fire in our neighborhood.”

While there haven’t been any serious suggestions that Turkey should leave NATO, despite a string of differences between Ankara and its partners, Merkel addressed its continued membership head-on.

“I say that Turkey should remain a NATO member and we should support that, because it is of geostrategic significance for NATO that Turkey is in” the alliance, Merkel told lawmakers, while stressing that differences should be addressed.

Image: German Chancellor Angela Merkel delivers a speech during a meeting about the budget 2020 of the German federal parliament, Bundestag, at the Reichstag building in Berlin, Germany, Wednesday, Nov. 27, 2019. (AP Photo/Michael Sohn)

Turkey defies its NATO allies in Syria, as Russia steps in

Trump says he strengthened NATO by insisting on higher contributions