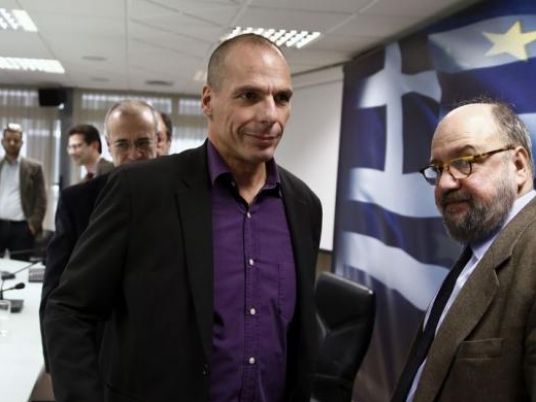 Greek Finance Minister Yanis Varoufakis said on Sunday Greece “intends to meet all obligations to all its creditors, ad infinitum” following a meeting in Washington with International Monetary Fund officials.
He told reporters the government also plans to “reform Greece deeply” and to try to improve the “efficacy of negotiations” with its creditors.
IMF Managing Director Christine Lagarde said in a statement after meeting with Varoufakis that she welcomed his confirmation that Athens would make a loan payment due to the IMF later this week.
The euro zone country is fast running out of cash, but its EU and IMF lenders have frozen bailout aid until the leftist-led government reaches agreement on a package of reforms. Greek Minister of State Alekos Flabouraris told Greece’s Skai TV that Varoufakis would ask the IMF to help pick up the pace of the negotiations, which have been tense and slow-moving.
Most urgently, Greece is on the hook for a roughly 450 million euro loan repayment to the IMF due this Thursday. “I welcomed confirmation by the Minister that payment owing to the Fund would be forthcoming on April 9th,” Lagarde said. She said due diligence efforts in Athens and talks with teams in Brussels over the terms of Greece’s bailout would “resume promptly on Monday.”
Greece has not received bailout funds since August last year and has resorted to measures such as borrowing from state entities via repo transactions to tide it over. After a first set of planned measures failed to impress lenders, Athens sent a more detailed list to institutions representing the creditors – the European Commission, the European Central Bank and the IMF – on Wednesday.
But the list arrived too late to be discussed by euro zone deputy finance ministers – the Euro Working Group that usually prepares meetings of euro zone finance ministers who can decide whether to grant new loans to Greece – at a teleconference on Wednesday afternoon.
EU officials have said that progress had been made in talks but more work was needed for a deal to be reached.
“It is necessary to restore the Greek economy’s funding flow,” Labor Minister Panos Skourletis told the Greek Ependysi newspaper on Saturday, accusing the country’s lenders of taking advantage of Greece’s funding limits to add pressure on Athens.
“Whether the country will meet its external obligations depends on our lenders’ final political choices and stance,” he said, adding that pensions and wages were not at risk.