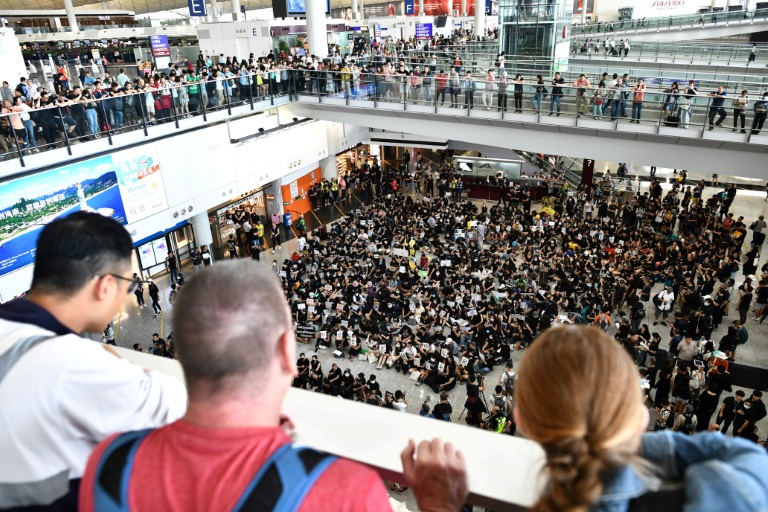 Hundreds of Hong Kong protesters, including flight attendants, held a rally in the airport’s arrival hall on Friday in a bid to “educate” visitors about the unprecedented demonstrations currently roiling the international finance hub.

The cavernous hall is usually filled with excited friends and relatives waiting to greet loved ones as they make their way out of one of the world’s busiest airports.

But on Friday visitors were greeted with protesters chanting anti-government slogans, holding banners and handing out flyers.

The rally is the latest bid to keep pressure on Hong Kong’s pro-Beijing leaders after seven weeks of largely peaceful mass demonstrations followed by violent clashes, an unprecedented challenge to Beijing’s authority since the city’s 1997 handover.

The protests were triggered by a controversial bill which would have allowed extraditions to mainland China, but they have evolved into a call for wider democratic reforms.

Organisers billed the airport rally as an opportunity to brief arrivals on the political unrest, particularly visitors from mainland China where the news is state-controlled and heavily censored.

In China the protests have been portrayed as a violent, foreign-funded plot to destabilise the motherland — a narrative Hong Kong activists want to push back against.

One particularly creative group of protesters were using a television to display a satirical version of an airline safety announcement video that details protester demands and warns of protests in the city.

“Kindly put on your masks and black t-shirts… when attending the assemblies,” the video said, in a reference to the colour widely adopted by anti-government protesters.

Meryl Yeung, a 29-year-old flight attendant, had just got off a flight and joined the protest.

“It’s important to come to the airport and tell foreigners what’s happening in Hong Kong,” she told AFP, saying it was especially vital to make sure people in China are made aware of the protests.

“They have no idea at all, they only get information from one side, they think everyone… coming to a protest, to a rally, are all rioters, or promoting Hong Kong independence,” she said.

Yoko Tsang, 29, said the more she travelled around the world as a flight attendant, the more she has come to cherish Hong Kong’s freedoms, which she feels are increasingly under attack.

“No matter where we go, Hong Kong is always our home and our roots,” she said. “Whether it’s before or after work, we have to fight for time to show our support in rallies.”

Cathay Pacific’s Flight Attendants Union said it supported the rally and encouraged members to join, a stance that earned it a rebuke in China’s state media.

“We feel deep regret with the incapability of our (chief executive) Carrie Lam and her team that only play tricks to fool its people,” the union said in a message on Facebook, referencing the city’s unelected leader.

“We aim to demonstrate (in) a peaceful manner and take the time to tell the people from all over the world… what has been happening lately in Hong Kong,” it added.