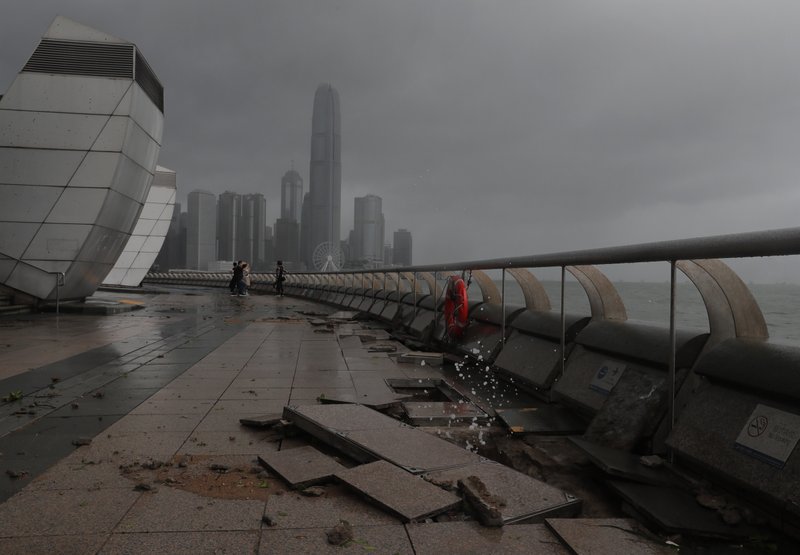 A powerful typhoon barreled into Hong Kong on Wednesday, forcing offices and schools to close and leaving flooded streets, shattered windows and hundreds of canceled flights in its wake.

Typhoon Hato came within 60 kilometers (37 miles) of Hong Kong, close enough to be considered a direct hit under Hong Kong’s storm warning system. It was headed toward the western side of mainland China’s Pearl River Delta.

Weather authorities raised the No. 10 hurricane signal, the highest level, for the first time in five years.

By midday, Hato was packing maximum sustained winds of 126 kilometers (78 miles) per hour, with gusts of up to 207 kph (129 mph) on some outlying islands.

The warning forced businesses, government offices, schools and courts to shut and the stock market to suspend trading, leaving the Asian financial center’s normally bustling streets eerily quiet. Airlines canceled 450 flights and ferry operators halted commuter services and routes to the nearby Chinese gambling center of Macau and cities in the delta.

Hato’s fierce gales brought down trees, overturned trash cans and blew out windows on skyscrapers, raining shattered glass onto the streets below.

The No. 10 signal has only been hoisted 14 other times since 1946, or one for every 72 storms, according to the Hong Kong Observatory. The last time it went up was for Typhoon Vicente in 2012.

The observatory warned residents to be prepared for destructive winds, possible flooding and landslips, and advised people to stay away from low-lying areas because storm surges could cause severe flooding. Streets and village laneways in areas near the sea were submerged by waves crashing ashore, according to local TV news footage.

Hato was skirting south of Hong Kong and was expected to make landfall in China’s Guangdong province. Thousands of people were evacuated from parts of the mainland coast ahead of the storm’s arrival, China’s official Xinhua News Agency reported.

Train services were canceled, fishing boats returned to harbor and more than 4,000 fish farmers and their families came to shore, Xinhua said. Waves up to 10 meters (33 feet) high were expected in the South China Sea, the agency said.

Japan hit by torrential floods, 400,000 forced to leave their homes