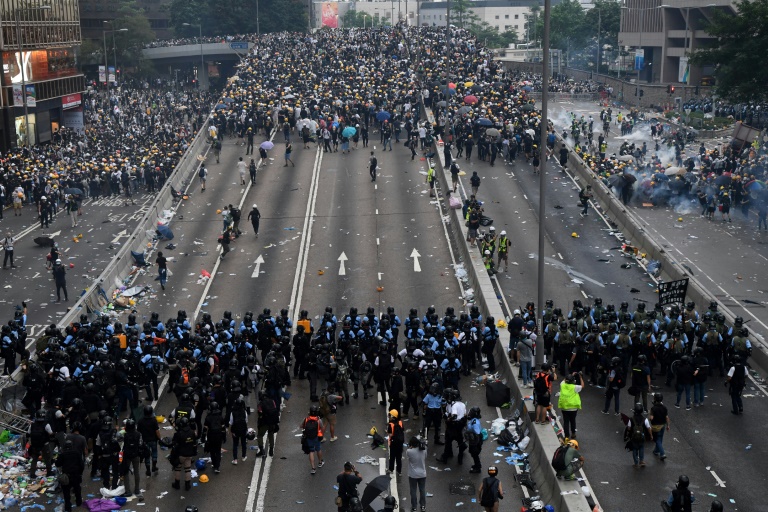 A peculiar legacy of Hong Kong’s colonial past has emerged as a focal point of rage for anti-government protesters: a dwindling band of expat police officers now vilified for doing the bidding of the city’s pro-Beijing leaders.

Hong Kong’s 32,000-strong police force have found themselves fighting unprecedented running battles with protesters for the past five weeks following a huge backlash to a now-suspended plan to allow extraditions to the Chinese mainland.

The crisis — which has since morphed into a wider anti-government movement — has placed officers in the firing line of public anger as the city’s leaders appear unable, or unwilling, to offer any political solution.

But among those singled out for specific retribution include a small group of expatriates who were some of the commanding officers on the frontlines during clashes where tear gas and rubber bullets were fired.

Their personal details were published online after they appeared in the media and were also named by a British lawmaker in parliament.

Wanted posters made by protesters have sprung up across the city targeting two senior officers in particular, as well as their local deputies.

“They have been through an ordeal,” Chief Inspector Neil Taylor, chairman of the Overseas Inspectors’ Association, told AFP.

“But it’s not just them. Their kids have been targeted at school by bullies, a wife was approached in a supermarket and abused. That cannot be pleasant for anybody.”

“Both have said, ‘It’s tough, but we have a job to do’,” added another colleague, who asked not to be named.

“How much of that is bravado, how much they really believe it, I don’t know.”

In the run-up to the 1997 handover to China, there were some 900 mostly-British officers on the force.

Many were encouraged to stay on to help with the transition and were required to be proficient in Cantonese. There are now just some 60 officers left.

The last were recruited in 1994 when the force stopped hiring from overseas. They are expected to reach retirement age around 2028.

Steve Vickers, a former head of the colonial police’s Criminal Intelligence Bureau, left the force in 1993 ahead of the handover and has since set up a risk consultancy business.

He said expat officers remaining after the handover were useful because “continuity and confidence was maintained”.

“To that end, their presence was valuable, and indeed desirable,” he told AFP.

But he added that Hong Kong’s police force has since changed considerably, especially as Beijing asserts more authority over the city’s leaders.

“As the years have gone by, and China’s rise has been much more pronounced, the Hong Kong government became politicized in the years following the handover,” he said.

“This politicization also affects the police.”

Many of the force’s bomb disposal experts are expat officers and won glowing local headlines last year for defusing a series of World War II-era bombs that were unearthed during construction works.

But some of their colleagues now find themselves facing a barrage of criticism.

Protesters and rights groups have accused police of excessive force while angry chants of “black cops” — a pun on a Cantonese phrase used to describe triads — have now become commonplace.

The outed expat officers are now increasingly portrayed as foot soldiers for an authoritarian China that wants to clamp down on Hong Kong’s unique freedoms.

During one protest earlier this month, democracy activist Joshua Wong spotted one and began berating him.

“You are British and you serve the interests of Beijing,” he cried.

Senior officers bristle at the way they have been portrayed — and reject the idea that they have used excessive force.

The senior officers said many had sympathies with those protesting peacefully, adding that police helped facilitate multiple mass rallies and had no say over policy.

“This whole situation has been created by the government through their mishandling of the extradition law,” one officer fumed.

“But I also recognize that there are many wider issues that haven’t been solved,” he said, citing inequality, spiraling property prices and youth disaffection.

“I think we also have to recognize there is also a small, hardcore element who just want to have a go at police and despise China.”

Hong Kong anti-extradition protesters fire up fight in the suburbs

Not the only one: Protest 'Lennon Walls' flower across Hong Kong

Mainlanders among Hong Kong protesters, though many stay away