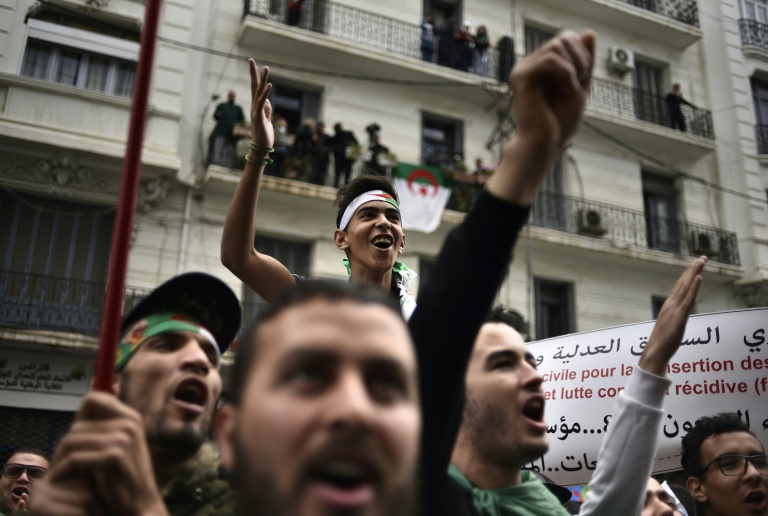 A vast crowd of protesters pushing for reforms flooded the streets of Algiers Friday, while mass rallies were held across Algeria for the first time since ailing president Abdelaziz Bouteflika resigned.

No official figures were immediately available on the size of the rally, but it was at least as big as those held on previous Fridays leading up to Bouteflika’s departure, said AFP journalists at the scene.

Rallies took place in 41 of the country’s 48 provinces, according to the official APS news agency which in a first published slogans highly hostile to those in power.

Opponents of the old regime had called for a massive turnout, targeting a triumvirate they dub the “3B” — Senate speaker Abdelkader Bensalah, head of the constitutional council Tayeb Belaiz and Prime Minister Noureddine Bedoui.

The veteran Bouteflika loyalists have been entrusted with overseeing the political transition after the president finally stepped down at the age of 82.

Bouteflika resigned late on Tuesday after weeks of demonstrations triggered by his bid for a fifth term in office. After two decades in power, he had lost the backing of key supporters including armed forces chief Ahmed Gaid Salah.

Bensalah, speaker of the upper house of parliament for 16 years, is to take the reins as interim president for three months until elections are organised.

Belaiz, a minister for 16 years, was named by Bouteflika as head of the Constitutional Council which will regulate the elections.

Before his appointment as prime minister, Bedoui had served as interior minister — or “chief engineer of electoral fraud” according to the El Watan newspaper

Opponents say all three are tarnished by their long years of service under Bouteflika and should follow his lead and resign.

Meanwhile the country’s intelligence services chief Athmane Tartag has been sacked and his duties handed to the defence ministry, the official APS news agency reported Friday.

Informed sources confirmed the move to AFP that the CSS chief had been removed from office.

Even hours before the rally started, several hundred demonstrators had gathered outside the main post office in central Algiers, which has been the epicentre of the protest movement.

Some shouted “we will not forgive!” in reference to an open letter Bouteflika issued after his resignation, apologizing to the Algerian people for “mistakes made”.

Said Wafi, a bank worker from the nearby city of Boumerdes, had arrived at 5:00 am in the hope of being “the first demonstrator against the system”.

“Bouteflika leaving means nothing if his men continue to run the country,” the 42-year-old said.

One of the leading voices of the protest movement, lawyer Mustapha Bouchachi, has called for the demonstrations to continue “until they have all gone”.

“Our victory is partial,” he said in a video posted online.

“Algerians will not accept that symbols of the regime… lead the interim period and organise the next elections.”

But protestors expressed hope that the system would see real change.

Zoubir Challal, who like many young unemployed Algerians had considered a dangerous Mediterranean crossing to seek a better life in Europe, carried a sign bearing the slogan: “For the first time, I don’t want to leave you, my country.”

The huge rally in Algiers concluded early evening, with protesters dispersing peacefulyl as on previous Fridays.

Demonstrators are calling for new transitional institutions to be set up to implement reforms and organize free elections.

Hamza Meddeb, an independent analyst in Tunisia, said Algeria was entering “a very delicate phase, because the street and the institutions are at risk of diverging”.

The army’s intentions are a key question, according to analysts.

Despite abandoning his patron Bouteflika, who named him army chief in 2004, General Gaid Salah is still seen by protesters as a key defender of the “system”.

But protestors on Friday chanted: “The army and the people are brothers!”

Said Zeroual, 75, said he hoped Algeria would regain “our freedom and our sovereignty”.

“I hope to live long enough to see democracy in my country,” he said.