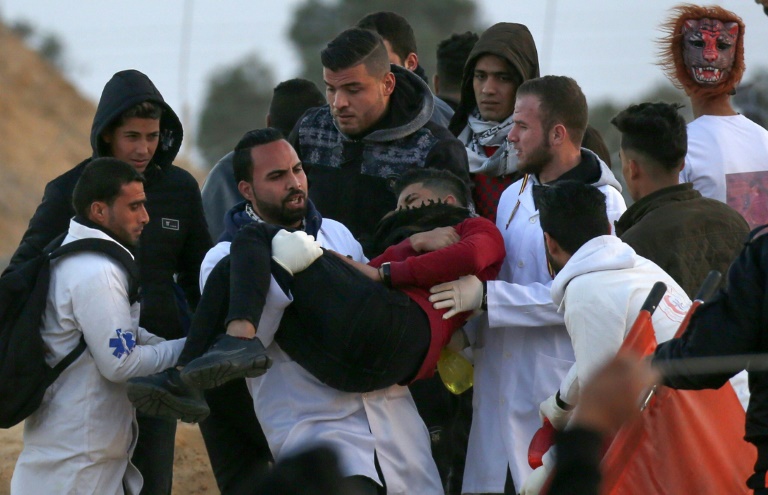 Hundreds of Palestinians took part in protests along the Gaza-Israel border Friday, the last of the Hamas-backed demonstrations until March.

Amid heavy rain and wind, the rallies had the lowest turnout in months, with tensions far lower than in previous weeks and no live fire by the Israeli army, an AFP correspondent said.

The often violent weekly protests began in March 2018, calling for an end to Israel’s blockade of the Gaza Strip and for Palestinians to be allowed to return to their ancestral homes inside the Jewish state.

Israel contends that any return of Palestinian refugees or their descendents would mean an end to its status as a Jewish state and accuses Gaza’s Islamist rulers Hamas of orchestrating the protests as a cover for attacks.

At least 348 Palestinians have been killed in Gaza by Israeli fire since the marches began, the majority during the demonstrations, according to an AFP toll.

A further 7,800 people have been wounded by gunfire, according to the World Health Organization.

Demonstrators have hurled rocks, Molotov cocktails and explosives at the Israel soldiers along the border.

Organisers announced Thursday the protests would halt until March 2020 amid dwindling turnout.

Hamas has over the last year shaped a precarious informal truce with Israel, which has slightly eased its blockade of the enclave in exchange for calm along the border, despite intermittent flare-ups.

As part of the agreements, Israel has allowed Gulf state Qatar to bring millions of dollars worth of fuel and cash into Gaza every month, easing a humanitarian crisis.

Israel and Hamas have fought three wars since 2008.

Image: AFP / SAID KHATIB Amid heavy rain and wind, the rallies had the lowest turnout in months, with tensions far lower than in previous weeks and no live fire by the Israeli army; image from southern Gaza Strip, on December 27, 2019

Organizers say Gaza protests to be scaled back in March