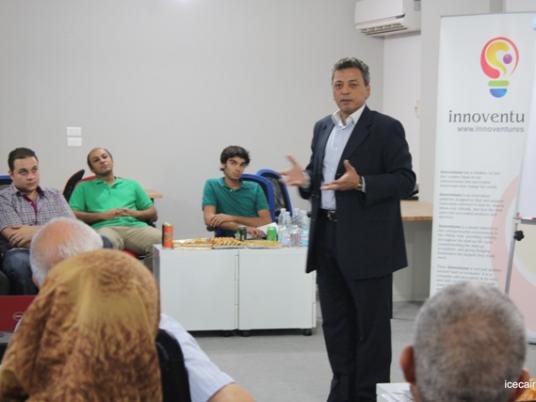 Despite the ongoing political unrest and inclement weather last Friday, people eager to contribute to and shape a greener, cleaner Cairo made their way to Azhar Park to take part in an Ecocities Camp hosted by icecairo and GIZ on 1 and 2 February.

Participants varied in age, background, and experience, but held a shared vision of making Cairo, and Egypt, a more sustainable and better place to live.

“The Ecocities Camp was designed as an 'unconference,'” Claudia Gross, a freelance facilitator and trainer assisting with the Ecocities Camp noted, describing it as a stark contrast to a normal conference. “In an unconference everyone is invited to contribute, there’s no agenda,” Gross said.

One of the main targets of the Ecocities Camp was for people to learn from others‘ experiences what works and what doesn’t. By sharing knowledge, networking and collaborating, participants can take what they learnt and continue building on their ideas and projects outside of the event.

A thought-provoking session on how to raise awareness was led by Catherine El Taweel Kost, of El Misbah El Mudii (Egypt collects). There was mutual consent among many participants that a lack of understanding and a lack of ownership regarding environmental issues, including trash and recycling, make it exceedingly difficult to raise awareness. A total disengagement from responsibility often leaves people with a "not my problem" mentality.

Factor in the prevalent stigmas, negative stereotypes and culturally engrained attitudes surrounding the environment and sustainable initiatives, makes for a challenging task.

El Misbah El Mudii was established in 2005 as a door-to-door free recycling service. Individuals, schools or companies can subscribe to the service, and all non-organic recyclables will be picked up on a regular schedule. The materials collected are then sold to various recycling companies and the funds generated are channeled back into the community to support local low-income families.

To date, El Misbah El Mudii has supported over 500 low-income families and serves an impressive 7,500 addresses, in 75 different locations, throughout Cairo.
The question of how to change people’s attitudes persists. While teaching and educating people are part of the process, “knowledge alone won’t do,” said Kost, “and you cannot impose ideas on people.”

In such circumstances, it is critical to help people relate to issues and engage them through participatory development so that a sense of responsibility is fostered.
Hany al-Khodary, a sustainability advocate, led a session on rooftop gardens in Cairo. According to Khodary, this innovative, small-scale form of urban agriculture is growing quickly in popularity. “There are a lot of people and organizations working on rooftop gardens throughout Egypt,” he said.

One of the first rooftop garden initiatives was launched by the Green Roofs project in 2000, and provided workshops and training to 96 families in Cairo.

Rooftop gardens host a wealth of benefits, from food security to combating air pollution. They also help keep buildings cooler during the long, hot summers and warmer during the winters. Additionally, any surplus food can be sold to provide families with a secondary source of income.

Icecairo members were impressed with the turnout and pleased with the overall success of the event.

“People were discussing 12 topics in the sessions held Friday, and countless discussions occurred informally outside the sessions,” Gross noted, “a lot of meaningful conversations took place.”

“A lot of new networking, friendships and projects were started. Many people knew each other, but there were also many new faces. People were reflecting that the average age of participants is getting lower and that a lot of women are now taking part. This is filling everyone with hope,” Gross remarked.

“Many of the sessions were held in Arabic, which is a good sign. This [Ecocities Camp] is for Egyptians. GIZ and icecairo are just creating the space for this to happen,” Gross concluded, “Egyptians are filling it with their ideas.”

Based on the success and popularity of the event, GIZ and icecairo intend to hold another Ecocities Camp, though the date is not yet set.