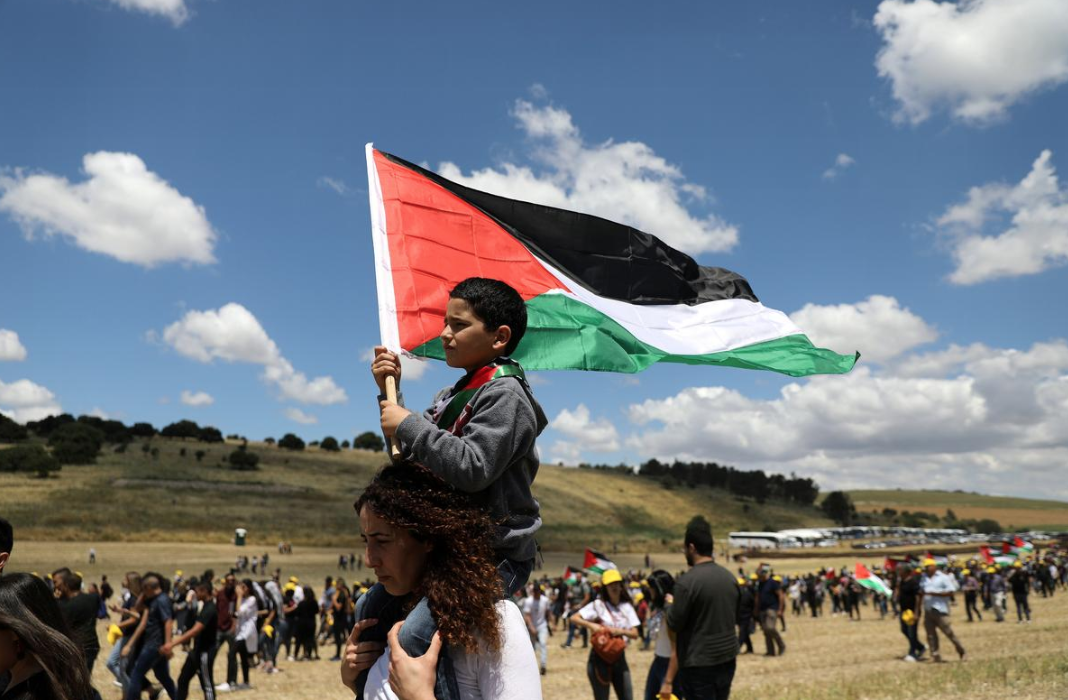 The scene was a rally for members of Israel’s 21 percent Arab minority. The Israeli term for them is Israeli-Arabs, but many now reject that label, identifying instead as “Palestinian with Israeli citizenship,” or simply “Palestinian.”

Each year they hold a gathering to mark the “Nakba” – or “Catastrophe” – when Palestinians lament the loss of their homeland in the 1948-49 war that surrounded the creation of the modern Jewish state.

The event is a celebration of Palestinian identity that, Arab politicians and academics say, reflects a change in thinking over the decades.

On Thursday, coachloads arrived at a roped-off field near the Khubbayza, a ruined Palestinian village that lay 30 km (20 miles) south of Haifa and was destroyed in the fighting between Arab and Jewish forces in 1948.

It and hundreds of others are now marked on paper and digital maps by groups such as “Palestine Remembered”.

The Nakba rally is timed each year to coincide with the day that Israelis in the rest of the country celebrate Independence Day.

On Thursday, Palestinian flags flew in the roped-off field where Israeli authorities gave permission for the gathering. Across a country lane, Israeli banners were draped across the hillside from which Israeli police watched, a drone hovering nearby.

Shouting over the music, Rula Nasr-Mazzawi, 42, a psychologist, said many of the first two generations of Arabs in post-1948 Israel were too scared to discuss matters of identity openly.

“But now we are seeing the younger generation, the third generation, more and more identifying very frankly and very loudly as Palestinians,” she said.

In an interview earlier this year Ahmad Tibi, an Arab member of Israel’s parliament, said: “The term Israeli-Arabs is mistaken, it’s not accurate. We are Palestinians by nationality, and we are Israeli citizens.”

He added: “They are saying Arab-Israeli or Israeli-Arabs in order to say that we are not Palestinians. We bypassed that. We are part of the Palestinian people, and we are struggling in order to be equal citizens.”

Israel’s population recently passed the 9 million mark, according to the country’s Central Bureau of Statistics. This includes 1.89 million Arab citizens – mostly Muslim, Druze and Christians – living alongside the 6.68 million Jews who make up the 74.2 percent majority.

Professor As’ad Ghanem, 53, a Haifa University political scientist and co-author of the book “Palestinians in Israel” drew a distinction with Druze and Bedouin Arabs, many of whom serve in the Israeli military, taken by many as an indicator of integration. In contrast, most Muslims and Christian Arabs do not serve.

He said Israel’s Arabs had undergone a slow transformation from their initial status as marginalized within both Israel, and the Arab world.

A new generation of intellectuals and politicians were “much more strong than those in the 50s and 60s”, and voiced their community’s complaints about discrimination in the job market, and lack of services, he said.

“The majority think that they want to be identified as Palestinian,” he said.

Nonetheless, he said most Israeli Arabs still valued their Israeli citizenship and would oppose attempts to transfer them to Gaza or the West Bank, where the Palestinian Authority exercises limited self-rule, because “they see all the troubles on the other side”.

Recently, Arabs were angered after Israel’s parliament last year passed the nation-state law, which declared that only Jews have the right of self-determination in the country.

Israeli Prime Minister Benjamin Netanyahu reasserted that principle just before his victory in the election a month ago, saying on Instagram: “Israel is not a state of all its citizens. According to the basic nationality law we passed, Israel is the nation-state of the Jewish people – and only it.”

He sought to placate non-Jewish citizens (and critics at home and abroad) by adding “there is no problem with the Arab citizens of Israel. They have equal rights like all of us and the Likud government has invested more in the Arab sector than any other government.”

Some of the Arab minority disagree with the sentiments expressed at Thursday’s rally, saying Israel protects them from threats in the Middle East.

“I am very proud to be an Israeli-Arab,” said Yoseph Haddad, 33, a Greek Catholic speaking in the mixed Jewish and Arab city of Haifa.

“The fact is that if you take a look around all or most of the Arab nations, the Israeli-Arabs here in Israel are in the best conditions.”

But Eyad Barghuty, 39, a novelist and former head of the Arab Cultural Association, said there had been an evolution in identity.

His generation had to struggle to find their roots within a country that emphasized the majority’s narrative, he said, while a younger generation took their Palestinian-ness for granted.

“I saw the ruins of Palestinian villages across the Galilee when I was a young man working on building sites, and I had to go to encyclopedias to look these places up,” he said. “Now there’s an app.”