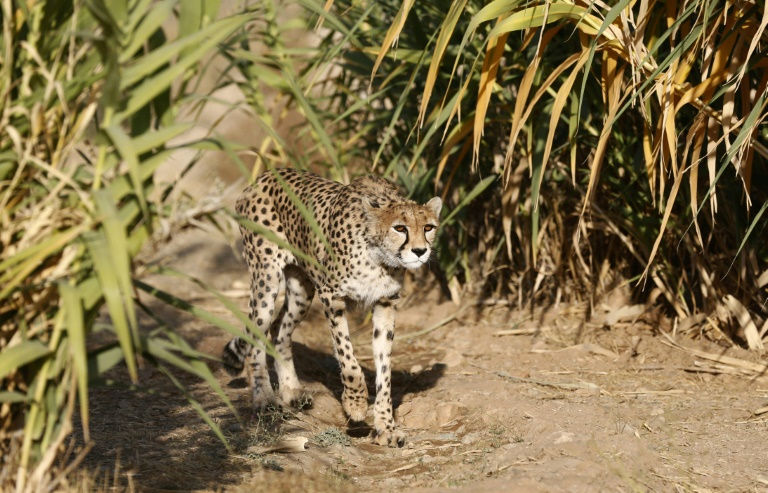 Iranian environmentalists have mobilised to protect the world’s last Asiatic cheetahs, estimated to number just 50 and faced with the threats of becoming roadkill, a shortage of prey and farmers’ dogs.

“The last time our photo traps caught a cheetah here, it was two years ago. But we’re sure they are still in the region,” said Rajab Ali Kargar, deputy head of the National Protection Project for the Asiatic Cheetah.

His camp is just a stone’s throw from an old royal hunting pavilion in the Garmsar area of Semnan province, around 120 kilometres (75 miles) south of Tehran, but these days the focus is on preservation rather than killing.

The world’s fastest land animal, capable of reaching speeds of 120 kilometres (74 miles) per hour, once stalked habitats from the eastern reaches of India to the Atlantic coast of Senegal.

Their numbers have stabilised in parts of southern Africa, but they have practically disappeared from northern Africa and Asia.

The subspecies “Acinonyx jubatus venaticus”, commonly known as the Asiatic cheetah, is critically endangered, according to the International Union for Conservation of Nature, mostly due to past hunting.

Iran launched its protection project in 2001 with the support of the United Nations “when we realised Iran was the last country to have any Asiatic cheetahs”, said Hooman Jokar, who heads the programme.

It set up a network, now numbering 92 specially trained park wardens, who cover a total of six million hectares (14 million acres) in central and northern Iran.

“Every day, we cover hundreds of kilometres to track wild animals in the park,” said warden Reza Shah-Hosseini, as some 20 gazelles galloped past behind him.

There were 20 sightings of the cheetah in Semnan province last year.

“Many think that without this programme the cheetah would have totally disappeared from Iran,” said Jokar.

The Iran-Iraq war of the 1980s was devastating for wild animals, particularly along the country’s western border.

It was thought for a time that the cheetahs had been wiped out, until they were found to have retreated into the central desert regions.

AFP / ATTA KENARECheetahs have been decimaetd in recent decades by a lack of prey, cars and farmers’ dogs

Three major problems have befallen the Asiatic cheetah in recent time: cars, farmers and having nothing to eat.

“When we launched the project, the biggest danger was the lack of prey,” said Jokar.

The team focused on building up numbers of gazelles and rabbits for the cheetahs to eat, which has been largely successful.

Cars and farmers remain a threat, however.

“Today, the cheetahs leave their zones and approach villages. Farmers and their dogs kill them to protect their herds,” said Jokar.

A pack of dogs can overpower a cheetah, he said.

At least 20 cheetahs have been killed in road accidents over the past 16 years.

In its bid to raise public awareness, the project’s most successful move was putting an image of the cheetah on the national football team’s jersey during the 2014 World Cup and the Asian Games in the same year.

“That move had an extraordinary effect in educating and mobilising people,” said Jokar. “Now nearly everyone knows the cheetah is in danger.”

Since early September, a new campaign, headed by popular actress Hedieh Tehrani, has raised some eight billion rials ($200,000, 170,000 euros) in just over a month as part of efforts to relocate farms in order to reduce confrontations with the cheetah.

There are also hopes for a cheetah couple held in captivity in one of Tehran’s biggest parks, Pardisan.

A first pregnancy failed, but the wardens say it is a positive sign that they are mating.

Black rhino to return to Chad after South Africa deal