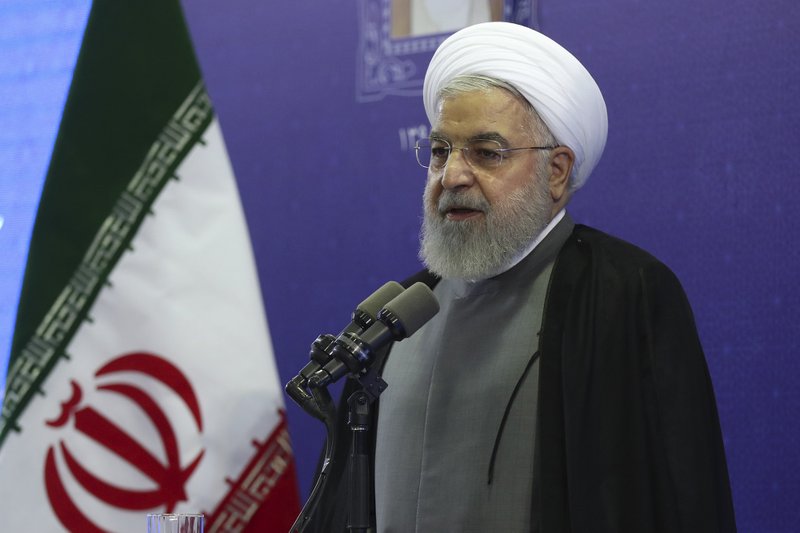 TEHRAN, Iran (AP) — Iran’s president reiterated Tuesday that if Washington wants to open negotiations with Tehran, it must lift all sanctions against his country “before everything else.”

Rouhani also reiterated that America’s sanctions on his country are an act of “economic terrorism,” the report said.

Tensions have escalated since President Donald Trump last year withdrew the U.S. from the 2015 nuclear deal between Iran and world powers and imposed new and harsher sanctions on Iran’s oil and banking sectors.

Iran’s U.N. ambassador, Majid Takht Ravanchi, sent a letter Tuesday to U.N. Secretary-General Antonio Guterres protesting what he called the “illegal” sanctions on Zarif. Ravanchi said they are part of U.S. policy “waging economic terrorism against the Iranian people and bringing pressure to bear on their representatives.”

Iran considers the sanctions “a flagrant infringement of the fundamental principles of diplomatic law” that contravene the privileges and immunities of U.N. diplomats and the Vienna Convention on Diplomatic Relations, he said.

The ambassador said the sanctions signify “the U.S. regime despises diplomacy, which is one of the greatest achievements of humanity to preserve and uphold peace and security among nations” He said the U.S. action “threatens multilateralism as the foundation of international relations and sets a dangerous precedent, paving the way for those who aspire to rather divide, not unite nations.”

“It is imperative for the international community to condemn the United States’ unlawful behavior in the interest of promoting multilateralism … (and) stand firm in defending the established principles of international law,” Ravanchi said.

Photo: In this photo released by the official website of the office of the Iranian Presidency, President Hassan Rouhani speaks in the inauguration ceremony of a power plant in northwestern Iran, Thursday, Aug. 1, 2019. Rouhani said U.S. financial sanctions on Iran’s foreign minister are “childish” and a barrier to diplomacy. (Iranian Presidency Office via AP)

Iran asks U.N. chief to push back against U.S. sanctions on foreign minister

Zarif says Iran will act over 'maritime offences' in Gulf

Iran seizes third foreign ship in less than a month