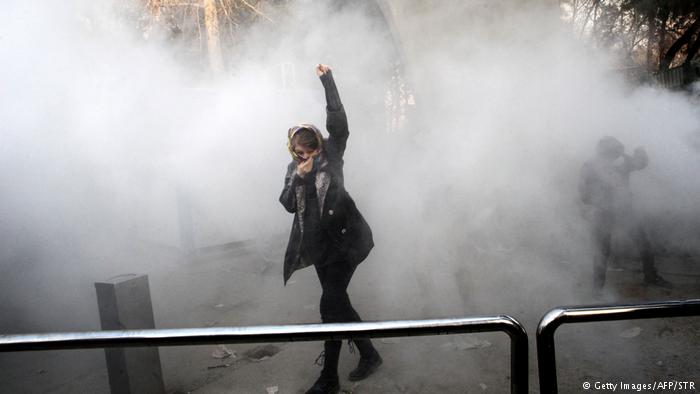 The protests began on December 28 over frustration with the country’s struggling economy, corruption, increasing food prices and also the Iranian government’s involvement in other conflicts in the region like Syria. These demonstrations are the largest display of public unrest since the country’s disputed presidential election in 2009.

The protests started in Mashad, Iran’s second-largest city, before spreading to towns and cities in almost every province. Some 450 protesters have been arrested in Tehran over the past three days.

The country’s Supreme Leader Ayatollah Ali Khamenei responded to the unrest by saying that the enemies of Iran “have allied and used the various means they possess including money, weapons, politics and intelligence services to trouble the Islamic Republic.” Iranian President Hassan Rouhani said that “we accept protesters’ anger over the economy.”

When asked how governments in the region are reacting to the protests in Iran, Dr. Sanam Vakil, an associate fellow at the UK think tank Chatham House, told DW that governments in the region have started out by “ignoring” the coverage of demonstrations but they will have to acknowledge them more and more in the coming days. Although the Syrian government might soon issue a statement in support of the Iranian authorities, she asserted that “Iran very much wants to disassociate these protests from the Arab Spring.”

Iran is a major player in the Middle East. The Iranian government supports the Bashar al-Assad regime in Syria, the Houthi rebel groups in Yemen, the Shia Hezbollah paramilitary organization in Lebanon and the current government in Iraq. Some scholars have called this Iranian involvement in four Arab states the “Shia Crescent,” due to the fact that Iran is the largest Shia Muslim power in the region.

All of the Gulf States with the exception of Qatar support these protests and hope that they stir a crisis of legitimacy for the Iranian government. These countries are competing with Iran for power in the region and are hoping that the protests undermine Iranian influence in the “Shia Crescent.” Saudi Crown Prince Mohammad bin Salman hopes that these protests further destabilize Iran – the country has cut off trade and relations with Saudi Arabia. “These Gulf countries also have to be careful because they are not in a position to really support the demonstrations when they don’t allow them to take place on their own soil,” Vakil added.

Other nations such as Qatar and Turkey do necessarily not support these demonstrations and argue that perhaps they were orchestrated from the outside.  Coverage on Al Jazeera Arabic has also been supportive of the conspiratorial notion that these protests are an “external plot.”

How do the people see it?

Mohammad Mohsen Abu al-Noor, a political researcher in Egypt, told DW that many of the Shia people in who live in Lebanon, Iraq, Syria and Yemen “completely support the Iranian government regardless of the fact that Iranian interests might conflict with the national security interests in their own country.” As for how the non-Shia people in those nations view the demonstrations, Abu al-Noor added that “they hope it will end the tide of Shia and Iranian intervention in the surrounding Arab countries.”

Dr. Ghassan al-Attiyah, the head of the Iraqi Institute for Development and Democracy, told DW that the opinions of those on the street in many Arab countries on issues like the protests in Iran can never really be known with much certainty. This is due to the fact the regimes in many of these countries control the media.

How far will these demonstrations go?

If the Iranian government cracks down on the protests and yet doesn’t solve the issues people are complaining about, will these demonstrations become more and more frequent? “Much of this depends on the government response, crackdown, etc. If the government crackdown is really repressive, we could see a few years of silence,” Vakil responded. Many of the protesters, however, originally supported the Iranian government and she concluded that “this sort of dissent, even if it is quelled, is never really going to go away.”

Protests in Iran: The genie is out of the bottle