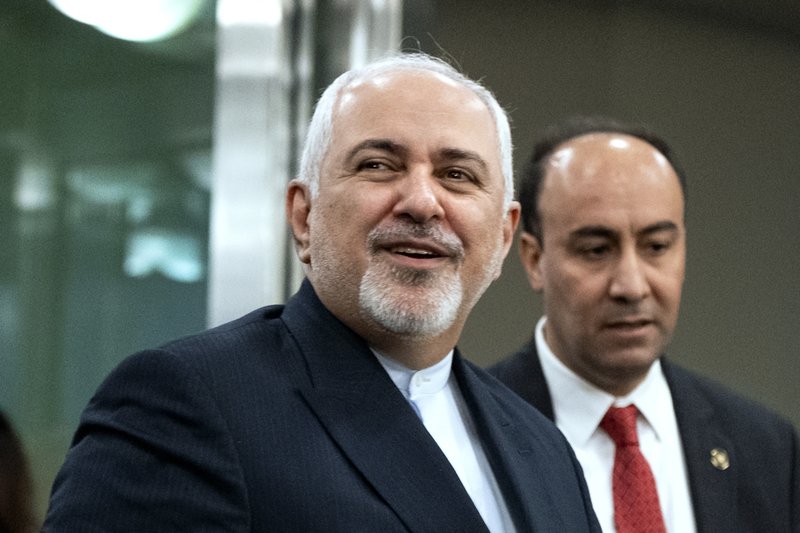 TEHRAN, Iran (AP) — Iran slammed on Saturday the United States for what it called an “inhumane” decision to bar its foreign minister, who was attending the UN summit meetings in New York, from visiting a hospitalized Iranian diplomat in the city.

US authorities were not allowing Iranian Foreign Minister Mohammad Javad Zarif to visit UN ambassador Majid Takht Ravanchi who was undergoing cancer treatment in a New York hospital. In July, the US restricted Zarif’s movement to just six blocks in New York.

The US State Department said it would allow the hospital visit request only if Iran released one of several US citizens it is currently “wrongfully detained.”

The spat comes amid heightened tension between Tehran and Washington following US President Donald Trump’s decision over a year ago to unilaterally pull out of a nuclear deal with Iran. The US has imposed sanctions that have kept Iran from selling its oil abroad and have crippled its economy. Iran has since begun breaking terms of the deal.

The tensions have included seizures of oil tankers at sea. On Friday, Iran released a British-flagged oil tanker it had seized in July as it passed through the Strait of Hormuz, the narrow mouth of the Persian Gulf through which 20 percent of all oil passes.

The ship, the Stena Impero, set sail from Iran Friday morning, arriving at an anchorage outside Dubai’s Port Rashid in the United Arab Emirates just before midnight. It headed into port to dock early Saturday afternoon. The tanker’s Swedish-based ship-owning company Stena Bulk said the crew would disembark in Dubai for medical checks and debriefing, and to spend some time with their families.

The Stena Impero’s seizure came after authorities in Gibraltar, a British overseas territory, seized an Iranian supertanker carrying US$130 million in crude oil on suspicion it was breaking European Union sanctions by taking the oil to Syria. Gibraltar later released the tanker, then called the Grace 1, after it said Iran promised the ship wouldn’t go to Syria.

Britain responded to Iran’s release of the Stena Impero on Friday by accusing Tehran of trying to disrupt freedom of navigation.

UK Foreign Secretary Dominic Raab said the ship “was unlawfully seized by Iran” and that the action was “part of a pattern of attempts to disrupt freedom of navigation. We are working with our international partners to protect shipping and uphold the international rule of law.”

The Persian Gulf tensions have also seen a series of attacks across the Middle East that the US blames on Iran. They reached their height on Sept. 14, with a missile and drone attack on the world’s largest oil processor in Saudi Arabia and an oil field, which caused oil prices to spike by the biggest percentage since the 1991 Gulf War. While Yemen’s Iranian-allied Huthi rebels claimed the assault, Saudi Arabia says it was “unquestionably sponsored by Iran.”

Iran denies being responsible and has warned any retaliatory attack targeting it will result in an “all-out war.”

Image: FILE – In this Sept. 23, 2019, file photo, Iranian Foreign Minister Mohammad Javad Zarif, left, arrives for the 74th session of the United Nations General Assembly, at UN headquarters. Iran on Saturday criticized the United States for what it called an “inhumane” decision to bar its foreign minister who was attending the UN summit meetings in New York from visiting a hospitalized Iranian diplomat in the city. (AP Photo/Craig Ruttle, File)

US emphasizes diplomacy in standoff with Iran