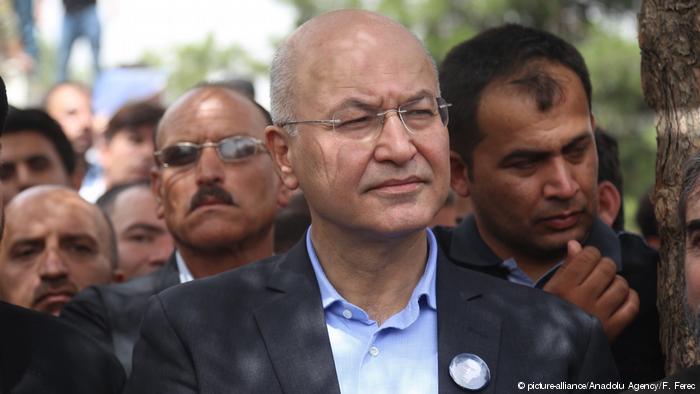 The Iraqi parliament has elected veteran Kurdish politician Barham Salih as president. The vote threw a spotlight on the deep divisions within the Kurdish camp.

Iraq’s parliament on Tuesday elected a new president despite a bitter dispute between the two main Kurdish parties, who for the first time put forward competing candidates.

In Iraq, a Kurd holds the presidency — which is a largely ceremonial role — while the prime minister post is reserved for a Shiite and the speaker of parliament a Sunni.

In Baghdad, parliament voted for Patriotic Union of Kurdistan (PUK) candidate Barham Salih, who previously served as the prime minister of the autonomous Kurdistan region and deputy prime minister of Iraq. Salih is considered a moderate, non-sectarian reformer with good ties with the West and neighboring Iran and Turkey.

Born in Sulaimani in the Kurdish region, the 58-year-old speaks fluent English, Kurdish and Arabic. Known as “Doctor Barham,” he received his masters and Ph.D in engineering in the United Kingdom while living in exile during the regime of former Iraqi dictator Saddam Hussein. In the 1990s, he headed the PUK’s office in the United States.  He is also the founder of the American University of Iraq — Sulaimani.

In a sign of high flying tensions within the Kurdish camp, the vote in Baghdad was postponed from Monday to Tuesday for lack of a quorum and because the PUK and its chief rival, the Kurdistan Democratic Party (KDP), were unable to agree on a joint candidate.

The KDP’s candidate was Fuad Hussein, the chief of staff of former Iraqi Kurdish President Masoud Barzani. If Hussein had been elected, Barzani would have likely acted as the shadow president of Iraq.

Significantly for Iraqi politics, the PUK has traditionally had a good working relationship with Baghdad compared to the KDP.

In the second round vote, Salih secured 219 votes against Hussein’s 22, while 31 votes were invalid or blank.

The struggle for the presidency was significant because it appeared to break a tacit accord between the KDP and PUK, under which former holds the Iraqi Kurdish presidency and the later the Iraqi national presidency. However, the KDP insisted its candidate be put forward because it had more seats in the federal parliament.

The late PUK founder Jalal Talabani served as president for eight years and was succeeded by Fuad Masum, also of the PUK.

The struggle for the Iraqi presidency marked “practically the end of the KDP-PUK’s so-called strategic agreement in which these two parties and families have been dividing every single position in the Kurdistan Region of Iraq and Baghdad,” said Kamal Chomani, a non-resident fellow at the Tahrir Institute for Middle East Policy.

The KDP is dominated by the Barzani family and the PUK by the Talabani family; each party has their own armed wings.

The competition for the presidency comes two days after northern Iraq held long-delayed elections for the Kurdistan regional parliament in Arbil amid allegations of fraud. No official results have been released, but the KDP is traditionally the largest party.

The breakdown of the KDP-PUK power sharing deal is likely to exacerbate tensions between the traditional rivals, who fought a civil war in the 1990s and have engaged in a bitter power struggle in the wake of last year’s Kurdish independence vote.

Kurds overwhelmingly voted for independence, but the vote was non-binding and even led to a loss of territory for the region, rather than independence. Baghdad imposed an economic embargo on the Kurdish region and retook territory including the oil-rich city of Kirkuk from the Kurds in its wake.  In the aftermath, the PUK and KDP accused each other of “treason.”

With the Kurdish power-sharing deal in question, it may lead “the KDP to retaliate through forming a majoritarian Kurdish Region Government cabinet” with rivals to the PUK in an attempt to marginalize it, said Chomani. “If the KDP does that, there might be tensions between the two parties in the Kurdistan region.”

Iraq held elections in May, but still doesn’t have a new government.  In his first act within hours of being named president, Salih tasked Adel Abdul Mahdi prime minister-designate. The Shiite politician now has 30 days to form a cabinet and get parliamentary approval.