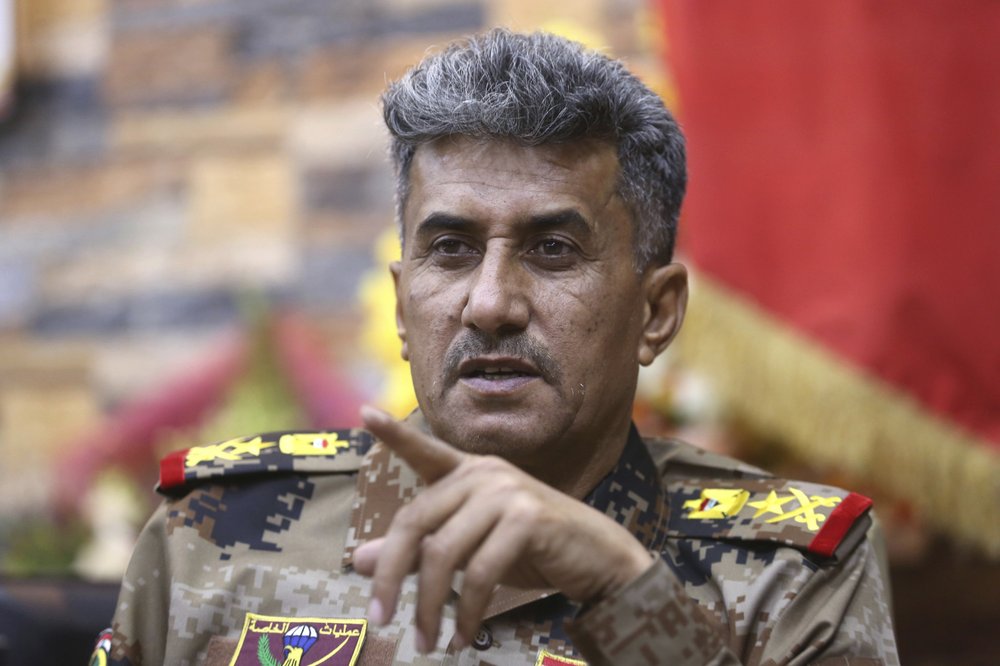 BEIRUT (AP) — The Iraqi prime minister’s removal of a top military commander from his post triggered heated political protests and uncertainty over the weekend, at a time of soaring tensions between the country’s chief security partners in the region, Iran and the United States.

Prime Minister Adel Abdul-Mahdi removed Lt. Gen. Abdul-Wahab al-Saadi from his post as the commander of the country’s elite counterterrorism forces and transferred him to the Defense Ministry on Friday, without providing an explanation.

The decision sparked speculation that some among Iraq’s Iran-backed politicians were uneasy with the commander’s growing popularity among Iraqis. The Arab state finds itself increasingly caught in the middle between the U.S. and Iran, as the two countries lead rival blocs vying for influence in a tumultuous region.

The 56-year-old general, who in recent years led the fight against the Islamic State group working alongside the U.S.-led coalition, said he did not know the reason for the proposed transfer and would prefer to retire rather than be moved to the defense ministry.

“There is no job for me at the Defense Ministry … I prefer to retire,” al-Saadi said by telephone from Iraq.

Al-Saadi told The Associated Press that Abdul-Mahdi informed him in a phone call that he had signed an order to move him to the Defense Ministry. Officials have not provided an explanation for the move.

News of al-Saadi’s decommissioning led most news channels in Iraq over the weekend, and triggered a supportive hashtag from Iraqi fans. Many were angered by what they see as the sidelining of a prominent figure credited with successfully leading several major battles against the Islamic State group, including the nine-month battle to recapture the city of Mosul after which the group was declared defeated in 2017.

Al-Saadi is known to be on good terms with the Americans who have been training and arming the counterterrorism force he commands.

A few hundred Iraqis protested in a district of Baghdad Sunday, with one supporter saying he saw “foreign hands” behind the decision — a reference to Iran.

Former Iraqi Defense Minister Khalid al-Obeidi said the way al-Saadi has been sidelined “raises more than one question mark” and said the winners will be “the terrorists and Daesh outlaw,” a reference to remnants of the Islamic State group. Former Iraqi Prime Minister Haider al-Abadi tweeted: “Is this how the state rewards its fighters who defended the homeland?”

Al-Saadi, an officer since the days of late Iraqi President Saddam Hussein, later was trained by the Americans. The elite counterterrorism force he commands was also armed, trained and equipped by the U.S.-led coalition. He was wounded four times in battles against IS militants.

Iraq’s prime minister has also recently moved to disarm the country’s many Iranian-backed militias, seeking to bring them under the control of the national army.

FILE – In this June 27, 2016, file photo, Lt. General Abdul-Wahab al-Saadi, commander for the Iraqi counterterrorism forces’ operation to re-take Fallujah from Islamic State militants, speaks during an interview with The Associated Press at a military camp outside Fallujah, Iraq. Iraq’s Prime Minister Adel Abdul-Mahdi on Friday, Sept. 27, 2019 removed Lt. Gen. Abdul-Wahab al-Saadi from his post as the commander of the country’s elite counterterrorism forces and transferring him to the Defense Ministry, without providing an explanation. (AP Photo/Hadi Mizban, File)

Iraq’s stability on the line as US, Iran tensions soar

Four killed, including a civilian, across Iraq in day of militant attacks