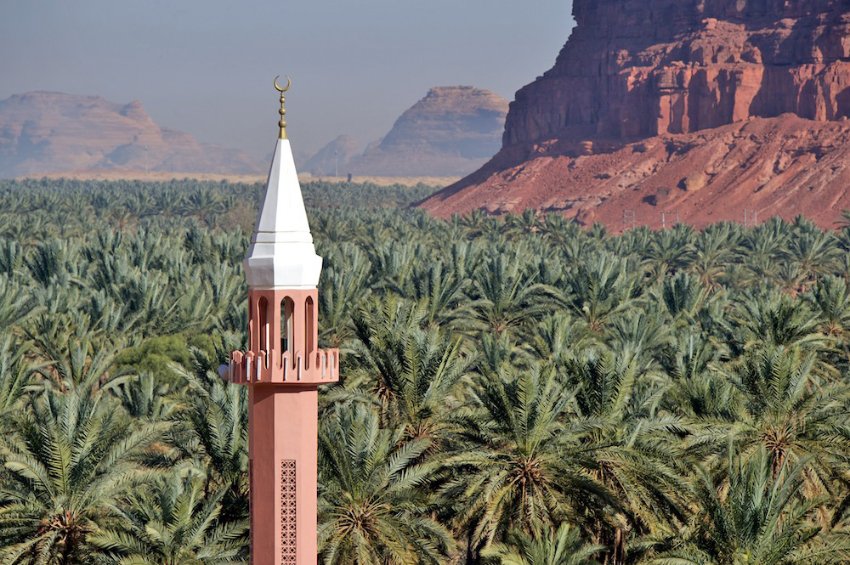 (CNN)  ̶  Leaning out of a helicopter’s open door, 500 feet above the ground, David Kennedy is treated to bird’s eye views of immense sand dunes and lava fields strewn with giant black domes and boulders. Among these natural wonders are mysterious triangular constructions, a beautifully preserved ghost town and elaborate ancient tombs — the archaeological treasures which Saudi Arabia hopes will earn it a place on the heritage tourism map.

This other worldly landscape is Al-Ula county. Covering nearly 9,000 square miles (22,500 sq km), in north-west Saudi Arabia, it is about the same size as New Jersey.

Kennedy is part of an international team carrying out what they say is the Kingdom’s largest ever archaeological survey, which began in March. Unlike its regional neighbors Egypt and Jordan, Saudi Arabia is not well-known for ancient history. But that might be about to change.

Team members say they have already identified thousands of archaeological sites, found evidence suggesting that people have lived in the area for much longer than was previously thought, and encountered bizarre structures, the function and meaning of which are shrouded in mystery.

Amr Al Madani, CEO of the Royal Commission for Al-Ula (RCU), which was established last July to drive the development, hopes the region will welcome its first visitors in four years and that by 2035, once the project is complete, up to 1.5 million tourists will visit annually.

“Al-Ula will be a living heritage, nature and cultural museum — a destination that both surprises and delights,” says Al Madani.

The birth of Saudi tourism?

Until now, almost all international visitors to Saudi Arabia have been either business travelers or religious pilgrims, but the government says it is opening up the country to mainstream tourism as part of economic reforms designed to end its dependency on oil exports, outlined in its Vision 2030 plan.

As well as Al-Ula, the Kingdom is developing a string of resorts along the Red Sea coast, and a Six Flags-branded theme park in Riyadh. However, a tourist visa that had been expected to launch in April has not yet been released — a representative of the Saudi government told CNN that regulations are still being reviewed by the Royal Court.

The potential jewel in Saudi Arabia’s heritage tourism crown is Mada’in Salih. A collection of 111 spectacular tombs carved into rocky outcrops, and one of four UNESCO world heritage sites in the country, Mada’in Salih was built by the Nabataeans, the same civilization that created the much better-known settlement at Petra in Jordan.

Along with other key sights in Al-Ula, Mada’in Salih is currently closed to the public. It will re-open when the RCU has decided how best to showcase its heritage to large numbers of visitors, while ensuring that it is carefully preserved.

Last September, the commission hired Rebecca Foote, a London-based American archaeologist, to establish an archaeology and cultural heritage department. Her first project is the survey: its aim is to identify and document all remains of past human activity, and create an inventory that will help to determine which sites merit further study, conserving and being developed for tourism.

“It’s an extraordinary opportunity,” says Foote. “You rarely get the chance to carry out a best-practice, state-of-the-art integrated survey on such a large scale and in a landscape that’s largely undisturbed.”

Down in the valley

While Kennedy leads the survey of Al-Ula’s “hinterland” another group within Foote’s team is focused on the project’s “core area.” Covering 1,100 square miles (2,890 sq km), it encompasses a valley — also called Al-Ula — hemmed in by sheer-sided mountains that rise 1,000 feet on both sides.

Once rich in water, the Al-Ula valley has channeled people, and trade, along its wide, flat floor for thousands of years.

Early settlements prospered thanks to passing traders transporting frankincense, myrrh and precious stones. Foote says that the first major city here, Dedan — now called Al-Khuraybah — was established during the first millennium BC. “The route from the south to Mesopotamia, Egypt and beyond ran up the western side of the Arabian Peninsula,” says Foote. Well-trodden paths linked oasis to oasis, like a dot-to-dot drawing. “The oases provided water for people and animals,” says Foote, adding that camels — which can survive with only occasional access to water — enabled long-distance trading.

The trade route eventually diminished after seacraft that could safely navigate the treacherous Red Sea were developed.

The valley remained relatively quiet for several hundred years and then boomed again, when Islam was established in the Middle East. “Mecca and Medina became the heartlands of the religion and a destination for pilgrims,” says Foote. “Al-Ula lay on the route south from Syria.”

In recent years, archaeologists have conducted research around the core area at Mada’in Salih, Al-Khuraybah and Al-Ula Old Town, a ghost town labyrinth of stone and mudbrick houses which — according to Foote — was inhabited from at least the 12th century right up until the 1980s.

But the new survey extends to many areas that have never been studied, and involves the use of cutting-edge technology that is revolutionizing the field of archaeology.

Jamie Quartermaine, who is leading the survey in the core-area, is a pioneer in high-tech archaeology. “The scale of the work we’re doing wouldn’t have been possible in the past, using conventional ground survey methods,” he says.

Conference of Arab Culture Ministers returns to Egypt on Sunday

The process begins with a flight in a light aircraft equipped with a scanner and camera. “We take very detailed high-resolution photographs from the air,” says Quartermaine. “The camera captures objects four inches (10 cms) wide from altitudes up to 5,000 feet (1,500 meters).” The scanners use LIDAR (light imaging, detection and ranging) technology to shoot laser beams to the ground and calculate the precise altitude of each survey point.

The photographic and LIDAR data is then combined to produce a 3D relief map. “It’s like GoogleEarth but with a much greater level of detail,” says Quartermaine.

Once he has identified promising sites, Quartermaine zooms in with drones fitted with powerful cameras. Finally, the team goes in by land. “We use 4X4s to visit sites identified from the air to verify, describe, sketch and photograph them,” he says.

Ground research, says Quartermaine, is the only way to see rock art and text found on vertical rock faces that are not visible from above. His team do not have the time or resources to translate the texts, which are written in numerous languages including Aramaic, Arabic, Nabataean, Greek and Latin. Others will do that later.

The rock art, however — some of which pre-dates the written word — is already yielding information. “There are pictures of giraffes, ostriches, one elephant, lots of camels and hunting scenes,” says Quartermaine.

The animals provide clues to the age of the artworks. “The giraffes and ostriches date from the period before 6,000 BC, when those species lived here,” he says. “Climate change records show that after this time, the landscape transitioned from savannah to desert. As the environment dried up, these animals were driven south to their current range in Africa.”

The level of preservation in Al-Ula is “staggering,” says Quartermaine. In the desert, the remains have not been subjected to water erosion and with so many stones lying around, manmade structures haven’t been dismantled for re-use, as often happens elsewhere.

The most commonly found structures in Al-Ula are cairns — piles of stones that mark graves, sometimes surrounded by low circular or square drystone walls — which are older than anyone expected.

“We don’t have verified dates yet, but it looks as if some may date to at least 4,000 BC,” says Foote, adding that some may even stretch back to the Neolithic period (10,000 to 4,500 BC). “It’s very exciting because it shows that the history of occupation of the area goes back much further than was known.”

Kennedy has been equally astonished by his discoveries in the hinterland. “In 10 days of flying, we found around 4,000 sites,” he says. Some graves in this area are unlike any that Kennedy had seen before, with triangular structures positioned to point towards cairns. Kennedy believes they are unique to Al-Ula. “We don’t know the significance of the shapes,” he says.

Most enigmatic of all, though, are the “gates” — stone structures that consist of short, wide walls linked by long parallel walls, which look like farm gates when viewed from above. Some in Al-Ula measure 650 feet (200 meters), the length of four Olympic swimming pools. Even larger ones are found elsewhere in the Kingdom.

“Gates are unique to Saudi Arabia. I’ve never seen anything remotely like them anywhere,” says Kennedy. “There are no entry points, and we don’t know what they were used for,” he says, adding that analysis of aerial photos and ground visits might help to reveal their purpose.

Will tourists come to Saudi?

When tourists arrive in Saudi Arabia, Al-Ula’s standout attractions are likely to be Mada’in Salih, Al-Ula Old Town and Al-Khuraybah.

Saudi Arabia is collaborating with experts from around the world on the Al-Ula development and in April signed a 10-year deal with France that includes provisions for hotels, transport infrastructure and a world-class culture and art museum.

Al-Madani anticipates that 50% of visitors will come from Saudi Arabia and the Gulf region; the other 50% will be from overseas.

But will Saudi Arabia face challenges reconciling international tourism with its conservative Islamic population and values? It has been reported that only women over the age of 25 will be allowed to visit without a male chaperone, and they will be expected to cover their bodies in searing temperatures.

“I think they’ve got a problem selling Saudi Arabia in competition with, say, Jordan, which is a much more relaxed Middle Eastern society,” says Neil Faulkner, an archaeologist and historian who leads tours to Jordan and Egypt.

Gina Morello, from Dallas, Texas, toured Saudi Arabia earlier this year — entering the country on a business visa. She admits to some pre-trip nerves, especially around clothing rules. “When I saw Western women … they just had the abayas (long cloaks) on and no head scarf,” she says, adding that she, too, did not don a headscarf for most of the trip. Wearing an abaya made her feel uncomfortable, however, because of the physical restriction and loss of identity.

“There just weren’t a ton of women walking around,” she says. But people were unexpectedly friendly and warm. “In one park women wanted to take pictures with us … doing selfies and the peace sign.”

Al Madani believes that travelers’ inherent desire to experience new places will outweigh such concerns. “Once here, people will enjoy our hospitality and authenticity, be accepting of the local traditions and customs and respect the norms and values of the communities they are engaging with.”

Faulkner says a second barrier is the perception of the Middle East as dangerous, unstable and potentially hostile to Western visitors. “It has had a huge impact on cultural tourism across the region for the last 15 years,” he says, adding that the tourist industry has declined even in relatively safe destinations. He believes that Saudi Arabia faces an uphill challenge, pointing to their involvement in the war in Yemen and long-running regional conflict with Iran.

“Security is, of course, an important element in anyone’s decision to travel,” says Al Madani, “but there have been very few, if any, incidents affecting travelers or tourists in Saudi in recent years, and we will continue to work hard to ensure this remains so.”

Ultimately, he believes that Al-Ula’s archaeological treasure trove is strong enough to draw crowds to a country that has long captured the world’s imagination.

'Tehran Taboo': Vice and virtue on the streets of Iran's capital