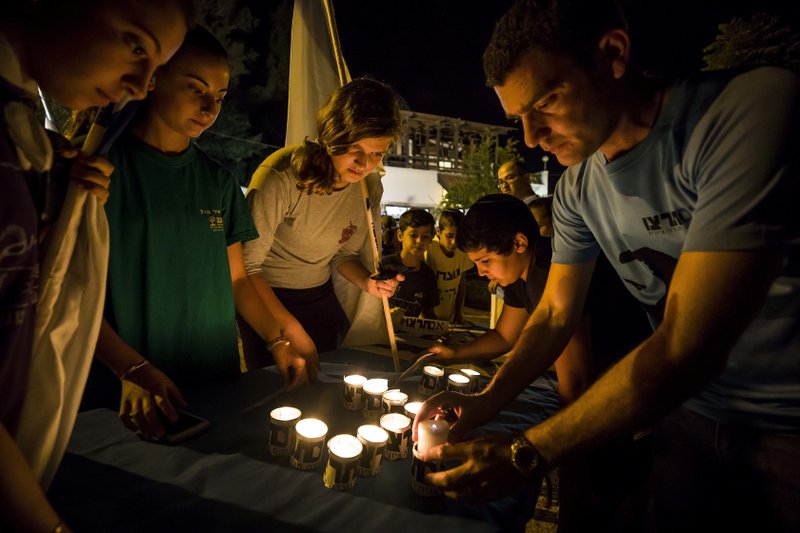 Israel installed new security cameras Sunday at the entrance to a sensitive Jerusalem holy site, as officials began indicating it was considering “alternatives” to the metal detectors at the contested shrine that set off a weekend of violence and raised tensions in the region.

Israel set up the new security measures last week after Arab gunmen opened fire from the shrine, killing two Israeli policemen. It said they were a necessary measure to prevent more attacks and were deployed routinely at holy sites around the world. But Muslims alleged Israel was trying to expand its control at the Muslim-administered site and have launched mass prayer protests.

Three Palestinians were killed in street clashes Friday in some of the worst street violence in years, and later a Palestinian stabbed to death three members of an Israeli family.

“The only thing we want is to ensure no one can enter with weapons again and carry out another attack,” he said. “We’re willing to examine alternatives to the metal detectors as long as the solution of alternative ensures the prevention of the next attack.”

However, the Mufti of Jerusalem, Sheikh Muhammad Hussein, told the Voice of Palestine he demands a complete return to procedures that were in place before the initial attack at the shrine, known to Muslims as the Noble Sanctuary and to Jews as the Temple Mount.

In a statement Sunday, the Islamic institutions in Jerusalem, of which he is a part, said they “affirm the categorical rejection of the electronic gates and all the measures of occupation.”

Disputes over the shrine, revered by Muslims and Jews, have set off major rounds of Israeli-Palestinian confrontations in the past.

On Friday, several thousand Palestinians clashed with Israeli security forces in the West Bank and in Jerusalem after noon prayers — the centerpiece of the Muslim religious week. Three Palestinians were killed and several dozen wounded.

Late on Friday evening, a 20-year-old Palestinian identified as Omar al-Abed jumped over the fence of the Halamish settlement and entered a home, surprising a family that was celebrating the birth of a new grandchild during their traditional Sabbath dinner. He stabbed to death Yosef Salomon, 70, and his adult children, 46-year-old Chaya and 35-year-old Elad. A neighbor, an off-duty soldier, heard the screams, rushed to the home and opened fire, wounding the attacker. TV footage showed the floor tiles drenched in blood, and officials called it a “slaughter.”

Prime Minister Benjamin Netanyahu denounced the attack as “an act of terror, carried out by a beast who was incited with unfathomable hatred.”

Al-Abed said in a pre-attack Facebook post that he expected to be killed in the attack and his father said he was motivated by the violence at the Jerusalem shrine.

The army said soldiers searched the house and measured it in preparation for demolition. Anticipating this, local residents said the family emptied its home of valuables Saturday. Later, clashes erupted as residents burned tires and hurled rocks at Israeli troops who had searched the home. The military says about 50 people attacked troops who fired back with rubber bullets and tear gas. Low-level clashes took place throughout the day

Israel fortified its troops in the West Bank and placed forces on high alert after the attack. The Israeli military said it carried out a wave of overnight arrests of 29 people, including nine members of the Islamic Hamas militant group.

Gaza’s Hamas rulers praised the attack, but stopped short of taking responsibility for it.