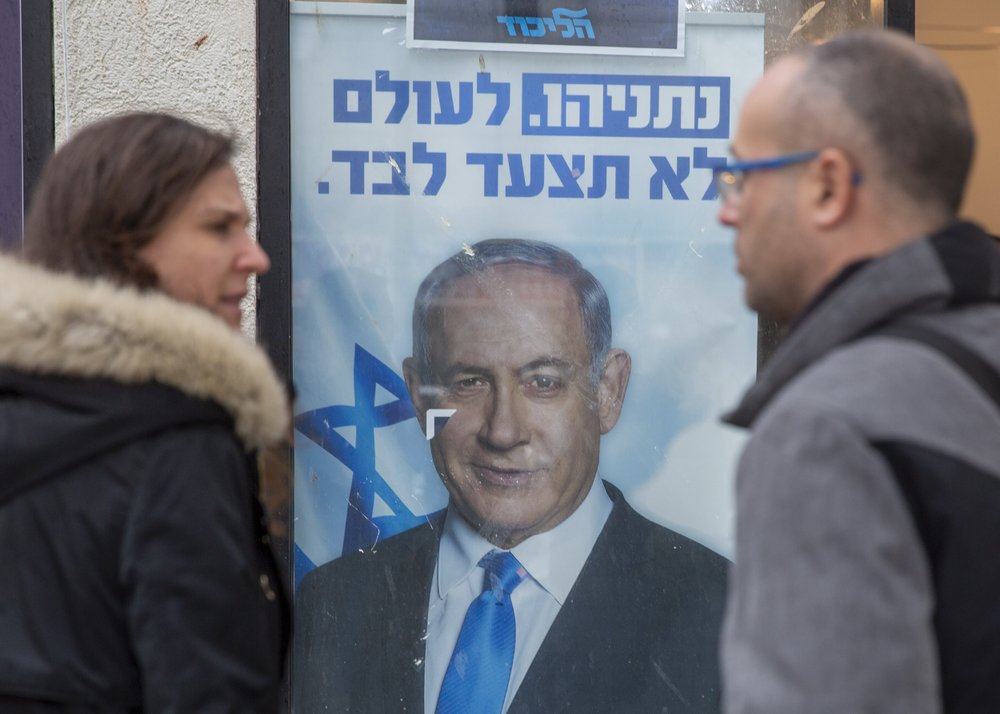 JERUSALEM (AP) — Israeli Prime Minister Benjamin Netanyahu on Thursday scored a landslide victory in a primary race for leadership of the ruling Likud party, giving the embattled leader an important boost ahead of the country’s third election in less than a year.

The strong showing by Israel’s longest-serving leader could give him another opportunity to form a government following the March election, after falling short in two previous attempts this year. By easily fending off Likud lawmaker Gideon Saar, Netanyahu also kept alive his hopes of winning immunity from prosecution after being indicted last month on a series of corruption charges.

“Thanks to the members of Likud for the trust, support and love,” he added. “God willing, I will lead Likud to a big victory in the coming elections.”

In a tweet, Saar congratulated Netanyahu and said he would support the prime minister in the national election. “I am absolutely comfortable with my decision to run,” he added. “Whoever isn’t ready to take a risk for the path he believes in will never win.”

While removing any doubts about Netanyahu’s standing in the ruling party, the primary is likely to prolong Israel’s political uncertainty. Netanyahu will remain at the helm of Likud through the March elections, and his lingering legal troubles could again scuttle efforts to form a government after that.

In September’s election, both Likud and its main rival, the centrist Blue and White party, were unable to secure a parliamentary majority and form a government on their own.

The two parties together captured a solid majority of parliamentary seats, leaving a national unity government as the best way out of the crisis. But Blue and White has refused to sit in a partnership with Netanyahu when he is under indictment.

Opinion polls predict a similar outcome in the March election, raising the possibility of months of continued paralysis. The country already has been run by a caretaker government for the past year.

Netanyahu, who has led the country for the past decade, maintained his position atop the political right by cultivating an image as a veteran statesman with close ties to U.S. President Donald Trump, Russian President Vladimir Putin and other world leaders.

His refusal to make any concessions to the Palestinians was rewarded after Trump took office, as the U.S. began openly siding with Israel on several key issues, validating Netanyahu’s approach in the eyes of many Israelis and adding to his mystique.

Netanyahu’s hard-line approach to Iran has also proved popular. He was a staunch opponent of the 2015 Iran nuclear deal, which has unraveled since Trump withdrew from the agreement. A wave of Israeli strikes on Iran-linked targets in Syria, Lebanon and Iraq has burnished Netanyahu’s claims to having protected Israel from its enemies.

His fortunes have nevertheless waned over the past year, after he was unable to form a government following the unprecedented back-to-back elections in March and September. His party came in second place in September, leading many observers to view the vote as the beginning of the end.

In November, Netanyahu was indicted on charges of fraud, breach of trust and accepting bribes, the culmination of three long-running corruption investigations. Netanyahu vowed to remain in office, dismissing the indictment as an “attempted coup” by hostile media and law enforcement.

Reuven Hazan, a political science professor at the Hebrew University of Jerusalem, said the victory for Netanyahu would have no impact on the general election.

“It simply means that he’s managed to maintain control of the party,” he said. “It just means that the faithful have circled the wagons. It means nothing for the elections except that he looks good. He looks strengthened.”

Netanyahu appeared rejuvenated in recent weeks as he hit the campaign trail, doing several live events a day where he rallied supporters in small gatherings and face-to-face meetings.

“The Likudniks have witnessed an astonishing event play out in the past two weeks, in which a 70-year-old leader who has had his fill of terms in office has thrown himself at every last registered party member,” Israeli columnist Ben Caspit wrote in the Maariv daily.

The approach appears to have paid off and may serve as a template for a more effective general election campaign. In the meantime, Israel will remain in limbo for at least another two months.

Netanyahu, who also served as prime minister in the late 1990s, is desperate to remain in office, where he is best positioned to fight the corruption charges. Israeli law requires public officials to resign if charged with a crime. But the law does not apply to sitting prime ministers.

As long as he remains in office, Netanyahu can use the position as a bully pulpit to criticize his prosecutors. He also can offer political favors in hopes of rallying a majority of lawmakers who favor granting him immunity from prosecution.

“His game is to be prime minister because that is a shield from indictment,” Hazan said.

Despite the victory, Netanyahu has many hurdles ahead.

The Supreme Court is set next week to begin considering whether an indicted member of parliament can be tasked with forming a new government. Its decision could potentially disqualify Netanyahu from leading the next government. It’s not clear when a ruling would be handed down.

The political uncertainty has led the Trump administration to delay the release of its long-anticipated Mideast peace plan.

The Palestinians have already rejected the plan, saying the administration is hopelessly and unfairly biased toward Israel. They point to Trump’s decision to recognize Jerusalem as Israel’s capital, to cut off virtually all aid to the Palestinians and to reverse longstanding opposition to Jewish settlements in east Jerusalem and the West Bank, which Israel captured in the 1967 war.

Meanwhile, Netanyahu has said Israel is on the cusp of securing U.S. support for the annexation of large parts of the occupied West Bank — but only if he remains in power.

That would virtually extinguish the Palestinians’ hopes of one day establishing an independent state, but it would cement Netanyahu’s legacy as perhaps the most successful right-wing leader in the country’s history.