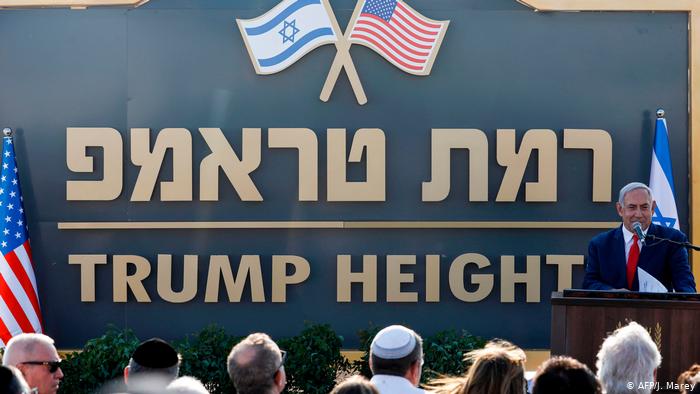 The label is a gesture of appreciation for Washington’s recognition of Israeli sovereignty over the territory which the Jewish-majority state seized from Syria in the 1967 Six-Day war and later annexed without international recognition.

The new settlement will be called Ramat Trump,” Hebrew for “Trump Heights.”

Israel’s cabinet convened in Golan on Sunday for the naming of the neighborhood currently occupied by four settler families.

Addressing the ceremony, Netanyahu called Trump a “great friend” of Israel and described the Golan, which overlooks northern Israel, as an important strategic asset.

“The Golan Heights was and will always be an inseparable part of our country and homeland,” he said. Condemned as a PR stunt

“It’s a non-binding, fake policy,” lawmaker Zvi Hauser was quoted by the Times of Israel as saying. “There is no budgeting, no planning, no location for a settlement, and there is no binding decision to implement the project. But at least they insisted on a name,” he said

Some 23,000 Druze — an Arab Muslim minority also present in Syria and Lebanon — live in the occupied and annexed portion of the Golan Heights, while 25,000 Israeli settlers have arrived there since 1967.

Trump’s recognition of the area as Israeli followed last year’s relocation of the US embassy from Tel Aviv to Jerusalem, which sparked anger in the Muslim world.

Developing Ramat Trump will not be easy. Ringed by high yellow grass and landmines, it is roughly 20 kilometers (12 miles) from the Syrian border and a half hour drive from the nearest Israeli town, Kiryat Shmona, a community of about 20,000 people near the Lebanese border.