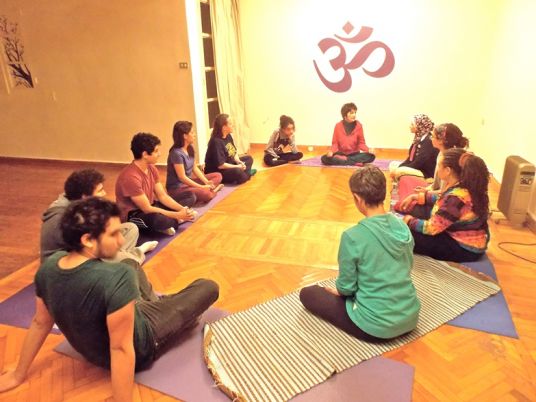 In a quiet, cozy studio in Zamalek, ten people from all different walks of life gathered together for a common purpose: bringing more joy to their life.
Though they were all seated together cross-legged in a big circle, it was easy to recognize who would be teaching the class: Ute Devika Meinel, a woman with a broad smile on her face, warmly welcoming participants and promising everyone to let their laughter ring out without the need for a single joke.
Laughter yoga combines deep yoga breathing, clapping, child-like playfulness, laughter exercises and relaxing yoga.
The session began with a common yoga breathing exercise that soon turned into a faster breathing technique.
“We start with a quick powerful exhale, generated from the lower belly,” Meinel explained. “If you breathe at a rapid pace, you cannot think of anything. The faculty of thinking stops and this is what makes you ready for voluntary laugher.”
But halfway through the class, everyone was wandering freely around the room. They adopted acting and visualizing techniques while genuinely laughing and maintaining eye contact.
When asked about the reason for not coming up with inspirational, funny thoughts during the class, Meinel answered, “The trick here is actually to allow yourself to laugh for no reason. You already know how to laugh. It isn’t something that needs to be learned. You just need to let go and give up cognitive thoughts that usually work as a brake on spontaneous laughter.”
In 2001, Mienel was trained and certified by the founder of laughter yoga and physician Madan Kataria in India. She introduced laughter yoga to Egypt in the beginning of 2012 offering group sessions as well as one-on-one laughter yoga coaching for individuals.
After a few couple of exercises during the session, participants started to look lighthearted as forced laughter turned into real, contagious laughter that came from within.
“It is a stress relief remedy that releases blockages and brings more oxygen to the body and brain, making one feel more energetic and healthy,” Mienel said.
In terms of chemicals in the body, Mienel explained that when endorphins increase in the body, cortisone and adrenaline–both harmful hormones released by the body as a reaction of tension–decrease.
Consequently, if endorphins are not produced enough in the body, the toxic mixture of cortisone and adrenaline makes you feel depressed and low most of the time. In order to get rid of this feeling, Mienel recommends that one should laugh for 15 minutes a day, hearty and loud.
However, Mienel pointed out, "This is rarely possible these days due to the busy, stressful life almost everyone is living, in addition to the difficulty of arousing natural laughter for more than a few seconds which is not sufficient to gain health benefits.”
And this is where the importance of laughter yoga lies.
Based on scientifically proven fact, as Mienel put it, the body cannot differentiate between fake and real laughter.
“If your body feels you making certain physical and facial movements related to laughter, whether fake or spontaneous, the brain releases endorphins into maximum overdrive,” she explained.
Since laughter yoga works on elevating mood, it subsequently lowers high blood pressure and boosts the immune system.
“Most of the sicknesses we get are due to the immunity’s weakness whether out of depression or an environmental contamination,” she said stressing the importance of incorporating laughing in our daily activities to improve health.
Meinel is originally from Germany but has lived in Egypt since 2000. She is a certified coach for personal and professional development.
However, she realized that development projects can only take off when attention is paid to empowering individuals. She considered taking another career path as a laughter yoga teacher and professional life coach to increase people’s well-being.
“My dream is to see laughter yoga spread in Egypt because this will help bring Egyptians back to their own nature, which is to be very cheerful, optimistic and a feeling of safety,” Meinel said.
Laughter yoga is the brainchild of Kataria who began his laughter exercises with only five people in Mumbai in 1995. It has since spread to more than 70 countries around the world.
A laughter yoga session normally lasts for one hour and adherants claim that a person can feel the psychological difference right from the first session.
Laughter yoga classes are held at On the Mat Studio, located at 5 Al-Morsaleen St, Zamalek, every Monday at 8:30pm.