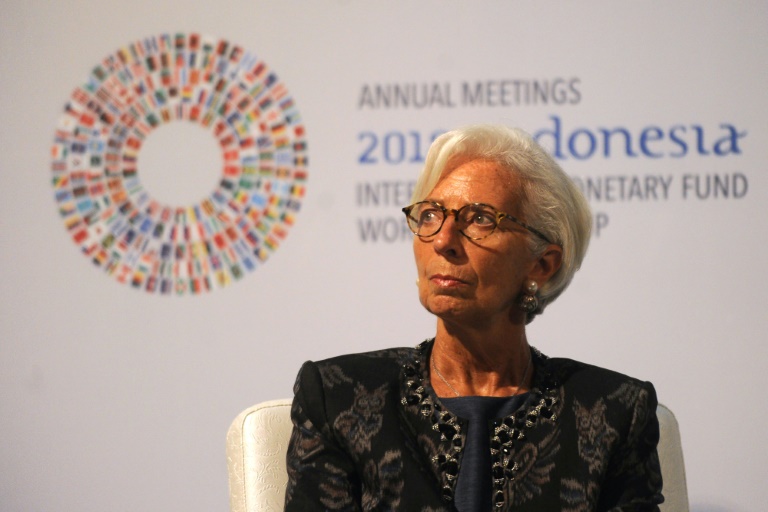 World leaders need to fix global trading systems instead of trying to tear them down, International Monetary Fund chief Christine Lagarde said Wednesday, in a rebuke to nationalist politicians pushing tariffs and protectionism.

Her comments come as a trade spat between China and the United States threatens economic growth around the world, with IMF experts warning of “new vulnerabilities” in the global system.

“We need to work together to de-escalate and resolve the current trade disputes,” Lagarde said at an IMF and World Bank gathering in Bali.

“We need to join hands to fix the current trade system, not destroy it,” she added.

Around 32,000 members of the global financial elite are on the Indonesian holiday island for a week of discussions that have been clouded by US President Donald Trump’s America First trade policy.

Trump has levied or threatened tariffs on goods from economies around the world, notably China, but also on traditional allies such as the European Union.

A raising of US interest rates has also helped send emerging market currencies into a tail spin, as countries that borrowed heavily in dollars race to pay back their debt.

“New vulnerabilities have emerged and the resilience of the global financial system has yet to be tested,” it said in the twice-yearly Global Financial Stability Report.

Market participants “appear complacent” about the potential risks from a “sudden, sharp tightening of conditions” — like rising interest rates or declining access to capital.

More tariffs and their countermeasures “could lead to a broader tightening of financial conditions, with negative implications for the global economy and financial stability,” the fund warned.

Lagarde told her audience Wednesday that she did not feel overly gloomy about global conditions.

“It’s tempting to be a bit depressed about this perspective but I’m actually hopeful because there is a clear appetite to improve and expand trade,” she said.

Prominent US academic Jeffrey Sachs was less diplomatic in his assessment of Trump’s shepherding of American trade relationships, slamming the president’s repeated claims that deficits with China and other nations meant Americans were being taken advantage of.

“Trade deficits don’t (necessarily) mean cheating by the other side… This is the United States trying stop China’s growth — it’s a terrible idea,” Sachs, director of the Center for Sustainable Development at Columbia University, told a seminar in Bali.

“All the accusations against China are completely trumped up… Grossly exaggerated.”

As interest rates rise in advanced economies, prompting investors to take their money in search of higher returns, the IMF said emerging economies should take steps to insulate themselves from an exodus of funds.

That would include boosting foreign currency reserves that could be used in a crisis, as well as working with local bond markets to build a local investor base, rather than relying on financing from abroad.

The fund also pointed to risks from high corporate debt and too much government borrowing, a hangover from fiscal stimulus measures and government rescue spending in the wake of the 2008 global financial crisis.

Since the last stability report in April, global economic conditions have become less balanced, with a more pronounced divergence between advanced and emerging economies.

Despite the Federal Reserve’s interest rate increases, financial conditions “have eased further” in the US as equity valuations have stayed lofty.

Conditions in Europe and other major advanced economies have also remained “relatively easy,” although investors have pushed back their expectations for the European Central Bank to lift interest rates, the report said.

In China, the situation remains “broadly stable,” although corporate debt is above historical levels and household borrowing is at the high end among emerging countries.

“China is well aware and is taking steps to slow down the debt buildup,” said Vitor Gaspar, director of the IMF’s Fiscal Affairs Department.