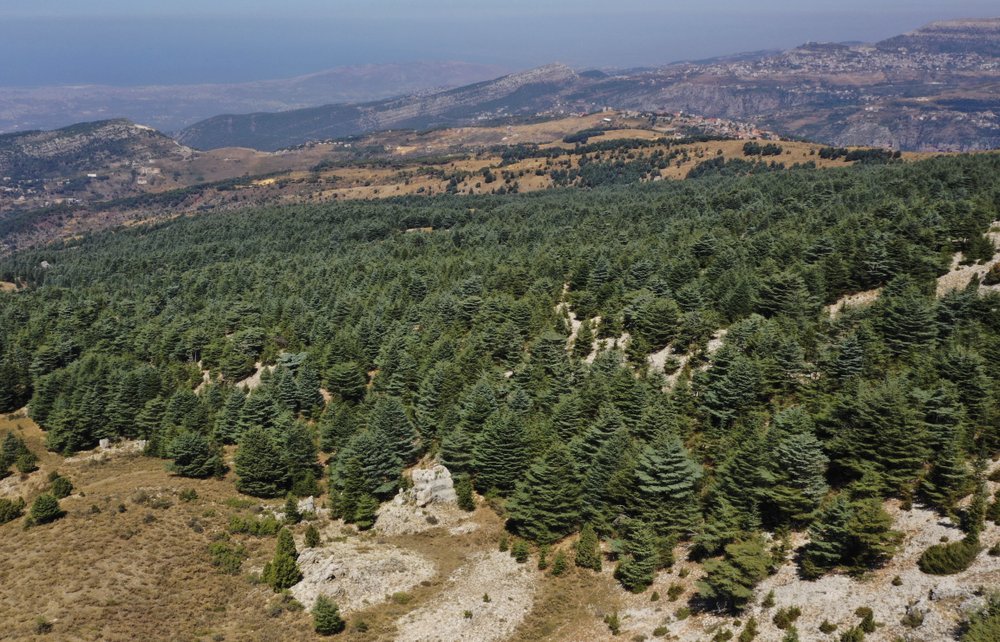 HADATH EL-JEBBEH, Lebanon (AP) — Kneeling beneath Lebanon’s ancient cedars, Waheeb Humayed peers through a protective visor and waves a metal detector until he hears the tell-tale beep. He clips the grass, pushes a small prodder into the ground and gently sweeps the dirt away with a garden trowel, revealing another deadly mine.

Three decades after the civil war ended, deminers are still working to clear this mountainous northern region, famous for its centuries-old cedar trees, which are Lebanon’s national emblem. Humanity and Inclusion, an international demining organization, says it has removed hundreds of mines and other explosives since 2011.

“I feel very happy every time I discover a mine,” Humayed said after he safely removed the anti-personnel mine. “I just feel that I helped save the life of a human being or an animal.”

Lebanon’s lush cedar forests are a source of pride for this small Mediterranean country. The ancient tree, often dubbed “Cedars of God,” is emblazoned on the national flag, and forests across the north are prime tourist attractions.

Hadath El-Jebbeh, a village in the northern Becharre region, is home to one of the largest cedar forests in the country. But it sees few visitors because of mines left over from the 1975-1990 civil war, when the area was on the front lines between the Syrian army and the Lebanese Forces, a Christian militia.

As the deminers took a break under the cedar trees, a shepherd shouted from a distance that he saw something suspicious. The deminers told him to stay away from it, saying they would check it out in the coming days.

Despite the dangers, local shepherds still bring flocks of sheep and goats to graze nearby. Hikers have also wandered into the area, not knowing about the hidden mines. It might be sheer luck that there have been no reports of fatalities in the area in recent years.

Lebanon is littered with mines left over from decades of conflict. Israel left thousands of mines behind when it withdrew from southern Lebanon in 2000 after an 18-year occupation. Israeli forces dropped cluster bombs, many of which failed to detonate, during the 2006 war with Hezbollah. Islamic militants used mines and explosives in northeastern Lebanon, near the Syrian border, in 2017.

“Most of the minefields here are unorganized and we don’t have maps that give us the exact numbers of mines,” said Al Bechelany, who heads the Lebanon Mine Action Center, part of the Lebanese army. Some 100,000 mines were left behind from the civil war, with another 360,000 deposited along the border with Israel, he said.

Mines have killed 918 people and wounded 2,886 in Lebanon since 1975, according to Al Bechelany. He said Lebanon had hoped to clear all the mines by 2020 but now expects the work to continue for another decade because of a lack of funding. It could take even longer if the country, which is grappling with an economic crisis, does not get an expected influx of $340 million for demining efforts.

Funding comes mostly from the United States, the European Union, Japan and local Lebanese institutions, according to David Ligneau, mine action program manager at Humanity and Inclusion. He called on everyone to step up funding and for all states, including Lebanon, to join treaties banning the use of mines.

On a single day, Associated Press reporters watched a team dispose of 10 mines in the forests of Hadath el-Jebbeh.

Explosive experts wired small detonators to each mine and called out that they would blow them up within five minutes. The countdown ended with a huge explosion, sending a mushroom cloud of dust into the air.

Lebanon still has a long way to go, particularly in the south, where mines and cluster bombs still kill and maim. Last month, cluster bombs left over from the 2006 war killed a man and a boy. The presence of mines prevents local communities from making use of large swaths of land, affecting everything from farming to tourism.

Standing beneath the giant cedars, Ligneau said he hoped his group’s efforts would grant the Lebanese people “free access to this beautiful forest.”

Hezbollah: What good would a German ban do?