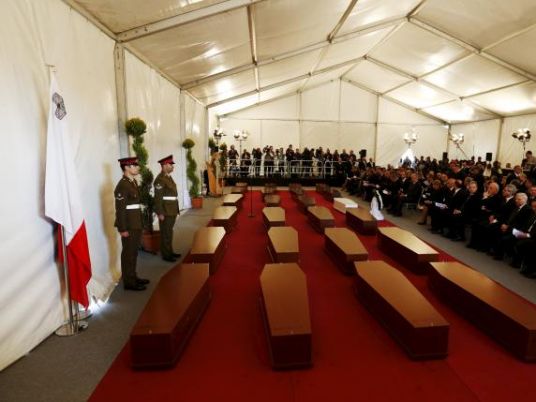 The group controlling Libya's coastal capital Tripoli said it would "confront" any unilateral European Union moves to attack sites used by people-traffickers, urging the bloc to consult it over plans to deal with a migration crisis.
Muhammed el-Ghirani, foreign minister of the group that is a rival to Libya's internationally-recognized government, said it had repeatedly offered to help deal with migrants leaving its shores, but its proposals had been rebuffed.
His comments, made in an interview with the Times of Malta published on Thursday, underlined the challenges facing EU ministers meeting in Brussels to find ways to stem the numbers risking their lives traveling from Libya, a country mired in political chaos.
At a summit hastily convened after nearly 2,000 migrants at sea, EU ministers are expected to discuss one proposal to launch military and civilian missions to capture and destroy the traffickers' boats, diplomats said.
"You cannot just decide to hit. Let's say you strike a particular site. How will you know that you did not hit an innocent person, a fisherman? Does Europe have pinpoint accuracy? So we are saying, 'Let's do this together,'" Ghirani told the Maltese newspaper.
"We have been doing our best to get Europe to cooperate with us to deal with illegal immigration but they keep telling us we're not the internationally recognized government. Now they cannot just decide to take this action. They have to speak to us," he added.
He said any unilateral attacks would be confronted, the newspaper reported, without going into further details.
Two rival governments, each backed by loose coalitions of ex-rebels who once fought together to oust Libyan strongman Muammar Gaddafi more than three years ago, are battling for control of the North African OPEC producer.
World powers only recognize premier Abdullah al-Thinni who has been based with his cabinet in the east since losing control of the capital last summer.
Public outrage peaked this week after up to 900 migrants, many fleeing poverty and political turmoil, died last Sunday when their boat sank on its way to Europe from Libya.
Security forces loyal to the Tripoli administration detained 45 Bangladeshis waiting for smugglers to pick them up, a security official told Reuters.