Countries across the world will tighten security ahead of major cultural and sports events after a suicide bombing in Britain that killed at least 22 people, but experts say reinforced measures will do little to prevent determined individuals.

Given the target being a Manchester pop concert, the latest attack to hit Europe had echoes of the coordinated attacks in November 2015 by Islamist militants on the Bataclan concert hall and France’s national soccer stadium that killed 130 people.

Since those attacks, France has been in a state of emergency and seen thousands of soldiers patrolling its streets alongside police to protect tourist sites, government buildings and events.

That has not stopped a raft of attacks in the country, such as the truck attack in Nice on Bastille Day last July, by “lone-wolf” assailants who did not use a network of fellow militants — all lessening the risk of alerting security agencies.

“Whatever is done – and in this case it’s British intelligence which is considered among the best in the world – it won’t prevent such incidents happening,” said Jean-Charles Brisard, president of the Centre for the Analysis of Terrorism.

“You can bring back the perimeter, add security gates and as many controls as you want, but that will not change the fact that a determined individual will carry out his act if he is not caught before.”

After a meeting with security and intelligence chiefs, Prime Minister Theresa May said police believed they knew the identity of the bomber. The attack was claimed by Islamic State.

London’s mayor said there would be more police on the streets of the capital after the attack at the end of a concert by US singer Ariana Grande in Manchester, 320 km north of London. 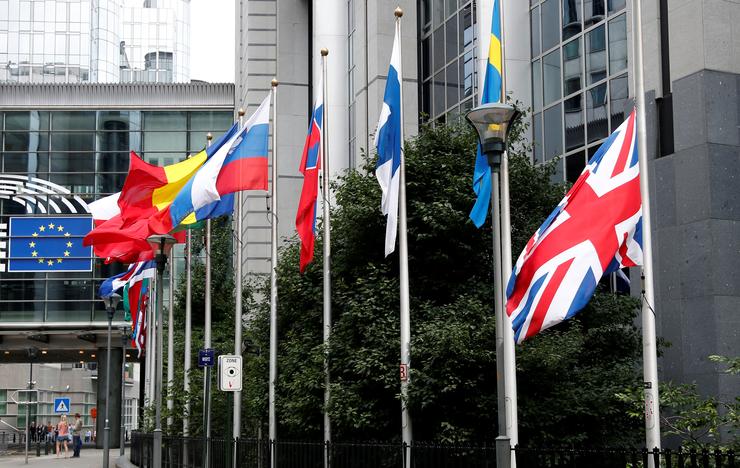 A Union Jack flag is lowered at half-mast in honor of the victims of the Manchester attack, outside the European Parliament in Brussels, Belgium May 23, 2017

Officials in several other countries on Tuesday also sought to reassure their citizens following Monday’s attack.

The US Department of Homeland Security warned that the US public may experience increased security at public events.

Hong Kong’s AsiaWorld Expo, where Grande is due to hold a concert in September, said it would improve security at all concerts and events. Besides baggage inspection, there would also be metal detectors and search dogs, it said in a statement.

SM investments Corp, whose Mall of Asia Arena in the Philippine capital will host Grande in August, said it would take all precautions. “Our security is always stepped up especially for big crowds like this,” said SM investment relations chief Corazon Guidote.

Sports events organizers were also looking into security. European soccer body UEFA said there was “no specific intelligence” to suggest that Wednesday’s Europa League final in Stockholm between Manchester United and Dutch side Ajax Amsterdam might be the target of any attack. 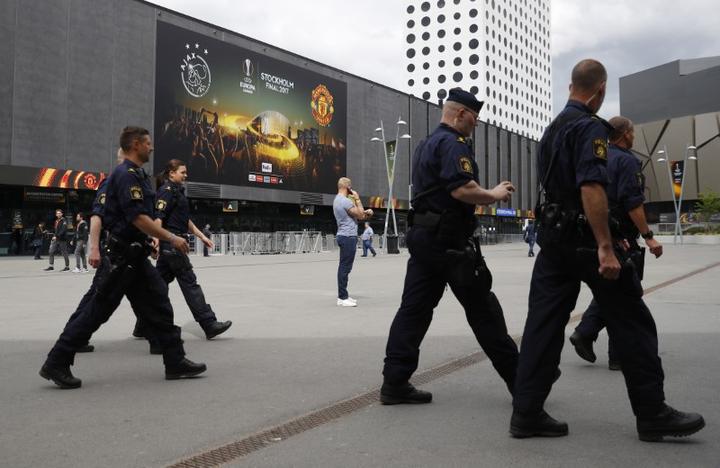 Police officers outside the stadium ahead of the Europa League final in Friends Arena, Stockholm, Sweden

The International Cricket Council said security for the ICC Champions Trophy next month in Britain was its “highest priority”.

France’s Interior Ministry said on Tuesday it would send a list of measures to police to reinforce security, although officials said there was nothing especially new being proposed.

“There are plenty of measures already in place including by increasing private security contributions, but everyone has to simply remain vigilant,” said Sebastien Pietrasanta, a French Socialist lawmaker and terrorism expert.

“I think we have to accept that we’ll be fighting terrorism for a generation.”

Speaking on RTL radio, Thierry Teodori, who runs a large concert hall in the southern French city of Lyon that was due to host a Grande concert in June, echoed those comments.

He said venues in France had already substantially beefed up ways of controlling crowds, searches and monitoring queues as well as increasing manpower.

“With every tragedy there is a new scenario. We have to train personnel to be as effective as possible and anticipate all eventualities, but that’s inside the perimeter,” he said.

“Outside the perimeter, it’s up to security forces and the state to ensure security because we don’t have the legitimacy to do that.”

In Singapore, the organizer of Britney Spears’ concerts in June said they were considering new measures.

“All our events are licensed by the police. It is normally advised by the licensing department on what precautions to take, how many armed guards we need. So we work closely with them,” said Yogesh Mehta, project manager at IME Entertainment Group.

Singapore, which hosts a security summit between June 2-4 bringing together Asia-Pacific defense and military chiefs, made amendments to the Public Order Act last month.

It requires event organizers to notify the police a month beforehand if they expect more than 5,000 people to attend. And police may refuse to allow a public gathering if it has a direct political end or involves foreigners.

However, as well as a financial cost, enhancing security to such levels in Western countries may prove unpopular given they could curb on people’s existing way of life, experts said.

“It’s a problem of means, but also a political choice,” said Brisard. “You have to continue living your life despite the attacks and not enter into the terrorists’ game.

“They want you to change your system so that our society is entirely dependent on a security plan,” he said.