In Beyonce's first performance since announcing her pregnancy with twins, she shined head to toe in golden hues. Meanwhile Adele got a rare do-over on national television when she flubbed her performance, and Beyonce's daughter Blue Ivy stole the show with her adorable mini-Prince outfit. Here's more on the top moments at Sunday night's Grammy Awards:
Mother Beyonce

Beyonce accepts the award she won forBest Urban Contemporary Album for 'Lemonade' and Best Music Video for 'Formation' at the 59th Annual Grammy Awards in Los Angeles, California, February 12, 2017
In a highly anticipated performance, the first since she announced she was pregnant with twins, Beyonce celebrated her femininity and motherhood. Clad head to toe in gold with bands around her neck, a crown and veil, she invoked images of both a goddess and the Virgin Mary and often cradled her swelling belly with her hands.
Although she skipped the elaborate choreography often seen in her shows, the performance was visually arresting with ghostly images of women and children dancing around her. Introduced by her mother, Tina Knowles, Beyonce looked down lovingly at her husband Jay Z and daughter Blue Ivy seated in the front row of Staples Center. 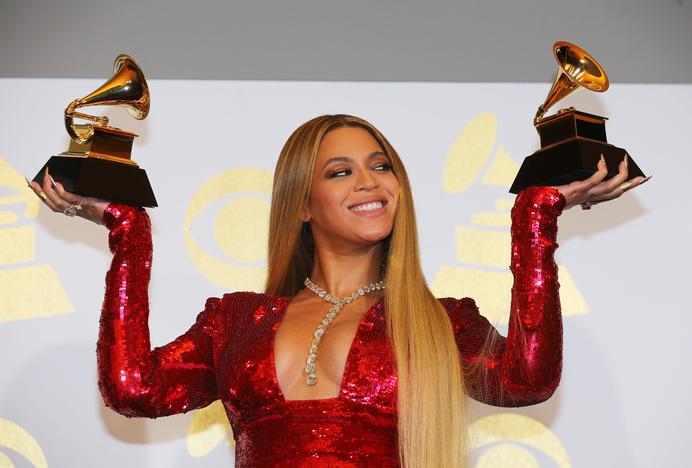 Yet in the end, she lost out to Adele, the musical sales leader in 2016, in the top awards of the night, but took home two Grammys for best music video and best urban contemporary album for "Lemonade."
Adele, Take Two 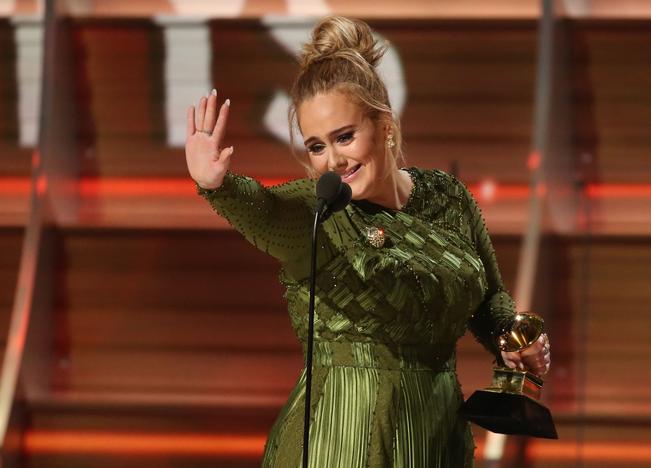 Adele waves to singer Beyonce who is in the audience as she and co-song writer Greg Kurstin (not pictured) accept the Grammy for Song of the Year for 'Hello' at the 59th Annual Grammy Awards in Los Angeles, California, U.S. , February 12, 2017 (Lucy Nicholson / Reuters).
What everyone loves about Adele, despite her great vocal skills, is that she's still nervous and makes mistakes on big stages. Last year at the Grammys, her performance was marred by a technical problem, but this time, she flubbed one of her performances and asked for a do-over.
After a flawless opening performance of her super hit "Hello," the British singer came out a second time to honor the late George Michael. But early into her somber, orchestral performance of "Fastlove," she stopped singing, cursed and asked the band to start over, a rare occurrence on a live awards show. She explained, "I can't mess this up for him."
Carpool Grammies
Late night TV host James Corden has made his career lip-synching with musicians in his car, so he brought a prop car into the Staples Center with him. 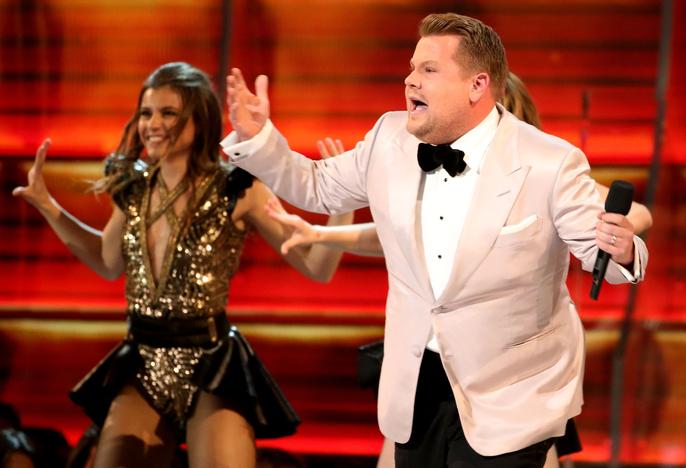 Show host James Corden performs at the 59th Annual Grammy Awards in Los Angeles, California, February 12, 2017 (Lucy Nicholson / Reuters).
Earlier, Corden inserted some Steve Martin-esque antics by falling through the stairs in his entrance and rapping his intro with one shoe, namedropping President Donald Trump as well as several musicians up for awards. Corden seemed adept at improvisation, even coming out in his boxers in response to Twenty One Pilots stripping down to their undies.
Later on, Corden brought out a cardboard car and gathered a group of musicians from the front rows to sing with Neil Diamond to "Sweet Caroline." Among Jennifer Lopez, Jason Derulo, Tim McGraw, Faith Hill, Keith Urban and John Legend, few of the artists seemed to remember the lyrics to the song. But the skit was saved by Blue Ivy who jumped in the scene at the end. 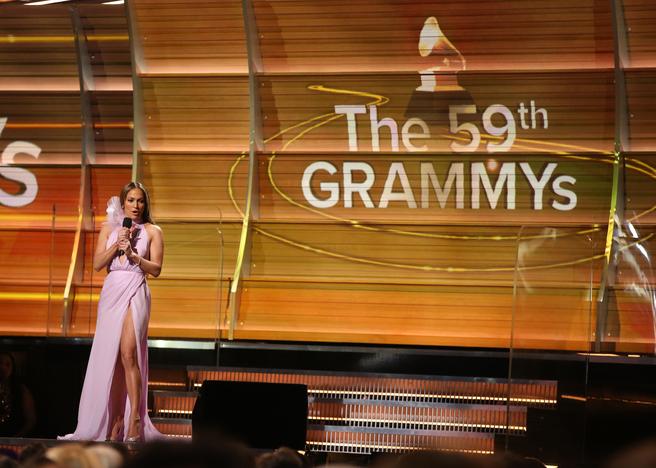 Singer Jennifer Lopez speaks at the 59th Annual Grammy Awards in Los Angeles, California (Lucy Nicholson / Reuters).
Political Talk
The artists on the red carpet and during the show expressed themselves about the divisive political climate in both dress, song and speeches. Transgender actress Laverne Cox asked people to Google Gavin Grimm, a transgender student whose case against so-called bathroom bills will be considered by the US Supreme Court.
Tribe Called Quest with Anderson Paak sang "We the People" and ended with a line of rappers with their hands held in the air in fists shouting, "Resist."
Paris Jackson, the 18-year-old daughter of pop icon Michael Jackson, called for support of the protestors against the Dakota Access Pipeline. Jennifer Lopez was more subtle, but clear when she called for action. "There is no time for despair, no place for self pity, no need for silence, and no room for fear," Lopez said.
Katy Perry's debuted a metaphor-heavy new single "Chained in Rhythm," about complacency in pop music that ended with Perry and singer Skip Marley standing in front of an image of the U.S. Constitution.
Singer Joy Villa walked the red carpet with President Donald Trump's "Make America Great Again" slogan emblazoned on her gown, but she garnered a lot of criticism online for the obvious attention-grabbing stunt. 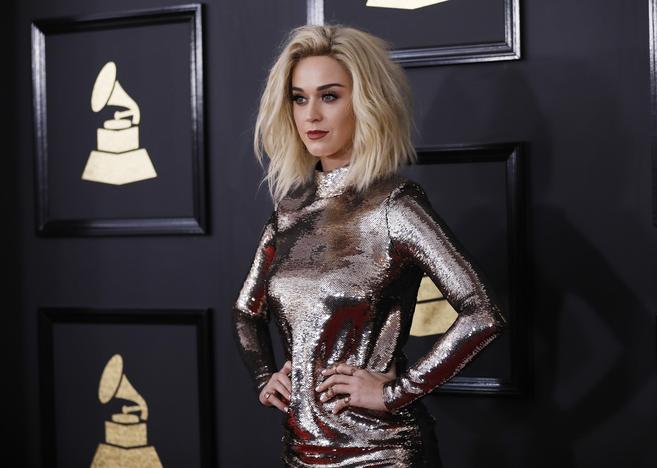 Singer Katy Perry arrives at the 59th Annual Grammy Awards in Los Angeles, California (Mario Anzuoni / Reuters).
Mars Attacks
Blue Ivy wasn't the only one channeling the Purple One. Bruno Mars dazzled in his impression of the late musical icon Prince, performing in a sparkly purple coat and wailing on a white guitar like the one Prince played.
Along with Prince collaborators The Time, the medley of songs included "Jungle Love," ''The Bird," and "Let's Go Crazy." It was a fitting reminder of his incredible catalog, which was also released to most streaming music outlets the same day as the Grammys.