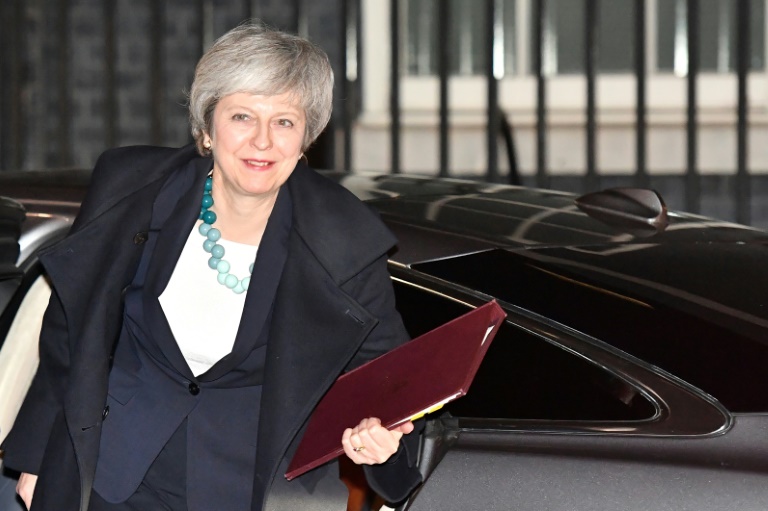 Embattled British Prime Minister Theresa May launched a tour of European capitals on Tuesday in a desperate bid to salvage her Brexit deal, a day after delaying a parliamentary vote on the text to avoid a crushing defeat.

May held talks in The Hague with Dutch Prime Minister Mark Rutte before heading to Berlin to meet Chancellor Angela Merkel as she struggles to unite British lawmakers behind her faltering plan.

She was then to see EU President Donald Tusk and European Commission chief Jean-Claude Juncker in Brussels.

“I’m surprised because we had reached an agreement on the 25th of November” at the last EU summit, Juncker told the European Parliament in Strasbourg on Tuesday, dubbing Brexit a “surprise guest” at this week’s summit.

“The deal we have achieved is the best deal possible, it’s the only deal possible. There is no room whatsoever for renegotiation but of course there is room, if used intelligently, to give further clarification and further interpretations,” he said.

Tusk said the other 27 EU leaders would discuss Brexit at a special meeting on Thursday, at the start of a pre-planned summit in Brussels which May will attend.

Irish Foreign Minister Simon Coveney told national broadcaster RTE that Dublin ruled out changes to the wording of the withdrawal agreement but said there could be “a political declaration coming from a European Council”.

“The Irish government doesn’t have an issue with providing reassurance if that’s helpful,” he said.

The embattled May is facing a rebellion in her own party and from parliamentary allies over a clause in the deal relating to Northern Ireland that is threatening to sink both the agreement and her leadership.

“I will now do everything I possibly can to secure further assurances,” May told mutinous MPs Monday on her dash to Europe ahead of the EU summit.

If no deal is secured, Britain will still have to leave the EU on March 29 with the government warning a no-deal Brexit will be hugely damaging to the economy.

Anand Menon, European politics professor at King’s College, London, said May needed Brussels to make it “absolutely clear” no major concessions are on offer — no matter who is prime minister.

“What they might do is add some language to the political declaration, not the withdrawal agreement,” he added.

“I imagine they’ll add some language saying that both sides remain convinced that we’ll never need to use the backstop”.

MPs had been due to vote on Tuesday on the deal with Brussels, which covers the terms of Britain’s withdrawal from the European Union after 46 years.

But facing a huge rebellion of her own Tory MPs, primarily over the backstop clause designed to keep open Britain’s border with Ireland, May conceded she expected to lose and delayed it.

The decision sent the pound plunging and both sides said they would step up preparations for a no-deal Brexit.

May suffered a barage of scathing headlines on Tuesday, with the Sun calling her move a “Brexmas Turkey” while the Guardian called it “desperate”.

The right-leaning Daily Telegraph carried the headline “the lady is for turning”, an uncomplimentary comparison to former leader Margaret Thatcher.

In a sign of the uproar, an opposition Labour MP was ejected from the House of Commons after picking up the ceremonial mace in protest at the government’s conduct.

The mace — a symbol of royal authority required to sit in its place for parliament to pass laws — was last taken from its place in protest in 2009.

Leader of the House and Tory MP Andrea Leadsom defended May on Tuesday saying she was aiming to secure “legally-binding reassurances” that Britain would not be indefinitely stuck in a backstop customs arrangement.

“The EU is always in a position where it negotiates at the last possible moment,” she told BBC Radio 4.

She said the assurances could take the form of “an addendum”.

Labour leader Jeremy Corbyn is facing calls to table a no-confidence vote in the prime minister.

“The government has lost control of events and is in complete disarray,” he said.

But Labour said it would hold off on trying to unseat May for now.