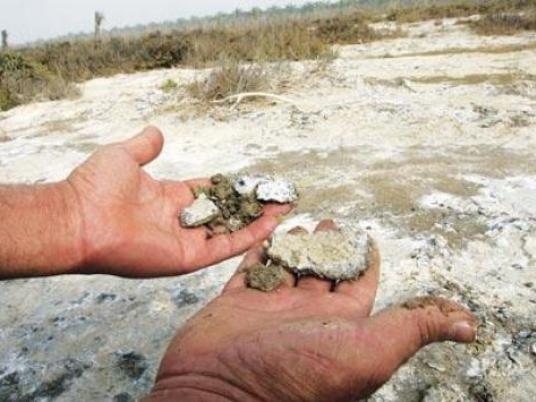 Every morning, hundreds of men converge on a dry lakebed in a remote corner of Ethiopia, where they cleave the ground open with handaxes to extract salt, just as their fathers and grandfathers once did.

They toil under the gaze of a caravan of camels who will carry their salt bricks to market, in a trek that historians estimate has gone on since the 6th century. But with the Ethiopian government opening the isolated northern region to investors and tourists by cutting new roads through surrounding mountains, the labourers, traders and caravan drivers that make up the industry say their traditional way of life could soon be lost.

"If it continues like this, it will stop our work," miner Musa Idris said as he stood on the cracked earth that fringes Lake Asale, where the miners work amid temperatures that can reach 50 degrees C (122 degrees F), making it one of the world's hottest places.

Salt mining was once so vital to the economy of the depression that the seven-kilogramme chunks of salt Idris and his colleagues hack from the ground were used as currency.

While the trade is still important, it is no longer the only game in town.

Restaurants and hotels have sprung up in the area, also known as the Danakil depression, to cater to tourists who come from across the globe to visit the uniquely desolate landscape formed by the intersection of three tectonic plates.

The region has also attracted foreign firms that want to mine potash and send it to Asia. The presence of salt in the area has not escaped the attention of mining companies.

A handful of kilometres away from where Idris and his colleagues gather, an Ethiopian company has built a plant that sucks water from the lake into evaporation ponds, creating salt the miners say is of a better quality but costs more than the square blocks they mine from the lakebed.

"The traditional way is quite different from ours. That one takes more toil and time," evaporation plant manger Maheri Asgedew said of the manual way of mining.

Asgedew predicts that his plant, which only recently went into operation, would one day be the main supplier of salt in the area.

From Camels to Trucks

Perhaps no development has impacted the traditional salt industry like the new roads.

Ethiopia is Africa's second most populous country and one of the continent's best-performing economies, with growth reaching nearly 10 percent in 2015.

The government has made projects such as dams and road-building a priority as part of its strategy to end the poverty that afflicts around one in three of its citizens.

Getting the salt-laden camels from Lake Asale to the nearest city Mekele used to be a four-day trek down rock-strewn gullies.

Now, the caravans terminate in Berhale, the region's main salt trading outpost which road builders connected to Mekele by tarmac about five years ago.

The journey takes only three days, an improvement that some of the camel drivers and labourers who help offload the salt bricks have welcomed, but which others worry is a sign that technology will soon put them all out of business. Getting salt-laden camels from Lake Asale to the nearest city Mekele used to take four days, but now caravans end at Berhale, connected to Mekele by tarmac five years ago (AFP / Zacharias Abubeker)

About 5,000 blocks of salt arrive each day at a trading post situated on a dry riverbed at the edge of Berhale, from which they are loaded onto trucks that take them as far away as neighbouring Kenya, said Ahmed Ali Ahmed, the deputy of an association of salt miners.

"The road has brought a lot of change, because we can easily transport salt to Mekele," Ahmed told AFP.

Ahmed is hopeful that, some day, they won't need to use camels at all.

"We hope there will be something like cars," he said. 'We don't have anything else' –

The Lake Asale miners like Idris have also grown tired of the industry's backbreaking labour and low wages, despite its long history in the area.

"We have no water and sometimes we eat bad food," said Musa, whose daily pay of 500 birr ($22, 21 euros) affords him a house in Hamed Ela, a ramshackle settlement of huts near the salt fields.

"If technology comes and changes it, it would be better."

But others embrace the traditional way. For them, it's simply the family business.

"We see this as our farmland, so we don't have anything else but this," miner Indris Ibrahim said. "My children and grandchildren will hopefully mine in this area."