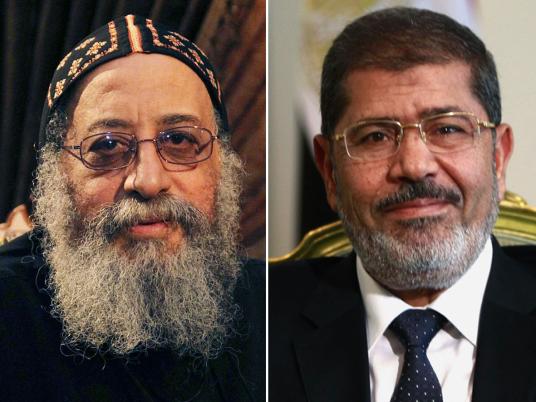 According to Ali, Morsy highlighted the necessity of unity for a better future and reaching consensus over the constitution.

However, a church source, which spoke to Al-Masry Al-Youm on condition of anonymity, said participants in the meeting did not discuss the withdrawal of churches from the Constituent Assembly.

The source said that Morsy received a high-ranking church delegation presided by the pope and Bishop Pachomius of Beheira to offer condolences over the death of Morsy’s sister.

“The meeting lasted for no longer than 15 minutes, during which the pope offered condolences and thanked him for approving him as the new church patriarch,” the source added.

“The visit took place according to protocol in place since the royal era, as popes used to visit the head of the state after ordination,” the source said, adding that some church figures have expressed reservations about this protocol.