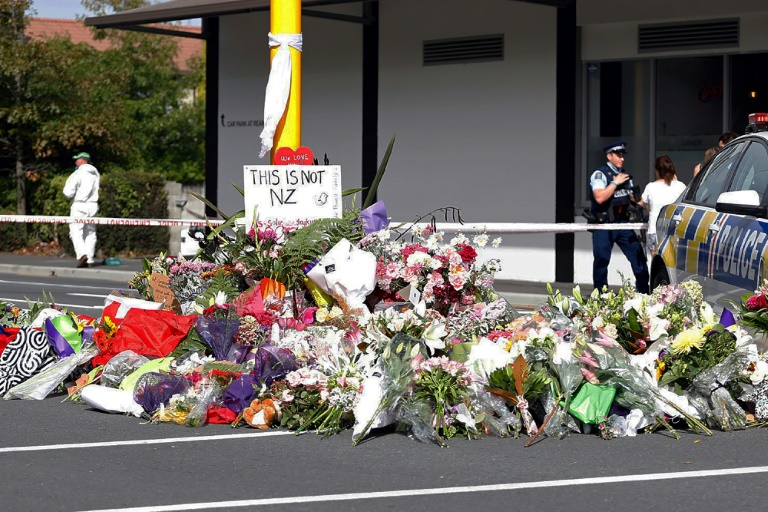 The right-wing extremist charged over the horrifying attacks on New Zealand mosques flashed a white power gesture as he appeared in court Saturday, while a shellshocked community began digging graves for the 49 people he stands accused of slaying.

Australia-born 28-year-old Brenton Tarrant stood largely impassive in the dock wearing handcuffs and a white prison smock, as the judge read the first of what are expected to be a host of murder charges he is likely to face.

He did not request bail and was remanded in custody until an April 5 court appearance.

Outside the courtroom, Christchurch residents struggled to deal with the aftermath of what is thought to be the worst act of terror against Muslims in the West.

Nearby, excavators were called in to remove the vast amount of earth needed to bury the dead, although police have not yet released the bodies to anxious families.

In a nearby hospital, doctors worked round the clock to treat 39 people for gunshot wounds and other injuries sustained in the attacks.

The wounded included a two-year-old boy and a four-year-old girl, who was in critical condition.

The attack on the Al Noor and Linwood mosques has prompted an outpouring of grief and deep shock in this usually peaceful country, which prides itself on welcoming refugees fleeing violence or persecution.

Throughout the day people laid flowers at a makeshift memorial just beyond the police cordon around the Al Noor mosque, where most of the victims died.

Many offerings were accompanied by handwritten letters laden with sadness and disbelief, from residents of what one local driver called the “city of sorrow”.

“I am so sorry that you were not safe here. Our hearts are breaking for your loss,” read one of the notes.

When the police tape was lifted late Saturday, bystanders spontaneously joined police in moving the stack of bouquets closer to the mosque.

An imam who was leading prayers at the Linwood mosque at the time of the attack said the Muslim community would not be shaken by the massacre.

“It was a very bad day, not just all of us, all of New Zealand,” said Ibrahim AbdulHalim. But, he added: “We still love this country”.

Muslims make up just one percent of New Zealand’s population.

Prime Minister Jacinda Ardern arrived in the city and, wearing a black headscarf, met with survivors and victims’ families.

Ardern said the victims came from across the Muslim world, with Turkey, Bangladesh, Indonesia and Malaysia among the countries rendering consular assistance.

At least one Saudi citizen and two Jordanians were among the dead, while five Pakistani citizens were missing.

Sahra Ahmed, a New Zealander of Somali origin, said she was touched by the PM’s gesture.

Police are now trying to piece together answers to the difficult questions of why and how this happened.

They want to know how it was possible for the perpetrator to remain undetected by the intelligence services despite his extremist views.

Ardern said the shooter was “in possession of a gun licence” obtained in November 2017, and he started legally purchasing two semi-automatic weapons, reportedly AR-15s, two shotguns and a lever-action gun the following month.

Ardern said some of the guns had been modified to make them deadlier.

“I can tell you one thing right now — our gun laws will change,” she said.

The suspect documented his radicalisation and two years of preparations in a lengthy, meandering and conspiracy-filled far-right “manifesto”.

He live-streamed footage of himself going room-to-room, victim to victim, shooting the wounded from close range as they struggled to crawl away in the main Christchurch mosque.

Thirty-six minutes after the police received the first call, Tarrant was in custody.

Commissioner Mike Bush hailed the “absolute bravery” of both police and members of the public “who put themselves in harm’s way” to apprehend the suspect.

“Their intervention may very likely have saved further lives.”

Two other people remain in custody, although their link to the attack is not clear. One man, 18-year-old Daniel Burrough, has been charged with incitement.

Revulsion at the attack, and tributes to the victims poured in from around the world, including from Pope Francis and Britain’s Queen Elizabeth II.

US President Donald Trump condemned the “horrible massacre” in which “innocent people have so senselessly died”, but denied that the problem of right-wing extremism was widespread.

Australian police said they had visited Tarrant’s childhood home in the town of Grafton, north of Sydney, and spoken to family members as part of their investigation.

The attack has prompted searching questions about whether right-wing extremism has been treated with enough seriousness by Western governments.

Ali Soufan, a former high-ranking FBI counter-terrorism agent, warned the West was “in the midst of a surge of right-wing terrorism that has been metastasizing in plain sight while generating only a muted response from domestic counter-terrorism authorities”.

Ardern said she “asked our agencies this morning to work swiftly on assessing whether there was any activity on social media or otherwise, that should have triggered a response”.

Embassy asks Egyptian community to be 'cautious' in New Zealand

A look at attacks on houses of worship over last decade