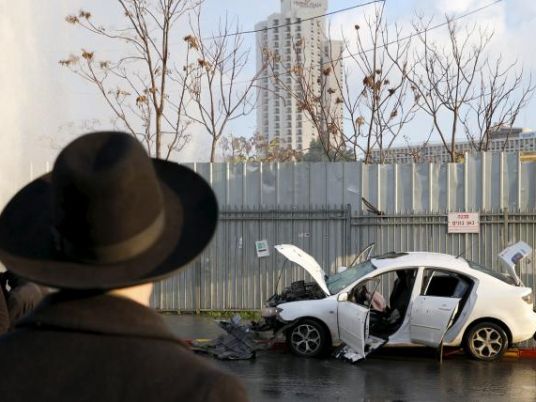 A motorist rammed into a bus stop in Jerusalem on Monday, injuring at least nine people before he was shot dead, Israeli police said, in what appeared to be latest in a surge of Palestinian street attacks.
The casualties from the incident near the western entrance to the city, leading to the Tel Aviv highway, included one person who was in serious condition and a baby, medics said.
Police described the motorist as a "terrorist" but did not immediately elaborate on his identity. Israel's Army Radio said he was shot dead by a bus stop guard.
A campaign of stabbings, shootings and car-rammings by Palestinians has killed 19 Israelis and a US citizen since the start of October. Israeli forces have killed at least 109 Palestinians, most of whom the army described as assailants.
Palestinians are frustrated at the failure of long-running peace efforts with Israel and its 48-year occupation of the West Bank. Many sympathize with calls by the Palestinian Islamist group Hamas for Israel's destruction.
The bloodshed has also been fueled by Muslim opposition to stepped-up Israeli access to Jerusalem's al Aqsa mosque complex, which many Jews revere as a vestige of their biblical temples.