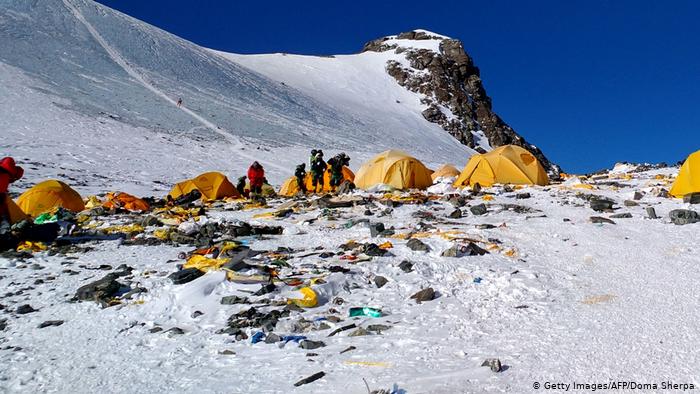 A 14-member team sent by the Nepalese government to tidy up Mount Everest has so far collected three tonnes (3.3 US tons) of garbage including cans, bottles, plastic and discarded climbing gear.

“The clean-up campaign will be continued in the coming seasons as well to make the world’s tallest mountain clean. It is our responsibility to keep our mountains clean,” said Dandu Raj Ghimire, the head of Nepal’s tourism department.

Mount Everest has suffered increasing pollution over decades, with climbers leaving behind not only garbage, but also fluorescent tents, empty gas canisters and human excrement.

The “Everest Cleaning Campaign” began on April 14 and is to run for 45 days, according to The Hindu news website. The team has been set a target of bringing back 10 tonnes of trash.

The campaign coincides with the opening of the spring climbing season, which will see hundreds of mountaineers trying their luck on the 8,248-meter peak, accompanied by more than 1,000 climbing support staff. Last year, a record 807 climbers reached the summit, first conquered by the Nepalese Sherpa mountaineer Tenzing Norgay and Edmund Hillary of New Zealand in 1953.

Pollution through garbage is not the only environmental threat faced by the mountain: Scientists warned on Tuesday that global warming is also affecting its appearance, with the Khumbu Icefall on Everest’s Nepali side likely to disappear within decades.

Melting glaciers on the mountain have also exposed more trash and even human bodies that have accumulated there over the years.

Robinson Crusoe island sets example for the world in conservation

Tipples and trash: A Japan waste plant opens its doors