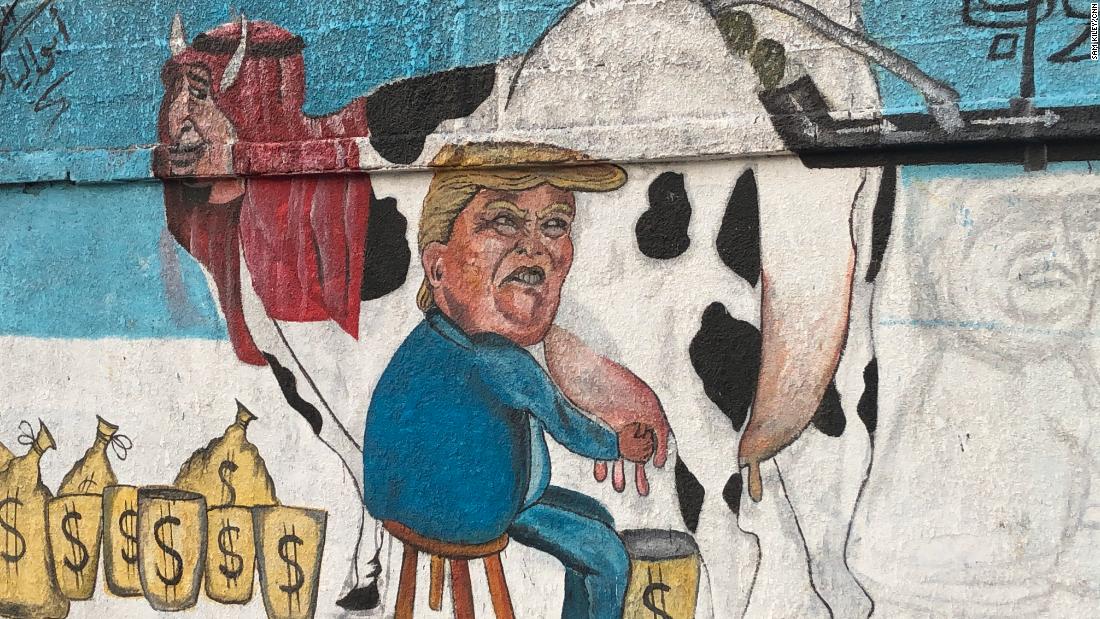 A huge mural in downtown Hodeidah shows a cow with the horned head of King Salman of Saudi Arabia. At the other end of the beast, US President Donald Trump tugs on its udders — filling golden pails.
They’ve got dollar signs on them.
It’s a graphic display of how people in the north of Yemen see America’s role in a war that’s been tearing into the fabric of their country for exactly four years.
The US is Saudi Arabia’s biggest arms supplier. The jets and the bombs they drop as well as the tanks, artillery pieces and vehicles used by Saudi Arabia and the United Arab Emirates, who lead a coalition against Yemen’s Iran-backed Houthi movement, are mostly US-made.
Without them, the coalition forces on the outskirts of Hodeidah would not have been able to threaten the port city, the Houthis believe.
So, at a demonstration marking the fourth anniversary of the war on Tuesday, protesters yell “Death to America”, and inevitably “Death to Israel.”

The old trope of a “Zionist plot” is so strongly believed here that other murals show the Saudi King sporting an outfit emblazoned with the blue Star of David.

Hundreds of demonstrators formed up in neat lines during the rally. They clearly had to — white lines had been painted on the road a few yards apart but getting closer together the nearer they got to the stage.
The effect at ground level was to create the impression of a much bigger crowd.
But there was no faking the passion of some who attended on a blisteringly hot day.
“How much blood, how many parts of our body do you want to stop the war?” Ali Khammash, a teacher, nearly yelled as I interviewed him.
News that the US Senate voted to cut assistance to Saudi Arabia’s involvement in the war, in opposition to Trump’s policy, did nothing to impress him.
“Our people and our children tell us the USA kills us. Every day it kills us. Kill us in my school. Kill us in the wedding. Kill us in the park. Kill us in the garden. Kill us in the street. Everybody thinks the USA kills us.”
English literature professor Abdel al Montasser echoed the message of the Saudi cash-cow mural, saying that US leaders are “thinking of their own benefits. Saudi Arabia and Gulf countries, they are rich. So the US wants to milk them — like Trump”.
It would have been impossible to hold such a rally until a ceasefire for the city was agreed at talks between the coalition, which backs the Yemeni government, and Houthi rebels in December last year.
The truce holds, just. At night neither side can resist an occasional exchange of fire. And the Houthis continue to restrict access to the city for humanitarian workers.
They’ve also been accused of dragging their feet on allowing the United Nations to run the port, which is the lifeline to the outside world for the north of the country where 70 percent of Yemenis live.
And of failing, as agreed, to hand over control of Hodeidah to the local police force.
Related article: Bomb that killed 40 children in Yemen was supplied by the US
But in the Houthi-controlled areas the streets are busy — crammed with cars that are forced to zigzag around earth mounds that block alternate lanes as a defensive measure against invaders.
Shops are full of food and brightly colored plastic children’s toys. Now that mobile phone networks have been repaired, the stores stocking them are doing a brisk trade.
But in al Thawra Hospital, the scenes are very different.
It’s close to the front line. Its entrance was bombed a few months ago. This is where the war is felt even if, in Hodeidah, the numbers of wounded have fallen dramatically.
The staff know they could be a target — other hospitals and clinics have been hit in air strikes.
Intensive care head nurse Hoda Solliman explained why she keeps coming to work even though her family begs her not to.
“If you see people who can’t find medical care, then we have to rescue them, even if this hospital is under bombardment. When there were clashes, we remained here. When they attacked the hospital, we stayed here. If we don’t relieve the suffering of this people, who will?” she said.
Most serious cases are transferred on a seven-hour drive to Sanaa, the country’s capital that has been controlled by the Houthis since they rose against the government of Abdu Rabbu Mansour Hadi.
But only if the patients can be moved.
Ayat lies inert in her bed. She cannot be moved. Weakened by malnutrition, she’s been assaulted by a host of illnesses — much like her country.
Yemen is among the poorest of nations at the best of times. It’s also riven by tribal and religious conflicts. The south, which is part of the alliance against the Houthis, is also fighting al Qaeda.
Some radical Islamist Salafi groups are fighting alongside forces of the Hadi government, the Saudis and the UAE close to Hodeidah – and they’re supported, for now, by the separatist Southern Transitional Council.
The Houthis, who are Shia unlike Sunni Muslim southerners, are backed by Iran, which has sent advisers and helped to build sea and air drones.
Caught in the middle are people like 10-year-old Ayat, whose frail body has been invaded by diseases that have attacked her liver and her kidneys — while malaria rages in her brain.
Next to her a smaller child is battling a meningitis infection that has already killed her brother.
And next to her lies a girl of 14, face down on her bed, machines beeping all around her as tubes feed her air and fluids and drain her bladder.
The World Food Programme says that 10 million Yemenis are “one step away from famine.” But they’ve shown remarkable resilience while Saudi Arabia and her allies have continued their proxy war with Iran.
But for this one teenager, the future seemed to hold nothing but misery.
Medics said that she comes from a destitute family and felt she was a burden. So she tried to hang herself.