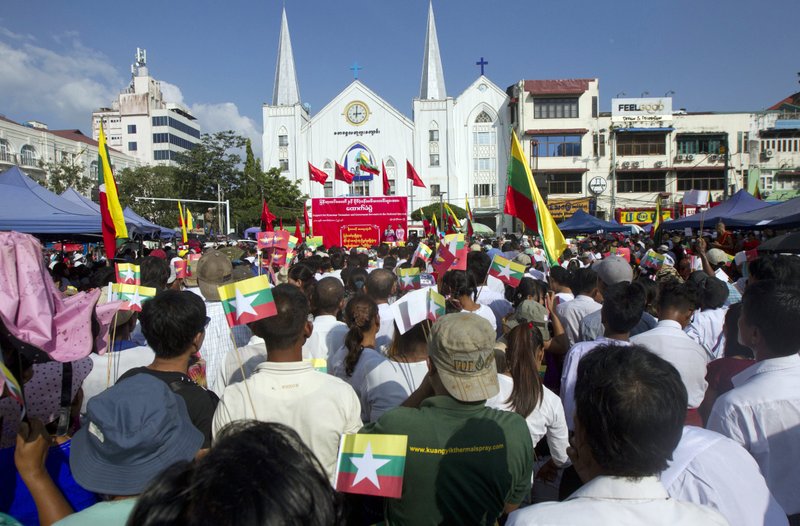 Activist Nyo Tun spent 10 years as a political prisoner locked away by Myanmar’s military in the notorious Insein prison, where he endured beatings and other cruelty for his efforts to bring democracy.

“The military government was so brutal for many years,” he said of the former junta, which ruled the country for decades until 2012 and then by proxy four more years — and still has a final say on security matters. “All they knew was how to torture anyone who was against them.”

Myanmar, long isolated both by choice and by international sanctions, has undergone a transformation in recent years. Another former political prisoner, Nobel Peace laureate Aung San Suu Kyi, was elected the head of a civilian government, which led to the easing of most sanctions and an influx of foreign investment.

Yet the most striking change may be the majority Buddhist Burman population’s view of its military: An institution once despised has seen its popularity surge alongside a rise in nationalism that has accompanied a crackdown on Rohingya Muslims in Rakhine state in western Myanmar that has left thousands dead and more than 650,000 displaced.

While most of the outside world is appalled by what UN and US officials have called “ethnic cleansing” that has grown into Asia’s worst refugee crisis in decades, many in Myanmar support it. They see the Rohingya as illegal migrants from Bangladesh who are a threat to national security and bristle at international condemnation of rights abuses.

That includes Nyo Tun, who says he was beaten, slapped, denied food and water and access to the toilet for days during his interrogation.

“The military dictatorship was in the past and the new military institution is much different,” he said, adding it was unlikely that the military was committing crimes in Rakhine. They are “defending the country and that’s how they get the support from people because it’s all about the national spirit for everyone.”

Thousands have rallied in cities across the country in support of the troops, known locally as the Tatmadaw. Commander-in-chief Senior General Min Aung Hlaing, who remains constitutionally beyond the control of Suu Kyi’s government, is regularly praised by the public on his official Facebook page.

The military said in November an internal investigation has absolved its forces of allegations of atrocities. However, citing credible evidence of mass killings, rapes and villages being burned, the US announced last month it had sanctioned Major General Maung Maung Soe, who until recently was chief of the army’s Western Command responsible for security operations in Rakhine.

“Long live the army and commander in chief,” said one recent Facebook comment. “The army has done well for the country, we are very proud of it,” said another. “Thank you for clearing all the Bengali terrorists,” read another.

Such praise was not only unheard of under the former junta, but it would have been practically impossible. The junta sealed off the country from outsiders for decades and its citizens were not allowed to watch international news let alone have access to the internet. People were prohibited from speaking about politics and rallies were banned.

The military has been locked in civil wars with ethnic rebels fighting for self-determination and indigenous rights. On the rare occasions when frustrations boiled over into attempted pro-democracy uprisings — such as in 1988 and 2007 — the military responded with overwhelming force that left hundreds dead or imprisoned.

“The Tatmadaw has gone from the most reviled institution to enjoying a renaissance, at least amongst the ethnic Burman population,” said David Mathieson, an independent political analyst who formerly worked with Human Rights Watch. “This curious adulation comes from a dark place though.”

Following its trouncing in the 2015 election, when voters sent a clear message that they would no longer tolerate military rule, the army has focused on a “winning formula of violence and vilification of the Rohingya and ethnic rebels,” he said. They also have a “thin veneer” of democratic credibility provided by Suu Kyi’s government.

The transition to democracy is “working beautifully for them, as remembrance of repression past fades within the general population,” he said.

Most alarming to many observers is the support the military has gained from the very activists and former political prisoners who once campaigned for the international community’s help in removing the generals from power. They now preach a gospel of nationalism and sovereignty.

“Because of the international pressure and criticism, people inside Myanmar are even more united under nationalism and people start to get stronger national spirit because this is not just a normal case, this is about the history and politics of our country,” said Ko Ko Gyi, another former political prisoner.

Rather than find solidarity with the oppressed Rohingya, some have been caught up in bigotry against them. They consider international reports of widespread rape and killings as “fake news.”

“Look at the appearances of Bengali people and their language and their religion and their facial appearance, how could rape be possible?” Nyo Tun said. “And now the world is pressuring us to accept more than a million of them. This is nationalism. How can we accept these people? We cannot do that.”

Some former political prisoners believe their colleagues have lost their way.

“Many people are being used by the army,” said Sithu Maung, a former student activist who spent more than four years in prison. “We have complexity of defining ethnic minority groups and the existence of minorities and these problems cannot be solved overnight. But any human rights activist should never be silent on any human rights violations no matter what kind of people are suffering.”

Mathieson said the military could find its newfound popularity to be fleeting.

“When people slowly realize that the military has still not budged on any democratic or constitutional reform, or that their ultra-violent behavior in Rakhine state has isolated the country and driven Myanmar back into the arms of China, resentment could return,” he said.