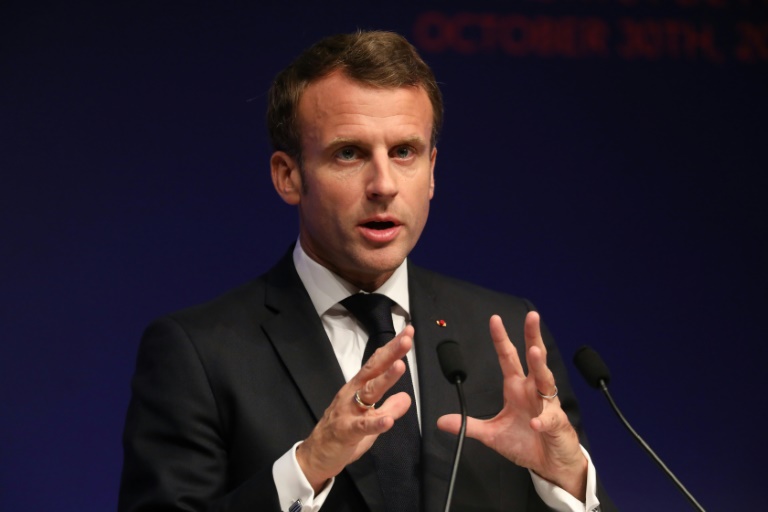 NATO partners argued Thursday over the alliance’s worth after French President Emmanuel Macron said it was undergoing “brain death,” prompting a fierce defense of the bloc from Germany, Canada and the US while drawing praise from non-member Russia.

“What we are currently experiencing is the brain death of NATO,” Macron told The Economist magazine in an interview published Thursday, ahead of a NATO summit next month.

But German Chancellor Angela Merkel defended the 70-year-old military alliance as “indispensible” and said Macron’s “sweeping judgements” were not “necessary.”

Addressing journalists by Merkel’s side, NATO chief Jens Stoltenberg warned that a weakened transatlantic alliance could “divide Europe”, while the US Secretary of State, also in Germany, insisted NATO was “important, critical.”

In the interview, Macron decried a lack of coordination between Europe and the US and lamented recent unilateral action in Syria by Turkey, a key member of the 70-year-old military alliance.

“You have no coordination whatsoever of strategic decision-making between the United States and its NATO allies. None,” he said.

“You have an uncoordinated aggressive action by another NATO ally, Turkey, in an area where our interests are at stake,” Macron added according to an English transcript released by The Economist.

After talks with Stoltenberg in Berlin, Merkel said Macron “used drastic words, that is not my view of cooperation in NATO.”

She added: “I don’t think that such sweeping judgements are necessary, even if we have problems and need to pull together,” while insisting that “the transatlantic partnership is indispensible for us.”

‘We have a problem’

Stoltenberg said any attempt to distance Europe from North America “risks not only to weaken the Alliance, the transatlantic bond, but also to divide Europe.”

In a recent setback for the alliance, a Turkish military operation against Kurdish forces in northern Syria was staunchly opposed by fellow members like France, but made possible by a withdrawal of US forces ordered by President Donald Trump.

For Macron, “strategically and politically, we need to recognise that we have a problem.”

“We should reassess the reality of what NATO is in light of the commitment of the United States,” he warned, adding that: “In my opinion, Europe has the capacity to defend itself.”

Pompeo, on a visit to the German city of Leipzig as part of anniversary events for the fall of the Berlin Wall 30 years ago, agreed.

“I think NATO remains an important, critical, perhaps historically one of the most critical strategic partnerships in all of recorded history,” he told journalists.

In Ottawa, Canadian Prime Minister Justin Trudeau told reporters the alliance continues to play “an extremely important role in not just the North Atlantic but in the world.”

Macron said it was crucial to seek rapprochement with Moscow, which regards NATO and its expansion into ex-Communist bloc states with huge suspicion given that the alliance was set up to counter the USSR.

“We need to reopen a strategic dialogue, without being naive and which will take time, with Russia,” said Macron, who wants to broker an end to the conflict in Ukraine and has courted President Vladimir Putin as a partner.

He said NATO did not reexamine its role after the collapse of the Soviet Union and “the unarticulated assumption is that the enemy is still Russia.”

And for all the anti-Western bombast from the Kremlin, Putin would find his long-term strategic options limited to “a partnership project with Europe,” the president said.

“If we want to build peace in Europe, to rebuild European strategic autonomy, we need to reconsider our position with Russia,” he insisted.

‘Edge of a precipice’

The French president, seen by many analysts as Europe’s most prominent leader amid Brexit and Merkel’s looming exit in 2021, has sought to stand tall on the foreign policy stage and to implement a vision of reforming Europe.

But he said the European Union was on “the edge of a precipice.”

“Europe has forgotten that it is a community, by increasingly thinking of itself as a market…,” said Macron, who recently blocked expanding the EU to include North Macedonia and Albania.

He also said he wanted European nations to break a “taboo” against using deficits to stimulate growth and investment.

Macron said the world was in turmoil, with a risk of the US and China becoming the sole global powers, and authoritarian regimes emerging in Europe’s own backyard.

“All this has led to the exceptional fragility of Europe which, if it can’t think of itself as a global power, will disappear, because it will take a hard knock,” he said.

US formally starts withdrawal from Paris climate accord