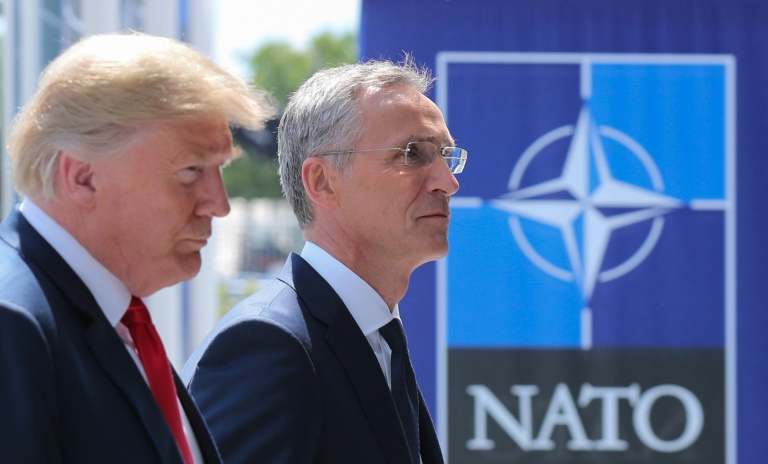 NATO Secretary General Jens Stoltenberg was due to meet President Donald Trump Tuesday ahead of celebrations for the 70th anniversary of the alliance, a frequent target of the US leader.

The White House visit comes before two days of talks in Washington among the 29 foreign ministers of the North Atlantic Treaty Organization, with the specter of Russia again topping the agenda.

Trump, in an unlikely role for the president of NATO’s founding member, has long questioned the usefulness of the alliance and characterized fellow members as freeloaders.

He has derisively questioned why NATO would defend tiny Montenegro and has been incensed that Germany, Europe’s largest economy, is not on track to meet a NATO target for each country to spend 2.0 percent of GDP on defense.

Stoltenberg, speaking to reporters before leaving NATO’s home base of Brussels, agreed that Germany should live up to commitments from a NATO summit in 2014.

“I expect Germany to make good on the pledge Germany made together with all other NATO allies,” said Stoltenberg, a former prime minister of Norway.

“I expect them to meet spending commitments, and they have submitted to NATO a national plan where they outline how Germany will increase defense spending in real terms by 80 percent over a decade.”

Kay Bailey Hutchison, the US ambassador to NATO, also voiced hope for more military spending by German Chancellor Angela Merkel but was more diplomatic than Trump.

“We need more from Germany because they are the strongest economy in Europe. They need to do more, they say they need to do more, so I know the will is there of Chancellor Merkel,” she told reporters, noting that the German leader was navigating a complicated coalition government.

If spending questions are dividing NATO, most alliance members share concerns about Russia which backs separatists in a low-intensity war in Ukraine from which it seized the Crimean peninsula in 2014.

“We will be looking at ways to do more in the whole Black Sea region. We will be doing more surveillance, there will be more ships in the Black Sea from NATO countries, and there are sanctions that have already been imposed” over actions against Ukraine, Hutchison said.

Stoltenberg said the foreign ministers will likely agree to step up support to Ukraine as well as Georgia, including through training maritime forces and coast guards and further port visits and exercises.

He said NATO will also discuss further steps after the collapse of the Intermediate-Range Nuclear Forces treaty, with the United States and its allies saying that a Russian missile system has negated the key Cold War pact.

Stoltenberg will address a joint meeting of Congress on Wednesday.

But the anniversary will be comparatively low-key, with NATO waiting until December to hold a full leaders-level summit in London.

Macedonia signs accord to join NATO despite Russian misgivings