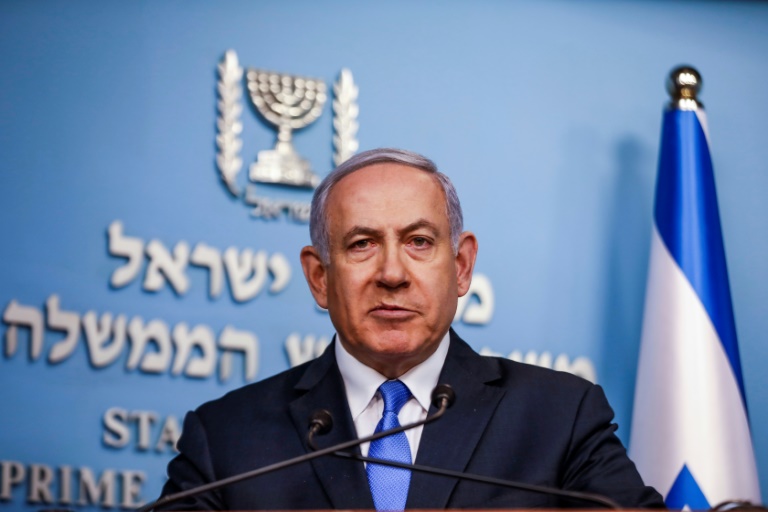 Netanyahu said late Saturday he planned to apply sovereignty over at least parts of the occupied West Bank, a move that could prove the death knell for the two-state solution to the Israeli-Palestinian conflict.

His remarks were widely seen as an appeal to right-wing voters ahead of what is expected to be a close election on Tuesday.

Benny Gantz, the former military chief whose centrist Blue and White alliance has posed a stiff challenge to Netanyahu, condemned the premier’s remarks in an interview with Israeli news site Ynet.

“Why not ask how in 13 years Netanyahu could have annexed and didn’t?” said Gantz, in reference to Netanyahu’s time as premier.

“I think that releasing a strategic and historic decision in an election campaign bubble is not serious and (is) irresponsible.”

“We said we will strive for a regionally and globally backed peace agreement while maintaining our basic principles,” he said.

Those principles include keeping security control of the Jordan Valley, parts of which are in the West Bank, and maintaining the large settlement blocs in the West Bank.

Gantz has in the past signaled openness to withdrawing at least some settlers from other areas.

He labelled Netanyahu’s remarks as “a meaningless statement”.

“It’s a shame to play with people like that,” he said.

Netanyahu did not provide details on how quickly he planned to move ahead with annexation and whether it would involve all settlements.

If done on a large scale, annexation could end already fading hopes for a two-state solution with the Palestinians.

It is a move the Israeli far right has long pushed for.

“I will apply (Israeli) sovereignty, but I don’t distinguish between settlement blocs and isolated settlements,” he said in an interview with Channel 12 television.

Settlements built on land occupied by Israel in the 1967 Six-Day War are deemed illegal by the international community and their ongoing construction is seen as a major barrier to peace.

But Netanyahu’s right wing government has had strong support from US President Donald Trump, who declared the disputed city of Jerusalem Israel’s capital in 2017 and later recognized Israeli sovereignty over the annexed Golan Heights.

That prompted Palestinian president Mahmud Abbas to cut off relations with Washington.

In a separate interview broadcast Friday, Netanyahu said he told Trump he would not remove settlements or settlers as part of a future American peace plan.

“I said there shouldn’t be the removal of even one settlement,” Netanyahu told Israel’s Channel 13 television.

More than 400,000 Israelis live in West Bank settlements, backed by Israel’s military occupation of the territory, home to more than 2.5 million Palestinians.

A further 200,000 Israelis live in settlements in occupied east Jerusalem, over which Israel has already implemented full sovereignty.

The Palestinians hope to establish a state of their own in the West Bank, east Jerusalem and the Gaza Strip.

Washington is expected to unveil proposals for Israeli-Palestinian peace some time after Tuesday’s election, in which Netanyahu is seeking a fifth term.

Netanyahu, running for re-election while facing the possibility of indictment on corruption charges, said he had informed Trump not “even one person” would be evicted from a settlement.

The US president on Saturday was cautious about the outcome of Israel’s upcoming election.

The latest polls place Netanyahu and Gantz neck-and-neck, but give the former the advantage in his ability to form a coalition government.

Turkey accused Netanyahu on Sunday of raising annexation as a means of improving his standing in the elections.

“Prime Minister Netanyahu’s irresponsible statement to seek votes just before the Israeli general elections cannot and will not change this fact.”

The Palestinians say the US government’s pro-Israel bias meant it could no longer mediate between them and Israel.

US officials say their plan will be fair.