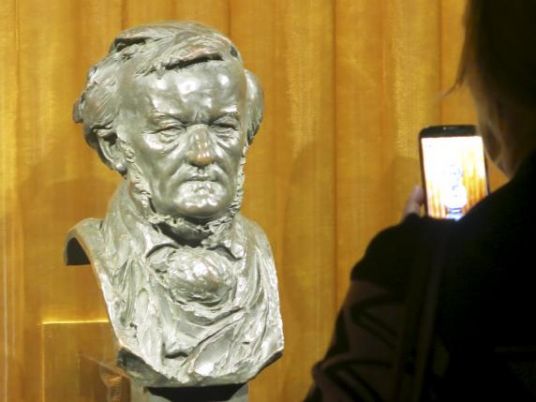 A renovated Richard Wagner Museum opening in Bayreuth this weekend to coincide with the Bavarian city's annual Wagner opera festival puts the composer's anti-Semitism and his family's later ties to Adolf Hitler center stage for the first time.
Revamped and doubled in size at a cost of 20 million euros (US$21.92 million), the museum for the first time displays Wagner's anti-Semitic screeds, which he published in his youth anonymously, then under his own name before he died in 1883.
It also depicts the close ties his widow Cosima, who died in 1930, and his descendants forged with Hitler, who loved Wagner's music and regularly visited Bayreuth to hear operas in the "Festspielhaus" that Wagner designed and built in the 1870s.
"When the museum was opened almost 40 years ago it was not complete," museum director Sven Friedrich said during a press tour on Friday, before the public opening on Sunday.
"It should be not only about his music and his operas but also the reception of his work in later decades and the relations of his family with Hitler."
The complex of three buildings, the main one brand new, contains an array of opera costumes, audio-visual displays, a cinema and a cafe, and will have changing exhibitions.
Most of this is contained in a new glass-and-concrete, largely subterranean main building built alongside Wagner's Bayreuth home "Wahnfried", which he built in the 1870s and which suffered major damage in an Allied bombing raid at the end of World War Two.
"Wahnfried" also has been restored with many original furnishings, but Friedrich said it was not a "composer Disneyland" and anything not original is draped in white cloth.
None of the famously quarrelsome Wagner descendants, including his great-granddaughter Katharina Wagner, director of the Bayreuth Festival, or her half-sister Eva Pasquier-Wagner, the outgoing co-director, had yet seen the new museum, but the family "have given pieces" for the renovation, Friedrich said.
Dedication speech by grand-granddaughter
Nike Wagner, another great-granddaughter who in the 1990s lost out to Katharina in a bid to become the Bayreuth director, will give the dedication speech at the opening, officials said.
The museum compound also includes a house formerly occupied by Wagner's son Siegfried, who died in 1930. The rooms of Siegfried's Welsh-born widow Winifred, who became close to Hitler, will be open for the first time.
Also in the Siegfried house, the museum devotes significant space to Wagner's anti-Semitic essays, the texts of which are displayed on oblong video monitors on the ground floor.
These texts, and some of the nationalistic themes and racial undercurrents in his operas, made Wagner a Nazi favorite.
There also is a temporary exhibition in the main building showing the Wagner family's close ties to the Nazis, including a photograph of two Wagner nieces standing arm-in-arm with Hitler during one of his visits in the mid-1930s.
This dark side to Bayreuth has been on display in the city before, notably with an exhibition on the "Green Hill", right outside the opera house, of life-sized panels showing Jewish musicians and singers who had worked at Wagner's festival but were banned under the Nazis.
Many of them went into exile or died in Nazi extermination or labor camps.
But it is new for the museum, where a reporter in 2007 wrote that he could only find one tiny photo of Hitler.
"We have to see our history, and we have to work with this history," said Brigitte Merk-Erbe, the mayor of Bayreuth, which contributed 7 million euros towards the renovation.
The Bavarian city, and regional officials, are hoping the museum attracts people who know little about Wagner, as well as the diehards who sell out the Bayreuth Festival every year.
"For the whole Wagner family worldwide, Bayreuth is the city of Wagner, so I think the 7 million (euros) are put to good use," Merk-Erbe said.