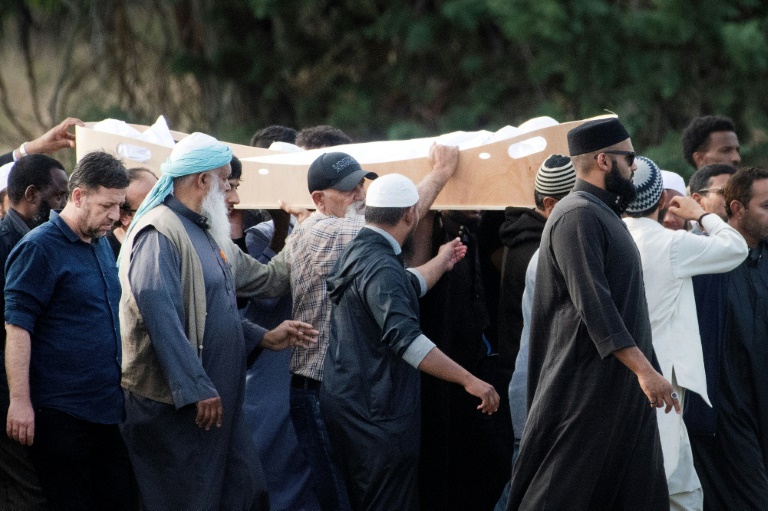 A Syrian refugee and his son were buried in New Zealand on Wednesday in the first funerals of those killed in the twin mosque massacre as Kiwis braced for days of emotional farewells following the mass slayings.

An Australian white supremacist is accused of gunning down 50 Muslim worshipers and wounding many more at two mosques in the southern city of Christchurch last Friday in a killing spree that he live-streamed.

Alleged gunman Brenton Tarrant’s use of social media has put the spotlight on extremists’ use of such platforms, and New Zealand’s Prime Minister Jacinda Ardern called on Wednesday for a global “united front” on the issue.

Hundreds of mostly Muslim mourners gathered in the morning at a cemetery near Linwood Mosque, one of two places of worship targeted, to lay Khalid Mustafa and his son Hamza to rest.

The family arrived last year as refugees from the Syrian maelstrom only to find tragedy in a land where they had sought sanctuary.

Khalid, 44, and Hamza, 15, were shot dead at the al-Noor Mosque, the first attack site.

Khalid leaves behind a wife, daughter and son Zaid, 13, who was wounded in the shootings.

In a powerful scene, Zaid sat in a wheelchair, his hands held aloft as he prayed alongside rows of mourners.

Jamil al-Biza, who came from the Sydney area to attend the funerals, told AFP that Zaid said at the graves of his brother and father: “I shouldn’t be standing in front of you. I should be lying beside you.”

Also attending was Abdul Aziz, an Afghan refugee who confronted the gunman at Linwood Mosque. He was embraced by many mourners.

In a sign of lingering tensions, the PA system at the funeral announced evacuation procedures from the venue in the event of an emergency, mourners said.

A total of six burials were expected on Wednesday.

Speaking of the Mustafa family, Ardern said: “I cannot tell you how gutting it is to know that a family came here for safety and for refuge, and they should have been safe here.”

“There is an argument there to be made for us to take a united front on what is a global issue,” she said at a press conference in Christchurch.

“This is not just an issue for New Zealand, the fact that social media platforms have been used to spread violence (and) material that incites violence.”

She had called on New Zealanders on Tuesday to deprive Tarrant of the publicity he craved by never uttering his name.

“He is a terrorist. He is a criminal. He is an extremist. But he will, when I speak, be nameless,” she said.

The 28-year-old was arrested after the shootings and is expected to spend his life in prison as New Zealand has no death penalty.

Dozens of relatives of the deceased have begun arriving from around the world, some hoping to take bodies back with them.

The start of funerals should help ease pressure from Muslim families who have complained that investigations have delayed the handover of victim bodies, preventing the speedy burials prescribed under Islam.

New Zealand police commissioner Mike Bush said authorities needed to identify victims conclusively to avoid hindering the prosecution, but added that the majority of remains were to be given to families on Wednesday.

In a rambling “manifesto”, Tarrant had said he was motivated partly by a desire to stoke religious conflict between Islam and the West.

Erdogan, while campaigning for local elections, presented the attack as part of an assault on Turkey and Islam and warned anti-Muslim Australians would be “sent back in coffins” like their grandfathers at Gallipoli, a blood-drenched World War I battle.

Morrison said he had asked for the comments to be withdrawn.

Philip Arps on Wednesday became the second person charged in New Zealand with sharing the gruesome livestream video of the deadly attack.

Arps, 44, who was arrested the day before, was charged with two counts of distributing objectionable material under the Films Act and was remanded in custody after appearing in Christchurch District Court.

A teenager appeared in court earlier this week on the same charge.

Following the shooting, New Zealanders have begun answering government appeals to hand in their weapons.

John Hart, a farmer in the North Island district of Masterton, said it was an easy decision, tweeting: “We don’t need these in our country.”

'I Live! I Die!' -- New Zealand uses haka to heal after attacks