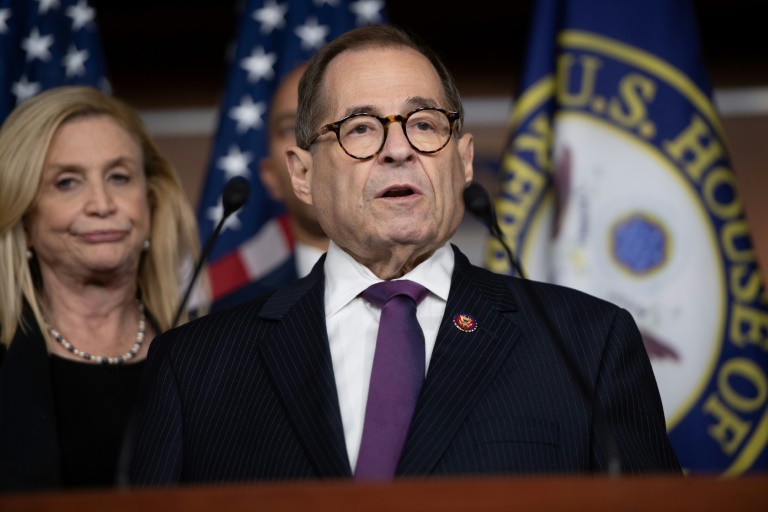 The House Judiciary Committee said Tuesday it would begin hearings on December 4 in the next phase of the impeachment inquiry into Donald Trump, inviting the US president and his lawyer to attend.

Lawmakers in the Democratic-led House of Representatives spent the last two weeks publicly questioning witnesses including White House officials and diplomats over allegations Trump abused the power of his office when he pressured Ukraine to launch investigations that would help him politically.

With that stage complete, chairman Jerry Nadler of the Judiciary Committee, which is tasked with considering whether to draft articles of impeachment against the president, said the first public hearing before his panel would begin at 10:00 am (1500 GMT).

“The committee looks forward to your participation in the impeachment inquiry as the committee fulfills its constitutional duties,” Nadler said in a letter to Trump.

Under procedural rules passed by the House last month, Trump is invited to attend the judiciary committee hearings, and “the president’s counsel may question any witness called.”

Nadler in his letter reminded Trump that if he continued to refuse to allow administration personnel to testify or turn over documents sought by the inquiry, the chair may “impose appropriate remedies,” including denying presidential requests to question witnesses.

Democrats leading the probe said ahead of Tuesday’s announcement that they could present their report detailing presidential wrongdoing as early as next week, when Congress reconvenes after the Thanksgiving break.

House Intelligence Committee Adam Schiff presided over two weeks of dramatic public hearings that he said uncovered a “massive amount of evidence” despite efforts to obstruct the investigation by Trump and his administration.

Those include a probe of a Ukrainian energy company where Hunter Biden, the son of Trump’s potential election rival Joe Biden, sat on the board.

Trump in recent months has repeatedly described the Bidens as “corrupt” despite no evidence of the family committing any wrongdoing related to Ukraine.

The remaining transcripts from closed-door impeachment interviews were released on Tuesday — including testimony from Mark Sandy, a career official in the White House’s budget office, who said an attorney at the office had resigned in part due to concerns over the hold on military aid to Ukraine.

Image: AFP / MANDEL NGAN US President Donald Trump said in an interview that he will designate Mexican drug cartels as terror groups