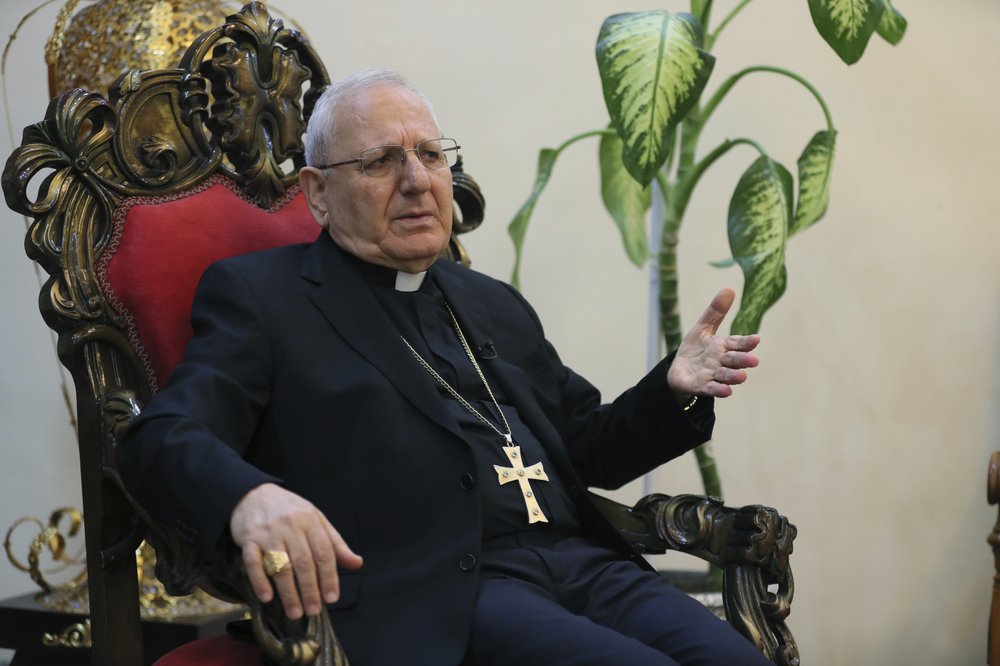 BAGHDAD (AP) — The Christmas tree in the middle of a central Baghdad plaza occupied by anti-government protesters is bare, save for portraits of those killed under fire from security forces. A tribute, the demonstrators explained, to a recent decision by Iraq’s Christians to call off seasonal festivities to honor the losses.

Leaders of Iraq’s Christians unanimously cancelled Christmas-related celebrations in solidarity with the protest movement — but the aims of their stance go deeper than tinsel and fairy lights. Slogans of a united Iraq free of sectarianism resonate deeply within the community, which since the 2003 fall of Saddam Hussein has fearfully observed its diminishing influence amid growing Shia-dominated politics shaping state affairs. Christians have also left Iraq in huge numbers over the years after being targeted by militant Sunni groups such as al-Qaida and the Islamic State group.

On a recent visit to Tahrir Square, the epicenter of the protest movement, Cardinal Louis Raphael Sako, patriarch of the Chaldean Church in Iraq, said he was moved.

“Now there you feel you are Iraqi,” he said in an interview with The Associated Press. “A new Iraq is being born.”

The protests erupted in Baghdad and the predominantly Shia southern provinces on Oct. 1, when thousands of Iraqis first took to the streets calling for sweeping political reforms and the end of Iran’s influence in Iraqi affairs. At least 400 have died at the hands of security forces and unidentified assailants firing live ammunition and tear gas to disperse the demonstrations.

“Morally and spiritually we cannot celebrate in such an atmosphere of tension … it’s not normal to celebrate our joy and happiness while others are dying. That doesn’t work,” said Sako. Chaldeans are the predominant Christian denomination in the country.

He called on the government and parliament to listen to the demands of the protesters and to find suitable solutions through dialogue. “The military solution is bad,” he said.

Under the order of the church, holiday celebrations will be limited to prayers, and money budgeted for expensive street decorations and festivities for the community will be donated to funds supporting wounded protesters, Sako said.

Christmas decorations were forbidden within the fine interiors of Baghdad’s Chaldean Patriarchate.

“We will have no other celebration, we cannot make a big feast when our country is a in a critical situation,” he added.

Falling demographics capture their existential anxieties, explained Sako. Christians numbered around 1.5 million before the U.S. invasion 16 years ago, roughly 6% of the population. Today the Christian population is believed to be less than a third of that figure, though accurate estimates are hard to come by given the lack of census data in Iraq.

During the onslaught by the Islamic State group in 2014, Christians were forcibly displaced and fled fearing persecution from the extremists. Those who returned found their homes destroyed and their communities forever changed.

“We have suffered a lot,” Sako said. “Since the collapse of the old regime many have been killed, others kidnapped, others threatened and left, and many homes and properties of Christians have been occupied by militias.”

“So the protesters are telling them (the government) we look for justice and stability and to be equal citizens. We ask for the same justice for ourselves,” he said.

Iraq’s particular brand of sectarian governance — called the “muhasasa” in Arabic — entitles political elites to govern based on consensus and informal agreements. But it has had the effect of empowering Shia-majority parties over other sects.

“The main thing we have suffered from the sectarian system is marginalization,” said Albert Elias, 50, a Christian civil activist known in Tahrir Square for his book stall where he hands out Bibles for free.

“The politicians come and tell us we are qualified and loyal, but then no one gives us positions in the government so we can have a say,” he said.

“We see that in reality we mean nothing to them.”

In Tahrir Square, he sees a model of his ideal Iraq. Young students sometimes stop by and ask him questions about his faith, leading to impromptu lessons.

“Did you know Christians were the first Iraqis?” he said to one unsuspecting youth on a crisp December day. In under 30 minutes Elias recounted seven centuries worth of history, from St. Thomas the Apostle’s bringing of Christian teachings to what is now modern Iraq through to the Arab Islamic conquests.

But the spirit of the uprising, and the risks associated with protesting in the square, transcends religious affiliation, said Elias. “We are all suffering the same thing. We share with them the risk. We are here and we don’t know when someone will attack us with knives.”

Mysterious attacks perpetrated by unknown assailants have recently spurred paranoia and fear in the square. On Friday, 25 people, including three policemen were killed when gunmen fired live rounds from cars in Khilani Square, which is close to Tahrir Square. The day before, several stabbing incidents occurred as demonstrators supporting political parties and Iran-backed militias withdrew from the square.

In Baghdad’s Karada neighborhood, once a religiously mixed area and now predominately Shia, trees covered in fake frost and stuffed Santas are still on display. But shoppers are more conservative in their choice of purchases compared to previous years, said Hakmat Dawood.

“We should not celebrate while the bloodshed continues,” he said.

Outside the mall stood a Christmas tree, wrapped in Iraq’s national flag.

Image: In this Thursday, Dec. 5, 2019 photo, Cardinal Louis Raphael Sako, patriarch of the Chaldean Church, speaks during an interview with The Associated Press in Baghdad, Iraq (AP Photo/Khalid Mohammed)

Century ago and today, Baghdad street a front line in revolt